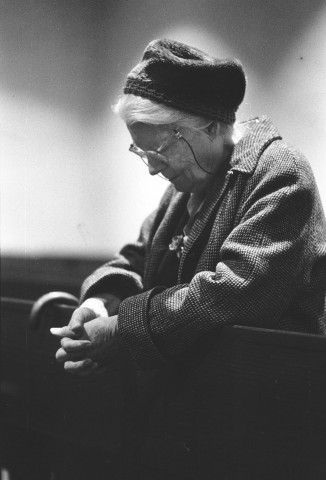 Dorothy Day, co-founder of the Catholic Worker Movement, is pictured in prayer at a church in New York in 1970. (CNS/photo © Bob Fitch)

This week, State Sen. Richard Black, R-Va., withdrew his candidacy for Congress after a two-day run. In Jan. 2013, Black wrote to Pope Benedict XVI stating that he was “revolted by the United States Conference of Catholic Bishops’ support for the canonization of [Dorothy Day] whose views supported the violent extermination of Christians throughout the world.”

The bishops’ conference unanimously voted to forward the canonization cause of Dorothy Day in Nov. 2012. Day co-founded the Catholic Worker movement in 1933, and her life was described in a USCCB press release as “marked by fidelity to the Scriptures, voluntary poverty, the works of mercy and work for peace and justice.”

In an email to NCR on Jan. 21, Black verified his letter to Benedict, stating, “I wrote to prevent canonization of" Day.

Black’s campaign for Virginia's 10th Congressional District officially commenced on Jan. 20, but surprisingly, he withdrew his candidacy by Jan. 22.

“After meeting with Republican Caucus leaders in Richmond, it is imperative that I remain in the Senate where I am needed to maintain our 20/20 split,” Black stated in a press release.

“As a state legislator, Black opposed making spousal rape a crime, citing the impossibility of convicting a husband accused of raping his wife ‘when they're living together, sleeping in the same bed, she's in a nightie, and so forth,’” Mother Jones stated.

In the same article, Mother Jones also noted how Black used the term “baby pesticide” to describe emergency contraceptive in 2001, described military rape “as predictable as human nature” in the late 1990s, and in opposition to gay marriage, claimed in 2004, “If I'm the last person on the face of this Earth to vote against legalizing sodomy, I'll do it.”

Writing to NCR, Black called Day “an apologist for the greatest mass murderers in all human history." He said that in his letter to Benedict, "In particular, I addressed [Day's] support for those who murdered Catholic priests in the most brutal fashion.”

Black is referring to a section of the two-page letter, in which he wrote, “I am particularly concerned about [Day’s] favorable writings regarding Lenin, Castro, Mao, and Ho Chi Minh. As you well know, each of the above dictators ordered the execution of Catholic priests among the millions of other Christians murdered…”

In the April 1948 Catholic Worker, Day wrote, “Why is THE CATHOLIC WORKER opposed to UMT [Universal Military Training] and to war? Because we are Communists? No! For we were opposed to World War II when the Communists were for it. … We are against war because it is contrary to the spirit of Jesus Christ, and the only important thing is that we abide in His spirit.”

In Black’s letter, however, he writes that “Ms. Day was the editor of the pro-communist newspaper, the Catholic Worker.”

Black also claims that The Catholic Worker was “a ‘front’ publication for the Communist party” according to “FBI files,” files that also offer “a recommendation that Dorothy Day be considered for custodial detention in the event of a national emergency.”

Day’s canonization cause carries a Nihil Obstat from the Vatican; in other words, the Vatican does not object to her cause moving forward. Because of this, Day officially carries the title “Servant of God.”

Even so, Black wrote in his letter to Benedict, “I am appalled that a woman [Day] of such loathsome character might be considered by anyone in this fashion.”

Instead of canonizing Day, Black has a different recommendation.

He reminded Benedict, “Pope Pius XII issued a decree of excommunication against anyone who collaborated with communists or joined their associations."