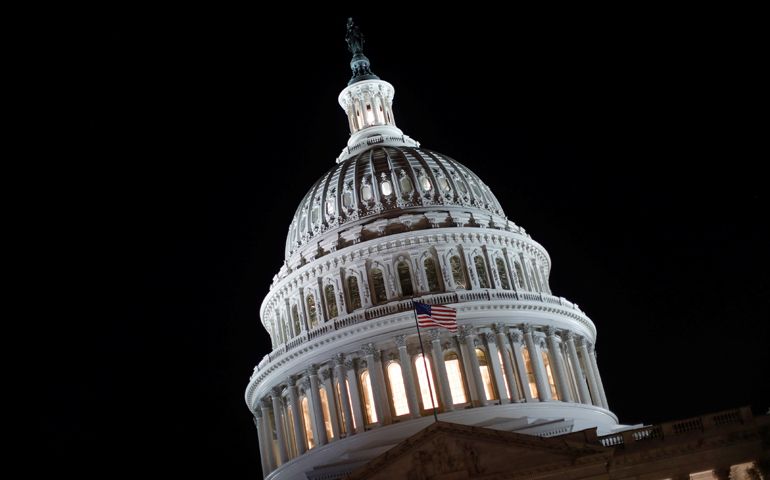 The U.S. Capitol is seen prior to an all-night round of health care votes on Capitol Hill July 27 in Washington. (CNS/Aaron P. Bernstein, Reuters)

I live on the edge of Washington, D.C., a city famous for lobbying, protesting and protestors risking arrest for important causes. And in the past few weeks, we've seen it all — an all-out attempt to save lives by defeating a string of disastrous Republican health care measures. In the middle of the night — Friday morning really — the final decisive vote was cast, and Republican-style health care (which would deny care to millions who have it now through Obamacare) drew its last breath (or at least many of us hope so).

The truly decisive votes came from Sens. Susan Collins, Lisa Murkowski and John McCain: all Republicans. Life has surely not been easy for them these last few weeks, so three cheers for their courage in bucking the tide.

But the real credit goes to the thousands of lobbyists and protestors who gathered in town halls across the country in multiple occasions, the people who demonstrated and risked arrest here on Capitol Hill (including many faith leaders), and the millions who lobbied in person, wrote letters and made phone calls to express their displeasure with the legislation.

Leading the way for Catholics was NETWORK, a social justice lobby that was highly instrumental in the original passage of Obamacare. The leader of NETWORK, Social Service Sr. Simone Campbell once again led the way. She organized Catholics nationwide to protest the legislation proposed by Republicans, and once again she (and the American people) emerged triumphant!

After the defeat of the bill, Simone credited two women senators with the key efforts in defeating the legislation:

"I am especially grateful to the leadership of Senators Murkowski and Collins throughout this fight. It is clear to me that they were moved and motivated by the stories of their constituents who would be hurt by this legislation. They were not intimidated by the offer of partisan buyouts. I particularly appreciate their commitment to dialogue that seemingly shaped Senator McCain’s views on the Senate floor last night."

Where were the Catholic bishops? They did manage to release a statement saying that "the loss of affordable access for millions of people is simply unacceptable" … but hard lobbying? Organizing a base? Not noteworthy, if they did it at all.

No, the real "bishops" in the struggle were the women and men of NETWORK.