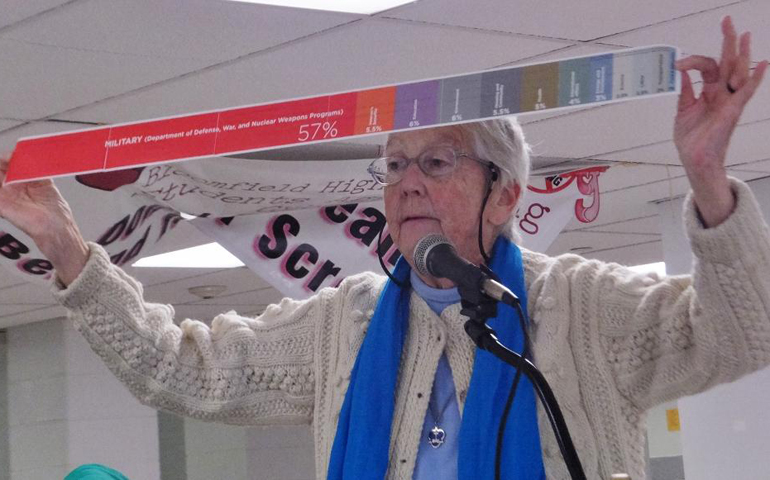 Sr. Megan Rice holds up a measuring scroll produced by the American Friends Service Committee showing that United States spends 57 percent of its revenue on militarism, more than other nuclear-armed nations. (GSR/Patricia Lefevere)

On July 28, 2012, Society of the Holy Child Jesus Sr. Megan Rice, 86, along with two other activists in the Transform Now Plowshares movement, broke into the government's premier nuclear storage facility in Oak Ridge, Tenn. The three were convicted in May 2013 for damaging federal property and obstructing the national defense of the U.S. Rice was sentenced to 35 months and was released May 16, 2015.

Janice Sevre-Duszynska, along with Max Obuszewski of the Baltimore Nonviolence Center, interviewed Rice July 10 at the Jonah House in Baltimore, less than a month before the 71st anniversary of the bombing of Hiroshima and Nagasaki. This interview has been edited for length and clarity.

Sevre-Duszynska: Why is it important to talk about nuclear weapons, especially as we commemorate the 71st anniversary of Hiroshima-Nagasaki?

Rice: Mainly, I think it's important to wake people up. They've gone to sleep for 70 years by the intent of the government from the beginning. People weren't consulted in the building or use of these horrific weapons. It was all very secret and very contained. Even during the production of nuclear weapons, one worker didn't know what the other was doing.

… What happened at Hiroshima and Nagasaki is not in the textbooks. It was unspeakable to have any discussion of the suffering and death of hundreds of thousands of Japanese in Hiroshima and Nagasaki. Moreover, the decision-makers were in denial. There were scientists who worked on the Manhattan Project who did try to warn government officials about using these awful weapons. After the Trinity Test at Los Alamos, N.M., in 1945, Robert Oppenheimer, director of the Manhattan Project, recognized the destructive nature of the atom bomb and (possibly) began to have reservations about its use. The test proved that the bomb worked and that it would cause tremendous devastation. There was never a weapon like it in history.

… After Germany was defeated, a number of scientists did not want the bomb to be used. One alternative would have been to explode it over a deserted island with the hope that Japan would recognize its destructive nature and surrender. … Unfortunately, the development of nuclear weapons continues. One or two of today's atomic bombs could destroy the planet.

Do we keep Hiroshima-Nagasaki out of our mindset?

Many people do not have a personal connection unless they are Japanese or are humanitarians who have visited Hiroshima and Nagasaki. Some of the U.S. soldiers who were part of the occupation forces in Japan suffered from PTSD after seeing the destruction caused by the A-bombs.

There were people who did speak out to condemn the use of nuclear weapons. Some veterans were affected physically and emotionally because they were part of the post-war occupation. In 1988 under President Reagan, The Atomic Veterans Compensation Act was passed despite significant opposition. Very few veterans were adequately compensated. The law was passed more than 40 years after the war, and many of the atomic veterans were dead. Their wives should be compensated.

So when you look back at your action at Oak Ridge, what are your thoughts?

I feel gratitude as we were able to do what we planned to do or hoped to do: To enter a base and inform the workers (as well as the rest of the country) of the illegality of nuclear weapons is a success. It was very difficult to get into the place, so we had to go where you wouldn't be seen.

It's a crime scene: Crimes against humanity. Crimes against international laws and treaties. That shouldn't even have to be said. The powers that be wouldn't allow us to say this in our defense. The government, including Congress, is engaged in a cover-up, which results in the limiting of media coverage, and thus the criminality is not allowed to be exposed in a court of law.

There are moral laws, ethics, and values obviously. And so, therefore, any laws that protect the production or use of nuclear weapons are invalid because a law has to be enacted to protect the common good. The Rev. Martin Luther King said a law that is not a just law is not to be obeyed. Otherwise, you're promoting the crime.

What about people in church communities?

People in various religious faith traditions recognize that it is a crime to possess nuclear weapons. Unfortunately, many ministers, bishops or others involved in religious communities are not addressing this issue. They are failing to educate their people. They will not oppose the ongoing production or the storage and possession of nuclear weapons.

… It's not taught. I've asked people if they were told in elementary school or high school as to what the bomb did. Sometimes it's taught in high school, but it's rare. It's not in the curriculum.

What do you say to people? What action do you suggest they take?

Let people take some time and look into this at each stage of their lives. Universities should be researching it and having courses about it. People need to know. It needs to be taught as historical fact and let people make their own conclusions about it: When they look what happened to people whose lives were exterminated in less than a minute and hundreds of thousands were damaged the rest of their lives. Look what's neglected in their lives and their children's lives and the $10 trillion spent.

Were you pleased with Dan Zak's book, Almighty: Courage, Resistance, and Existential Peril in the Nuclear Age?

I regret occupying so much space ... not necessary stuff. All of us were happy that he addressed the issue of nuclear weapons, the main purpose of the book. He exposed the madness of nuclear weapons. Dan has done that very conscientiously. Certain details he could have left out -- not just about myself. ... I give huge praise for the breadth of information that he gives in a very readable way ... and I'm thinking of it as a textbook of the 2015 nuclear weapons complex. ... Maybe others would be inclined to write a history book, a textbook.

There are two times he calls our actions "crimes" and he doesn't qualify these words. He doesn't say this is our shared responsibility whenever we know our government is involved in criminal activity to expose and oppose all that the government is doing against the common good.

Obuszewski: At Concepcion Picciotto's funeral, [her attorney] Mark Goldstone pointed out many thought she was crazy for protesting nuclear weapons for more than 30 years, mostly living outside the White House. Some of us, however, think that anyone contemplating the use of nuclear weapons is certifiably insane.

It shows how people were misled. We are compassionate with them because they were denied the truth in their upbringing. They are unable to recognize the immorality or even the thought of a nuclear bomb. ... Unable because of their miseducation.

This book of Dan Zak's exposes the truth very courageously and accurately. Other journalists who have exposed the truth have lost their jobs. ... A New York Times reporter, Raymond Bonner, lost his job for exposing U.S. involvement in death squad activities in Latin America.

I don't feel I've been into it that long, for 72 years. From my uncle who was at Nagasaki, that's where I got all my zest. We had to do this action. He was there for five months, nothing to do but drive around and see the absence of life. He met the bishop of Nagasaki whose cathedral had been destroyed and where his mother and sister were exterminated when the bomb was dropped. Paul Yamaguchi, they became lifelong friends. My uncle was in the Marines, and became a non-commissioned officer. In a way he also became a victim.

[Janice Sevre-Duszynska is a priest in the Association of Roman Catholic Women Priests, peace and justice activist, and a retired teacher. Max Obuszewski works with the Baltimore Nonviolence Center. ]