St. Valentine: The stuff of legend is matter of prayer in Italian town 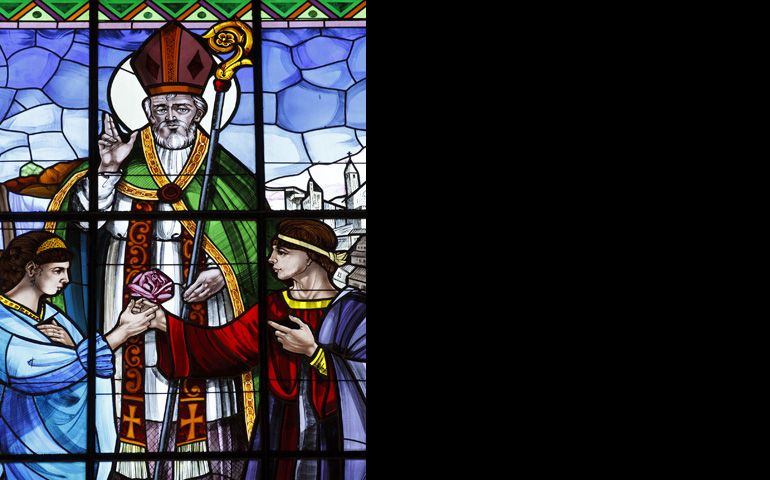 Terni, Italy — The liturgical feast of St. Valentine, removed from general church calendar in the late 1960s, continues to be celebrated with special Masses, a marathon and fireworks in Terni, which claims the saint as its former bishop.

While the Catholic church remains convinced there was a third-century martyr named Valentine, a lack of specific information and the possibility that there may have been more than one St. Valentine led to the removal of the liturgical feast from the church's general calendar.

But the feast still appears on the calendar of some local churches, particularly the diocese of Terni, Narni and Amelia in Italy's Umbria region.

The diocese says it has hard evidence that the martyred Bishop Valentine was known and venerated in Terni, about 65 miles north of Rome, as far back as the seventh century. And history books report that Pope Zachary met Liutprand, king of the Lombards, at the Basilica of St. Valentine in the mid-700s.

"The head was separated from the torso, confirming that the death was by decapitation," says the diocese's history. The relics -- not a complete body -- were kept in the diocesan cathedral for a time, but were moved to a newly constructed Basilica of St. Valentine in 1618.

The diocesan website makes it clear that the connection between St. Valentine and romantic love is the stuff of legend. In fact, there are at least three versions. One attributes to St. Valentine "the ability to protect those dating and engaged to be married and have a union gladdened by children."

The second legend says that St. Valentine, working in the garden, heard a young couple fighting and carried a rose out to them. He offered them the flower, asking both of them to hold it, but to do so tenderly because of the thorns. He then explained to them what it meant to be of "one heart."

The main stained-glass window in the basilica shows St. Valentine, wearing his bishop's miter and staff, handing a rose to a young couple dressed in ancient Roman robes.

The third story involves Serapia, a beautiful young Christian woman who lived in Terni, and Sabino, a young pagan Roman centurion. They fell in love, but Serapia's family objected to her marrying a pagan, so he went to Valentine for instruction to be baptized. Serapia got sick in the meantime and, as she lay dying, Sabino asked Valentine not to allow them to be separated. "A blessed sleep" fell over Sabino and the two were "united for eternity."

Emiliano Buccetti, vice president of the St. Valentine Cultural Association in Terni, told Catholic News Service in 2013: "It's great that he is celebrated with chocolates, but the Feb. 14 feast is more than that -- it marks the martyrdom of our bishop; it is the feast of a Christian who gave his life for others."

The people of Terni, he said, "emphasize the feast of a saint and not just the occasion to exchanges kisses."

St. Valentine: The stuff of legend is matter of prayer in Italian town

In Pakistan, valentines are exchanged in secret