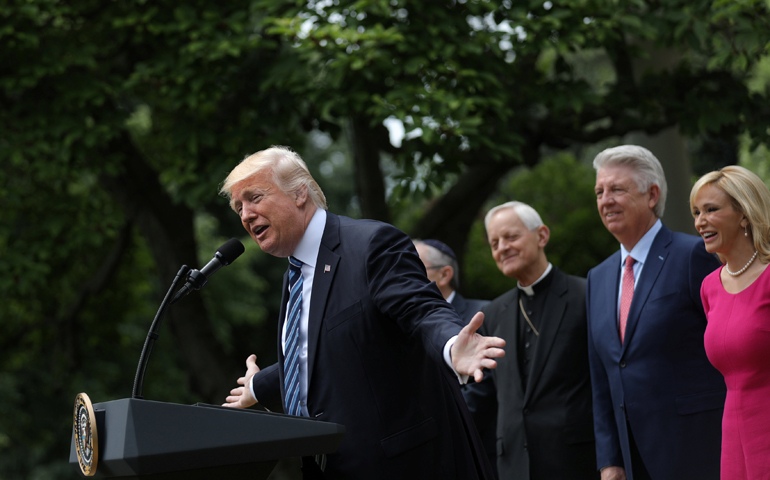 President Donald Trump speaks during a National Day of Prayer event at the White House in Washington May 4 as he signed an executive order on religious liberty. (CNS/Carlos Barria, Reuters)

In a few days, President Trump is scheduled to travel to the Near East and then Europe for a NATO leaders' meeting, and a meeting of G7 industrial nations in Italy. His itinerary includes a visit with Pope Francis at the Vatican on May 24. A few weeks back when such a meeting was a mere rumor, I wrote a blog with ideas for Pope Francis to address in such a meeting: everything from the environmental message of Laudato Si' to a "heart to heart" about the dangers of colluding with Russia.

But meanwhile, a major scandal has erupted at the White House with the firing of James Comey as FBI director. Most political analysts see this firing as a direct response to the FBI's ongoing investigation of Russian meddling in the 2016 U.S. presidential election in an effort to help Trump. At least that is the most plausible explanation.  I (and many other analysts) believe that Trump is fearful that the FBI investigation has uncovered facts related to his campaign's collusion with the Russians in order to win the election. Simply put: such revelations — if they are true and become public — would end his presidency.

But that is speculation at this point. So, I have some new suggestions for Pope Francis as he meets with a very troubled Trump.

First of all, Francis will be dealing with a man who is probably not psychologically stable, and so a pastoral approach — not preaching — would be most effective. Assuming they have time to do more than niceties, Francis might empathize with the situation of being a new leader and talk a bit about his own feelings and experience upon assuming the papacy, with its global responsibilities and expectations. As part of that, Francis might emphasize the importance of truth telling by leaders of any kind, something for which Trump is not known.

Since Francis will be talking to a man who understands little about government or about the world at large, Francis might establish some rapport by saying that he had to "learn a lot" after he assumed the papacy … and encourage Trump to "learn on the job" as he did. (I'm sure Pope Francis knows much more about the realities of the world than Trump does, but such a tone might encourage Trump to learn what he does not know.)

As an example, Pope Francis might emphasize that he had to learn a lot about environmental science in order to issue the encyclical Laudato Si. He could give Trump a copy of it, and encourage Trump to learn about our planetary reality, and thus not pull the United States out of the Paris climate accords.

Francis might also raise his concerns about the issue of North Korea and emphasize the mortal dangers involved in using nuclear weapons. He can note that Catholic teaching on this question is unequivocal, and acknowledge that Trump's own Presbyterian Church (U.S.A.) in 2003, at its 215th General Assembly, called for "the abolition of nuclear weapons."

Finally, Pope Francis might reiterate his famous quotation about Trump's proposed wall on our southern border: "It is better to build bridges than walls."  And that refers to more than the U.S. and Mexico. Thus, he could say, "We should stay in touch."

I'm sure this visit will be brief. But even in a short time, anything Francis can do to bring Trump to face the realities of the world would be a gift to the entire planet.