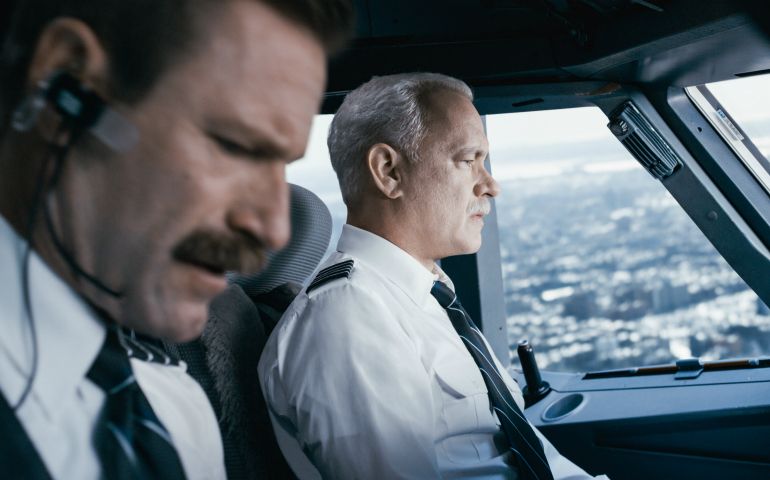 Arron Eckhart and Tom Hanks star in a scene from the movie "Sully." (CNS photo/Warner Bros.)

Everyone knows the story of US Airways Flight 1549. On Jan. 15, 2009, Captain Sully "Sullenberger" (played in "Sully" by Tom Hanks) and his co-pilot Jeff Skiles (Aaron Eckhart) took off from La Guardia airport in a plane with 155 people on board, passengers and crew. They collided with a flock of Canadian geese just a couple of minutes later. They were over Manhattan and radioed they were returning left, back to La Guardia. In 207 seconds, with both engines out, Sully and Skiles brought the plane down in a water landing on the Hudson River.

The story seems straightforward, and it is. Director Clint Eastwood has intuited that the power of the story of a man's character over that of an airplane crash might make a better movie, and for my money, it does. But put them together and you get a hero's story of epic proportions.

Screenwriter Todd Komarnicki's ("Perfect Stranger," "Elf") based his script on Sullenberger's 2009 memoir Highest Duty: My Search for What Really Matters. Because the script is unadorned and unembellished, the story practically tells itself.

The adversary in the film is not the birds, the plane, or pesky passengers. It turns out to be the National Transportation Safety Board (NTSB) and other initial-laden officials and committees (nobody likes them very much) that question the pilots' professional ability and by extension, their integrity. The courtroom drama, a huge hearing room scene, is perfectly rendered. After almost 40 years as a pilot, Sully knows what happened.

"Sully" proves true the maxim that less is more, and Eastwood delivers again on his theme of the male hero. That's not a complaint, it's just that stories like this are straight out of Eastwood's wheelhouse.

The one thing the audience gets a lot of, however, is the plane landing or "water ditching" itself. The computer simulations of the crash at the hearings and Sully's nightmare that opens the film, add to the tension, but it's not over done. We want vindication for our heroes and we will wait for it.

When I posted on Facebook that I had seen the film at a press screening, one of my friends replied that the Skiles are in her parish and she had just been to a liturgy meeting with Jeff's wife a week before. Small world.

I was moved to tears a few times when watching the film at the sheer goodness of people. New York's and New Jersey's finest went to the aid of the fallen plane immediately. Within 24 minutes, all 155 people were rescued.

"Sully" is a film that inspires because it is perfectly played and is about as true as it gets for being a narrative film rather than a documentary. The iconic image of the passengers standing on the wings of the plane waiting to be rescued and knowing they will be renews your faith in humanity.

When Tom Hanks gave up being the captain of a ship ("Captain Phillips") to captain a plane, he made a wise career change. Eckhart compliments Hank's performance; it's almost a tug-of-war over who can be more humble or the nicest guy in the room.

To be a person of character means to do the right thing even when no one is looking. The pilots and crew of Flight 1549 did their jobs without hesitation; the first responders did their jobs and the ferryboat captains reacted immediately to rescue passengers who, by the way, did pretty well considering they'd survived a water landing instead of a plane crash.