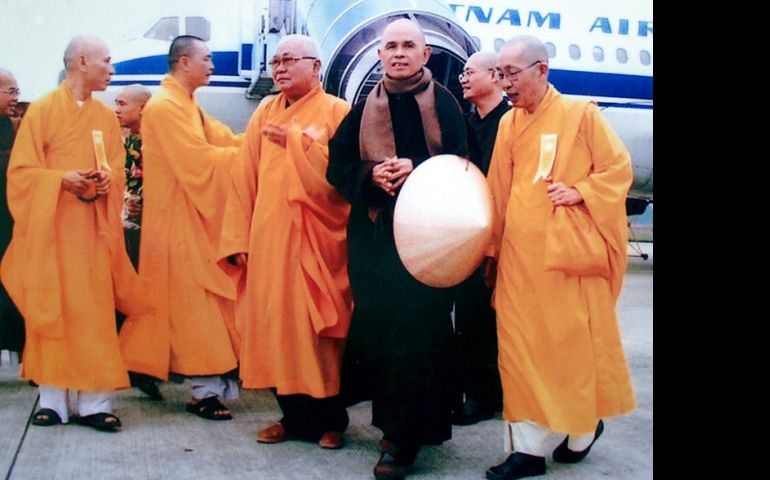 The 88-year-old spiritual leader was taken ill Nov. 1 and moved from his Plum Village monastery to a hospital in Bordeaux, France. The stroke occurred Nov. 11th while he was in the hospital.

His blood pressure and pulse are stable and he is still breathing on his own, according to the statement. “However, in recent days Thay [a Vietnamese term of respect] has been sleeping more deeply and communicating less.”

“The monks and nuns attend our teacher continuously at his bedside, breathing with him, embracing him with their love, praying that the millions of healthy cells in Thay’s body may become millions of bodhisattvas, helping his brain to heal. As Thay’s condition remains critical, please intensify your practice of generating the energy of Great Compassion of Avalokita for Thay.

“Let us support Thay by sustaining our practice of mindfulness throughout the day, wherever we are, keeping Thay alive within us and within our community. With deep conscious breaths and mindful steps, let us allow Thay’s teachings to ripen within us, helping us see Thay’s continuation body and Thay’s sangha body.

May we let go of resentments against those who have hurt us, and release our fear and sorrow, by coming back to the calm and gentle breathing that Thay has transmitted to us. This is the best way we can support Thay and be his beautiful continuation.”

Nhat Hanh has been a popular peace advocate whose work dates back to the mid-1960s when he was exiled from Vietnam during the war and settled in France where he has lived and preached since.  The Zen Buddhist monk has done much to popularize Buddhist thought in the west, traveling regularly through North America and Europe.

In one of Nhat Hanh's many books, Living Buddha/Living Christ, he describes similarities between the life and teachings of Buddha and Jesus. Both Buddha and Jesus, Nhat Hanh says, were contemplatives, both were wisdom teachers who had transformative experiences in their early 30s, both began renewal movements in their own traditions, and both taught ways to respond creatively to life's conditions.

Nhat Hanh taught a meditation technique called mindfulness through which practitioners avoid distraction by becoming more aware of the present moment, and more calmly engaged in the world.

Nhat Hanh compares Buddhists who practice mindfulness to Christians who yearn to embody the Holy Spirit, which, they believe, is God's healing presence.

No matter what the clock says