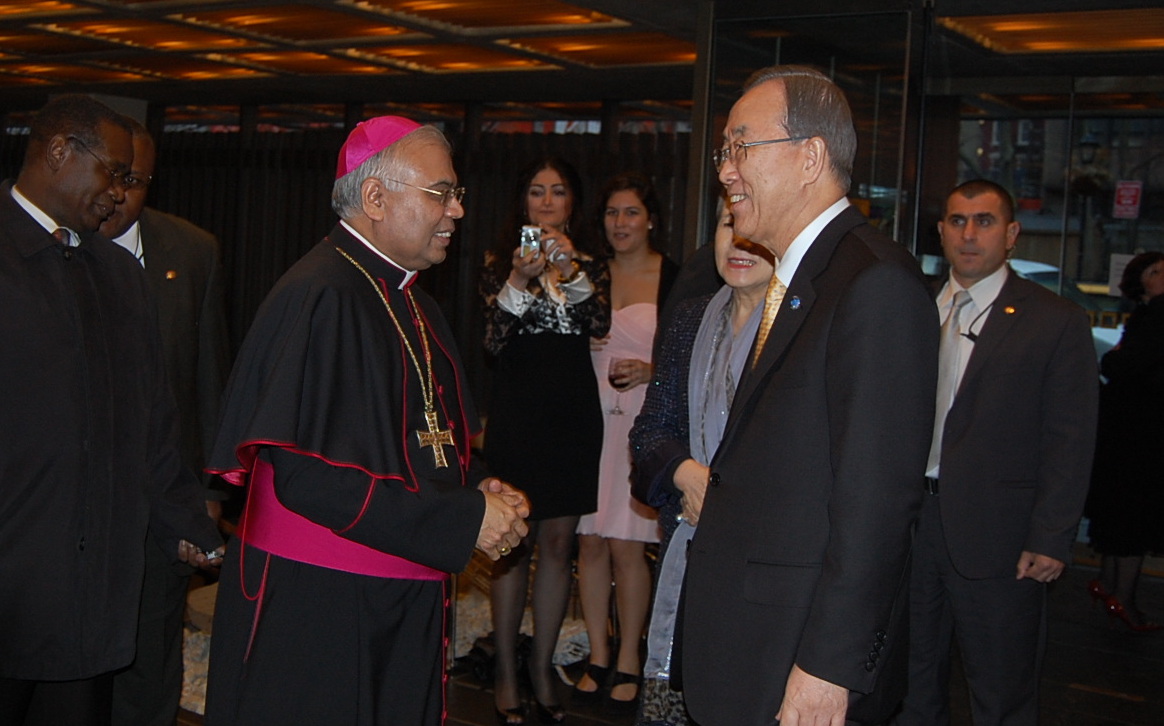 The event was organized and hosted by Archbishop Francis A. Chullikatt, Apostolic Nuncio, Permanent Observer of the Holy See to the United Nations, and held at the Japan Society in midtown Manhattan, to celebrate the inauguration of the pontificate of Pope Francis.

In his opening remarks Chullikatt, in his usual good humor, recalled that prior to the election of the pope, he assured many about who would be the next pope. “I was very straight with them, very sincere, I said ‘I am not the one.’”

Chullikatt highlighted the very first words of the new pope to the awaiting crowd in St. Peter’s Square.  “He said in Italian, ‘fratelli e sorelle buona sera’ and in English,

‘Brothers and sisters, good evening.’  It is something that a pope has never said soon after his election, it was something unique,” said Chullikatt.

“If you remember Pope John Paul II when he addressed the people for the first time, he said ‘Jesus Christ be praised.  Praise be Jesus Christ.’  Here we have this new pope immediately connecting with the people, the hundreds of thousands of people in St. Peter’s Square greeting them in the usual manner every time we meet,” said Chullikatt.

“There was a warmth and gentleness that immediately drew people to him and made people smile back with warmth and affection,” said Chullikatt.  “Many people quickly reminisced and evoked the beautiful memories of by-gone days of Pope John XXIII and Popes John Paul the first and the second,” said Chullikatt.

“Everything Pope Francis has done since his then has added to that initial impression of a warm, gentle, endearing, and indeed, a humble man.  He is a person with profound spirituality, a deep awareness of God and at the same time a genuine neighborliness to people.  A love of God united to a love of people.  Just as it should be.  Just as Jesus taught us,” said Chullikatt.

“Whether dealing with a huge crowd, a small group or an individual person, Pope Francis seems to know instinctively what to do and what to say.  Our daily Vatican news briefings have phrases in them that we have never seen before.”

“All of us look forward to the pope’s ministry and we pray that God will bless him, protect him and strengthen him for years to come,” said Chullikatt.

In introducing Ki-Moon, Chullikatt pointed out that Ki-Moon has already met the pope this past Tuesday morning at the Vatican.  Ki-Moon then offered his impressions of Pope Francis.

“It is a profound honor to join you this evening and a special privilege to do so soon after my visit to the Vatican and meeting with His Holiness Pope Francis,” said Ki-Moon.

Ki-Moon’s initial remarks reflected the warm and close relationship he has with Chullikatt.

“I deeply appreciated the opportunity to have an audience with Pope Francis so early in his tenure.  And I would like to express my sincere thanks to Archbishop Francis Assisi Chullikatt for his arranging my audience with Pope Francis.  He [Chullikatt] talked about the selection process of pope and coming to here and looking at his name and it just came to my mind.   I don’t if it is proper for me to make this certain comparison with his name with the Pope’s name.  The Pope’s name is Pope Francis Assisi.  His name begins with ‘Francis Assisi Chullikatt’ and he has the two common names with the pope.  So he has a good chance.  So congratulations.”

“I can tell you that after meeting His Holiness, I came away with a deep, abiding respect for his moral voice and his passionate commitment and his deep humility.  I told His Holiness that his choice of name after St. Francis of Assisi was a powerful message.  It speaks loudly of his commitment to the poor and his resolve to improve the human condition.  I was especially privileged to meet Pope Francis as we marked 1,000 days to the deadline for the Millennium Development Goals.  We discussed a need to advance social justice and accelerate the world to meet MDGs and the Sustainable Development Goals.  We also talked about the need for all of us and the world to advance the dignity and human rights, especially for women and girls.  Pope Francis is a bridge builder.  I know that he strongly shares my conviction that inter-faith dialogue can point the way for a deeper appreciation for shared values, which in turn can lead to tolerance, inclusion and peace.  This is what guides us, our United Nations Alliance of Civilization initiative.  And I greatly the opportunity to speak to Pope Francis about how to further promote the essential work of the Alliance of Civilization.

The pope’s response was very positive, but Ki-Moon clarified his invitation.

“I was not pressing you to visit tomorrow or next month but am just giving you my invitation as I gave to your predecessor and just pick any time at your earliest convenience. I’m excited to work with him to build a more fair, just world.”

“I told His Holiness that this world is full of crises.  So many problems.  Regional conflicts, global challenges, climate change, human rights violations, so we need your spiritual inspiration, spiritual guidance.  With that we can solve these problems.”

Ki-Moon and Chullikat then offered a toast in honor of Pope Francis.

[Tom Gallagher writes NCR's Mission Management column. He recently joined NCR's board of directors and is a volunteer for the Path To Peace Foundation that supports the work of the Holy See Mission.  His email address is tom@tomgallagheronline.com.]