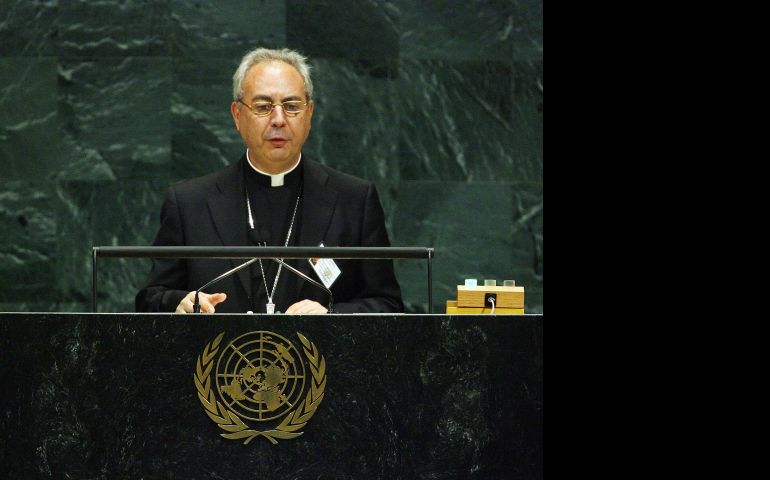 A Vatican official challenged the sincerity of U.S. and other major nuclear power disarmament efforts Friday at a meeting of the United Nation’s General Assembly.

Archbishop Dominique Mamberti, Vatican's Secretary for Relations with States, spoke of the perceived hollowness of disarmament commitments by nations who continue to upgrade the nuclear weapons programs, Vatican radio reported.

“Under the terms of the [1970] Non-Proliferation Treaty, states are enjoined to make ‘good faith’ efforts to negotiate the elimination of nuclear weapons,” Mamberti reminded delegates, “Can we say there is ‘good faith’ when modernization programs of the nuclear weapons states continue despite their affirmations of eventual nuclear disarmament?”

The doctrine of nuclear deterrence adopted by states with nuclear weapons is not working, Mamberti said. “For many years, the world has been told that a number of steps will lead eventually to nuclear disarmament. Such argumentation is belied by the extraordinary nature of today’s meeting, which surely would not have been called if the steps were working. They are not.”

“We cannot justify the continuation of a permanent nuclear deterrence policy,” he went on, “given the loss of human, financial and material resources in time of scarcity of funds for health, education and social services around the world and in the face of current threats to human security, such as poverty, climate change, terrorism and transnational crimes.

All this should make us consider the ethical dimension and the moral legitimacy of the production, processing, development, accumulation, use and threat of use of nuclear arms.”

Mamberti said that military doctrines based on nuclear arms “as instruments of security and defense of an élite group, in a show of power and supremacy, retard and jeopardize the process of nuclear disarmament and non-proliferation.”

The United States military maintains a nuclear arsenal of some 1,700 deployed strategic nuclear warheads, according to an April 2012 report under the New START treaty. These warheads are deployed on Intercontinental Ballistic Missiles, Submarine-Launched Ballistic Missiles, and Strategic Bombers.

The Departments of Defense and Energy currently spend approximately $31 billion per year to maintain and upgrade these systems, according to the non-profit and non-partisan Arms Control Association

U.S. nuclear delivery systems are undergoing continual modernization, including rebuilds of the Minuteman III ICBM and Trident II SLBM. The B-2 strategic bomber, a relatively new system, is being upgraded, as is the B-52H bomber. The Air Force is also planning a new long-range penetrating bomber and a new cruise missile to replace the air-launched Cruise missiles.

Meanwhile, the U.S. stockpile of nuclear warheads and bombs is continually refurbished and nuclear weapons production complexes are being modernized.

U.S. nuclear modernization programs are expected to cost some $80 billion in the next 10 years.

Francis will be 'boon' to ecumenism, expert predicts

The Irony of Grace: When Hollywood Mourn

A journey to the roots of Francis' papacy