When will President Trump criticize Russia? 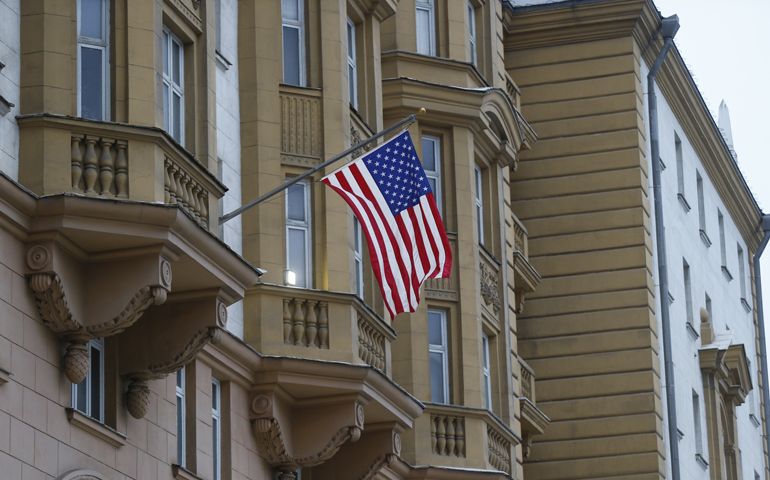 Several links cited below illustrate some of Russia's current actions that should be disturbing to every American. Yet any links indicating President Trump's criticism of these Russian activities are not anywhere to be found.

Let's take a quick look at what is going on in our world right now. Russia has taken a dominant role in the Syrian conflict. Together with China they voted no on a United Nations resolution to impose sanctions on anyone using chemical weapons in the Syrian conflict. They have engaged in heavy bombardment. They have killed a minimum of 2,704 civilians, including 746 children. They have not been targeting Islamic State forces, but instead have propped up the government of Bashar Assad. They control any possible peace process and have essentially left the United States sitting on the sideline. Russia now has its first permanent air base in the Middle East in Syria.

It could be argued that President Obama's actions or inactions are at least partially responsible for this state of affairs. But that has no real meaning in the discussion now. What is our current president doing or saying about the present state of affairs? The only response I have heard from Trump is that we should coordinate with Russia in attacking ISIS in Syria.

Russia's actions in Ukraine are equally disconcerting. Troops favoring Russia are actively engaged in warfare against the government of Ukraine. They are taking over factories and mines. They have instituted a blockade which has disrupted trade and prevented the government from receiving necessary shipments of coal.

The Russians have begun recognizing passports and other documents issued by the rebels. Clearly they are acting aggressively to undermine NATO and prevent any further expansion.

Additionally, Russia is acting electronically and in other ways to interfere in European elections to elect candidates favorable to their expansionist vision. Fake and misleading news abound. There are growing attempts to influence the September German elections. The Russians are attempting to undermine British sovereignty through propaganda, fake news and other subversive acts. The Russians seek to erode support for the European Union and NATO. They want to damage public trust and confidence in democracy itself.

Russia was instrumental last year in the rejection of a treaty with Ukraine by the Dutch. They influenced the outcome of the Brexit referendum. In December Italian Prime Minister Matteo Renzi was forced to resign when the Italian people rejected his constitutional reforms.

Russian disinformation is dangerous to the very foundations of liberal democracy. Europe is concerned and is doing everything they know to do to prevent further influence and disruption. What is the response of the Trump administration to all these activities? An unnerving silence.

Can one even conceive of a president of the United States not responding to these challenges from a formidable adversary? When will the Republican Congress raise its voice against these incursions into the fate of Western democracies? Republicans have long stood as a bulwark against Russia and China. Have they been drinking the Kool-Aid at the White House?

There are serious activities going on in our world right now, and one important voice is stunningly silent. How long can this continue without serious damage being done to our place in the world, and to our way of life?