Who will take home the Oscars this year? 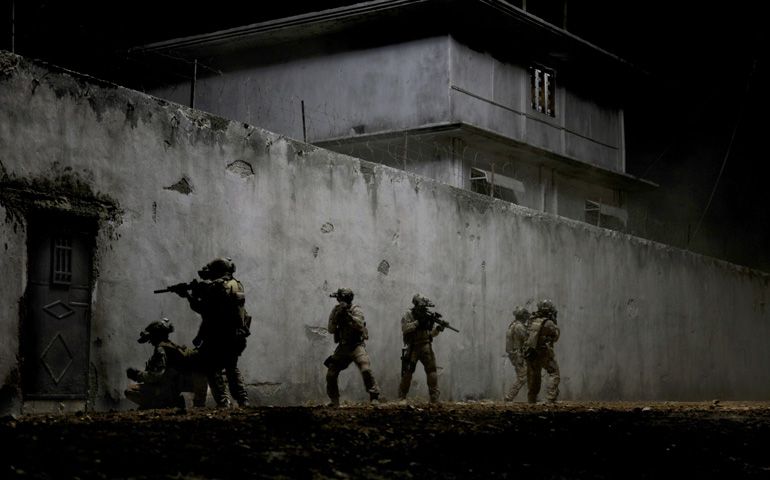 U.S. Navy SEALs are portrayed in a scene from the movie "Zero Dark Thirty." (CNS/Sony)

2012 was an excellent year for cinema. However, three films about aging that I liked were not even nominated, such as Dustin Hoffman's "Quartet," Jake Schreier's "Robot & Frank" or John Madden's "Best Exotic Marigold Hotel." Instead, Michael Haneke's accomplished and artistic yet bleak French-language film "Amour," about an aging couple in Paris, received four nominations. Please note that Dame Maggie Smith appears in both "Quartet" and "Best Exotic Marigold Hotel," which makes home viewing a must.

But with the news that Pope Benedict XVI will resign four days after the Academy Awards, which are Sunday, I have to wonder how many people besides me will care about the Oscars this year. Added to the pope's story taking up considerable media ink, virtual and otherwise, the 2013 Los Angeles Religious Education Congress will conclude Sunday, too, and I hope I get home on time to see the Oscar show.

Because of the RECongress we had to give up holding our annual Oscar potluck party (which we were happy to do!). The winner of our "Guess the Winner" contest would be, again, the one who has not even seen any of the films, but it's a lot of fun. The prizes are gift cards to Blockbuster, and since no one knows from one minute to the next if the company will dissolve overnight or evolve into something else, winning is a rather questionable achievement. One good thing is that there's always the DVR, making it possible to record the show and to skip over the stunning superficiality of the red carpet gauntlet and get right to what Academy members (or whomever actually votes) think should win the Oscars.

If you look at the full roster of films nominated (click here for a ballot or a printable version), there are stories with many themes, including racism, poverty, family, aging, revenge, war, terrorism, mercy, hope, religion, spirituality, heroism, politics, mental illness, history, climate change, fairy tales, music, society, power and, of course, art and escapism.

I already considered the nine films nominated in the best picture category, but here are some comments on other films as well.

"The Master": This story is thought to be loosely based on the life of L. Ron Hubbard, founder of Scientology. Some have called best supporting actor nominee Philip Seymour Hoffman's charismatic performance a master class in acting. I agree. Joaquin Phoenix as the alcoholic veteran seeking some kind of meaning is nominated in the best actor category. He's good, but if he wins, it will be because the Academy wants to make up for not awarding him for his role as Johnny Cash in "Walk the Line." Amy Adams plays the master's wife, and she, too, is nominated in a supporting role, but there is no one character to like in Paul Thomas Anderson's quasi-biopic. If anything, it's a fairly good examination of how a cult is formed.

"Flight": Denzel Washington is nominated in the best actor category and John Gatins for original screenplay in this story about Whip Whitaker, a high-functioning alcoholic who lands a malfunctioning jet with minimal loss of life and injuries. There is a real spiritual and religious dimension to the story, as uneven as it is. Washington is always good and in this role gives hope to anyone who struggles with pride and addiction.

"The Impossible": Naomi Watts is nominated in the best actress category for playing Maria, a wife and mother who with one of her sons survives the 2004 Indian Ocean tsunami and against all odds reunites with the rest of the family. This is an incredible true story, but the real noteworthy performance here is by Tom Holland, who plays the eldest son. There are many human and Gospel values in "The Impossible," and though it has a B.K. rating (bring Kleenex), it avoids sentimentality and exudes strength, courage and empathy.

I reviewed "Brave" earlier this year in NCR, and though it may look good, the story is poorly crafted and the main character unlikable. In "Wreck-It Ralph," the main character (voice of John C. Reilly) has a sweetness about him and his plight is sympathetic, but the way the film socializes little girls into military video gaming with a highly stylized female soldier with weapons and tanks is deeply troubling. "The Pirates! Band of Misfits" to me was just another pirate movie. (Enough already.) "Frankenweenie" is one of my favorites and is for any boy who has ever lost a beloved dog, any child a beloved pet. "ParaNorman" may be the most interesting of all the animated features. It is about being different and bullying, but most of all it is like a reincarnation of "The Crucible" about the Salem witch burnings. This sounds very dark, true, but the film asks yet one more time: "Can't we all just get along?" Must we persecute people who are different? (And I am sorry that "Rise of the Guardians" was not nominated; it deserved to be.)

"Anna Karenina": Nominated for production design, it certainly merits the honor. The film, which has a distinct Baz Luhrmann quality about it reminiscent of "Moulin Rouge," almost entirely takes place on a 19th-century theater stage. As for the story, I am not sure why the decision was made to remake for the 27th time Tolstoy's tale of a woman caught in adultery. There is enough regret to go around for all; even the injured husband is left alone in his self-righteousness.

"Skyfall": Best original song "Skyfall" by Adele is quite excellent for the one film when 007 almost gets religion. Read my review here.

"Chasing Ice": The theme "Before My Time" by J. Ralph is a rich soundtrack for a film about the serious situation of glaciers dying all over the planet. I think the film deserved a nomination for best documentary and could have won it. Here's my review.

"The Hobbit: An Unexpected Journey": Nominated for three Academy Awards in visual effects, production design and make-up, I think it is more than generous to an over-long film that in 48 frames per second 3-D really pushed style over substance, though I liked the story. Read my review here.

"5 Broken Cameras": A Palestinian man begins to document his life the day his youngest son is born. See my review here. This is very deserving of the Oscar because it shows Palestinians and Jews can put differences aside to work together, to get along, to resolve problems, to make peace.

"The Gatekeepers": The filmmakers interview the surviving heads of Shin Bet, the Israeli security agency. These men admit that morals and ethics do not apply, that they employ strategies to protect Israel but have no plan for peace. But by the end of the film, at least three of these former security people realize Israel must do something different because even among their own Jewish citizens, there are deep divisions. Do you know what I got out of this film? There is hope for peace between Israelis and Palestinians. But this footage is very harrowing at times to watch.

"Searching for Sugarman": I loved this gentle movie about a singer whose mythic status inspired South Africans to end apartheid. One they thought was dead was alive, and now in his 70s, his music is being heard anew. See my review here.

"A Royal Affair": Nominated in the best foreign language category, this film tells a true story few of us know about: the complicated role a British princess played in the Danish royal family to bring about justice when she married the crown prince.

"No": Also nominated in the best foreign language category, "No" is based on the true story of a young ad executive who designs a clever campaign when General Augusto Pinochet, dictator president of Chile, is pressured to call for an election to keep him in office for another eight years. Voters are to simply mark "yes" or "no" on the ballot. Political parties are again allowed, and for 28 days, those in support of "yes" and those in support of "no" can have 15 minutes of television time in the middle of the night to press their cause. Gael Garcia Bernal plays marketing whiz René Saavedra, who pushes happiness over making a case for torture, murder, and hundreds who disappeared under Pinochet's reign. This is a brilliant film about marketing, the occasional clash between facts and truth, and who the message is for: the satisfaction of those telling the story or the audience. Very deserving film.

"Moonrise Kingdom": The film, written by Roman Coppola and Wes Anderson, is nominated in the best original screenplay category. I reviewed it with other summer films. If you grew up in the 1960s, you get it. Charming in a very quirky way.

"Head Over Heels": This animated parable about marriage is short and charming, and if it is ever on DVD, be sure to see it. The husband lives and walks on the ground floor of the house and the wife on the ceiling, yet both seem to be living normally, their perspectives never meeting. How did they get that way? Will they ever see eye-to-eye again? Will they ever dance together again? Wonderful. See the trailer here.

"Buzkashi Boys": The short is a live-action story about two boys in Kabul. At first I thought it was going to be a mini-version of "The Kite Runner," but it is very different. What amazed me is the extremely beautiful and haunting cinematography of such a short film about the hopes for boys in a war-torn place. See the trailer here.

Here's how I'd vote if I were a member of the Academy of Motion Picture Arts and Sciences, and these are not easy choices.

Culture | Who will take home the Oscars this year?

Following Chaput into the political fray

The media's part in a culture of guns