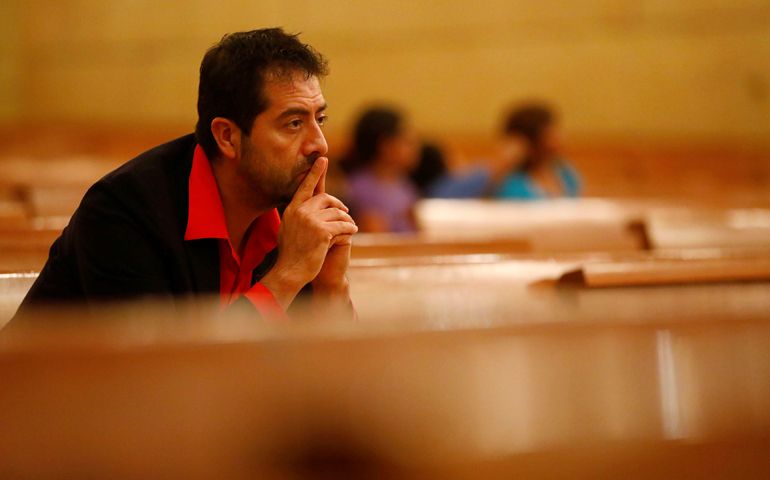 Ernesto Vega of the Los Angeles archdiocese Hispanic ministry, listens at an interfaith prayer service for the immigrant community Nov. 10 at the Cathedral of Our Lady of the Angels in Los Angeles. (CNS/Patrick T. Fallon, Reuters)

One evening in late September at a branch of the Kansas City Public Library, I spoke to a crowd of more than 400 people who had come to hear about my new book, The Value of Doubt: Why Unanswered Questions, Not Unquestioned Answers, Build Faith.

One of the questions an audience member asked was, essentially, this: You've spoken about how doubt helps with faith formation, but what can you say about your faith that you believe without doubt?

It's the kind of question a good journalist might ask. I don't have perfect recall of my answer to the man, but it was something like this: I don't doubt that the impulse behind creation was love and that the loving creator also loves me without condition. And yet, I said (again, paraphrasing myself), despite my certainty about that, I need to leave myself open to new ways of understanding the depth and beauty of that love.

Well, soon after the book-launch event, a friend from my Presbyterian congregation who had attended it sent me a note saying she was challenged by the man's question and afterward drafted a statement about what she believed with certainty — or at least as much certainty as possible.

She listed three points that corresponded to the Holy Trinity. Her points of belief, as she worded them, would inevitably be slightly different from anyone else's because they were in her words. I admired her way of putting things, but that way was hers, not mine.

Among our certainties we should not simply repeat the Apostles' or Nicene Creeds, for instance. That would be lazy and mostly fruitless. Nor should Catholics simply pluck some words from this or that pope's books or encyclicals, just as Presbyterians should not plagiarize resolutions about one subject or another adopted by our highest ruling body, the General Assembly.

Those words can be guides, but if we are to own the faith in a profoundly personal way — while recognizing that we are part of a covenant community — we must put our doubts, questions and certainties into our own words.

Some years ago when I served on a committee that oversaw seminary students from our area, we required each of them to draft a new statement of faith every year. The goal was to see what changes were occurring in the students and where the edge of growth was for them.

I remember one man whose annual statements changed hardly at all and revealed that he didn't grasp the difference between being a minister of the word and sacrament and being, by contrast, a social worker or peace advocate.

Eventually we parted ways without approving him for ordination and he went to a different denomination. Without the challenge we had given him to put down his theology in writing we might have missed what we considered a serious deficiency in his preparation to be a pastor.

By proposing this write-down-your-faith exercise, I don't mean to suggest that it is all just about the writer. Rather, my hope is that the task will require community conversation, reading, praying and thinking theologically.

That's what a faith community is for. It provides the banks of the river in which all of our theological thinking flows so we can avoid running into theologically anarchistic streets with wild conclusions that run counter to the core of Christianity.

So write down your doubts, questions and certainties. But then make sure you share them inside your faith community. Listen to the questions others ask you. And then be willing to recognize this: You might be wrong.

[Bill Tammeus, a Presbyterian elder and former award-winning Faith columnist for The Kansas City Star, writes the daily "Faith Matters" blog for The Star's website and a column for The Presbyterian Outlook. His latest book is The Value of Doubt: Why Unanswered Questions, Not Unquestioned Answers, Build Faith. E-mail him at wtammeus@gmail.com.]

Spirituality | Write down doubts and certainties to live an examined faith