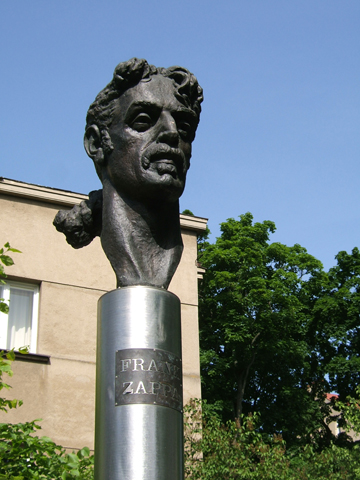 I was having a conversation with a fellow friar, Br. Anthony, this weekend about the recent death of Gail Zappa, the widow of musician Frank Zappa (1940-1993). While proud of his lack of mainstream popularity, Frank Zappa's output was incredible. In his lifetime, Zappa produced 62 albums, and Gail released another 38 albums posthumously for an even 100. In addition to his reputation as a prolific composer, Zappa was a high-profile critic of censorship and what would come to be known as downloading or streaming music. After Frank's death, Gail took up the fight for musicians to control how their creations and images are used well before the advent of iTunes, Spotify, or the internet.

The beauty of Franciscan spirituality is the confidence that if you dig deeply and truly, you will eventually encounter a connection to the Lord. As we discussed Zappa's musical legacy, Br. Anthony mentioned some lyrics from the song "You Are What You Is."

Do you know what you are

You are what you is

You is what you am

You ain't what you not

So see what you got

You are what you is

And that's all it is

Zappa's grammatically creative lyrics don't seem so far from Thomas Merton's thoughts on personal sanctity. Merton wrote, "For me to be a saint means to be myself, therefore the problem of sanctity and salvation is in fact the problem of finding out who I am and discovering my true self."

In both our Scripture and our saints, we see God's penchant for using improbable characters as mouthpieces. Having been an atheist, Frank Zappa is an unlikely conversation partner for Merton (Somehow, I can't picture Merton, a Trappist monk, listening to Zappa's "Don't Eat the Yellow Snow"). Both Merton and Zappa, however, seem to share something in common in their statements on integrity of the human person. Zappa, however, was more interested in exploring the boundaries of recorded music than his personal spirituality. On the other hand, Merton continued to discover who-he-was in an ongoing reflection that led him into both deep personal prayer and universal dialogue with other faiths.

Becoming who we are is an ongoing task that requires a tremendous amount of interior work. Our personal archeology will lead us into new caves with both jewels and darkness. In our own depths, we hear the Lord's revelation of "I-Who-Am," God's own grammatically creative Word of self-disclosure to Moses. The mutual revelation of who-God-is and who-we-are is the stuff of life and vocation. If we go deep enough, we will certainly find harmonies and melodies that connect us to both the Lord and each other.