US has a fear crisis, not an immigration crisis 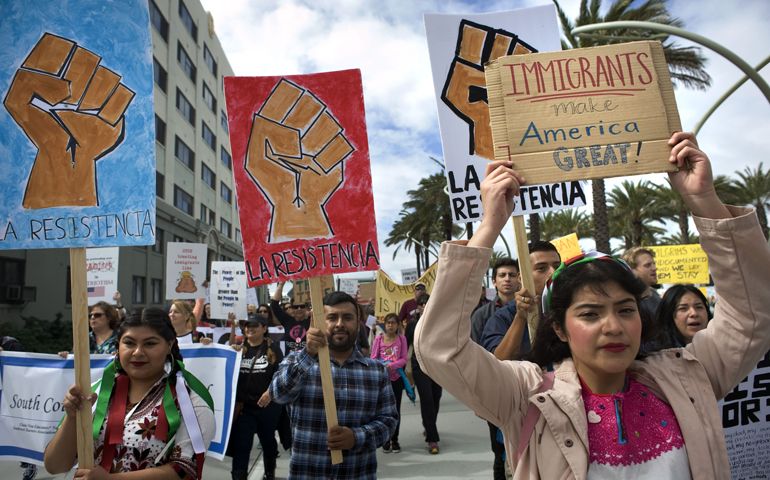 When did we get to be so mean?

Like every pastor who tries to lead a diverse community, I have become increasingly aware of the tensions and division in my own parish over immigration. There are some who feel that the current political climate has given them permission to reject the migrants among us. There are also the migrants, who have been part of our community for many years, and are now living with considerable fear and anxiety.

Pope Francis says, "A church without charity does not exist." But some people seem to think that charity should begin and end at home.

In my middle-class, largely white parish, on the periphery of the Washington, D.C., area, there is a new "hostility" to immigrants, even though these migrants have been here for years.

We have had a Spanish language Mass for more than 19 years. When it began, it was well attended because we had a large group of seasonal workers. Those workers came here on H-2B seasonal workers' visas to pick the crabmeat out of the crabs caught in the nearby Chesapeake Bay and its tributaries. Usually they stayed here for six months, living in communal housing.

But the factory suddenly closed about 17 years ago. The immediate cause of the closure was tax theft and tax evasion. Evidently the factory manager was collecting the withheld taxes as he should, but not sending them into the IRS. In effect he was stealing from both the government and his workers. He figured that these migrant workers would not file their tax returns. But one year our parish helped them file their tax returns, and he got caught.

The factory closed on the feast of Our Lady of Guadalupe in 2001. The workers, largely from Hidalgo, in central Mexico, were in tears. Most went home immediately. But a few stayed in the area and got jobs elsewhere. They are the classic "visa overstays." They became illegal when their visas expired.

Visa overstays are the real source of most illegal immigration. According to the Center for Migration Studies, run by the Congregation of the Missionaries of St. Charles, "overstays have exceeded EWIs [entries without inspection] every year since 2007, and 600,000 more overstays than EWIs have arrived since 2007." They did not swim a river or climb a fence. Trump's wall would do nothing to deter them.

But our visa overstays have been here a long time. In our community they have been here nearly two decades. Their children were born here and have gone through our public schools. They play on our sports teams and join our scout troops. They come to our churches and are in our confirmation and first Communion classes.

Now these families are in considerable fear that they will be separated. Children are anxious that their parents will be deported. Parents are afraid that they might not be with their children.

One lady, who runs a thriving business in our community, told me that she goes only between her house and her business. She does not go to stores or parks. She is afraid she might get picked up and leave her 5-year-old without a mother. She listens to Spanish language broadcasts for news of the latest Immigration and Customs Enforcement raids. She now lives in fear in a place where she has lived in peace for a long time.

Some of my native-born parishioners say, "Good. They should be in fear. They are illegal. Let them leave." Really?

We wanted and used their cheap labor for years. But now we want them out.

I think that in our heart of hearts we all know that if we had been in the position of these illegal immigrants, we would have done what they did.

On our mission trips to Mexico and Central America, we have seen people living in shacks made of mud and sticks. We have seen people who are hungry. They are people just like you and me. They want what we want, to feed their families and to live in peace. These are the workers that came here on temporary visas and stayed on to support their poor families back home and to raise their children here.

"Consider this," I have said to parishioners, "If your family was hungry or homeless or in danger, wouldn't you do the same thing? Wouldn't you swim any river and climb any fence to save your family? I know that I would."

We don't have an immigration crisis. What we have is a crisis of groundless fear and a lack of charity.

Justice | US has a fear crisis, not an immigration crisis

Listen to Jesus, see how he acts, follow him

U.N. calls for governments to act after shipwreck kills 74 migrants