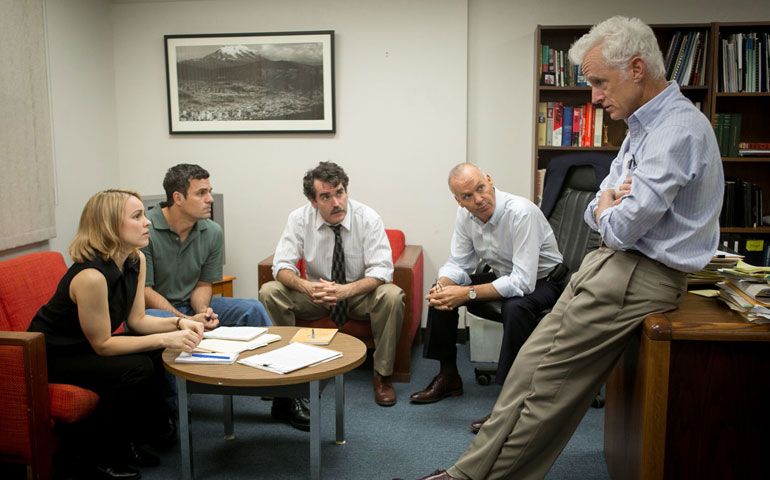 "Spotlight" is a very good movie. It might win an Oscar for best screenplay.

"Spotlight" is a very sad story. It might mark a watershed in the way priests are seen in movies.

"Spotlight" was a tragedy brought on by sins of priests and bishops. The damage is not yet finished and the perpetrators of these crimes have never been held fully accountable.

I went to see "Spotlight" by myself. I knew it would be painful to watch.

The movie is the story of The Boston Globe investigation of the priest pedophilia scandal in the Archdiocese of Boston. The scandal exploded into public awareness in 2002. The investigative team of the Globe, known as "Spotlight" had generally investigated corruption in government or the police. But they turned their attention to the Archdiocese of Boston with devastating effect. While the scandal broke in 2002, it had been simmering below the surface for years.

Michael Keaton leads an ensemble cast that is entirely believable. They capture the atmosphere of the newsroom and the atmosphere of the Catholic church in Boston. The real Spotlight team spent more than a year uncovering the child abuse scandal. They won a Pulitzer Prize for their series and they touched off similar investigations worldwide. It has been a scandal that continues to convulse the church.

As a parish priest I found it painful to watch. I was ashamed.

I went to see the movie alone. When the movie was over I sat in stunned silence in the theater and waited for everyone else to leave. I did not want to have to talk. Above all I did not want to run into any parishioners. Our church behaved horribly.

Every seminarian should see this movie. The USCCB should spend an evening watching it together and discussing it. The only disinfectant that will really lead to cleansing is the bright light of truth. The Archdiocese of Boston would never have reformed without the Globe stories.

At one point in the movie the reporters interview Richard Sipe, the former priest and psychologist, over the telephone. He has spent 40 years treating and studying the sexual behavior of priests. Sipe's character points out what I have long felt to be true: the root problem is celibacy. It creates a culture of secrecy and mendacity. People lie to themselves and the church about their abstinence from sex. They become accustomed to not telling the truth. Bishops are caught up in that clerical culture of mendacity. Sipe points out that 6% of priests act out sexually with children, which was nearly 90 priests in Boston. (nationwide 4% of priests have been accused of sexual abuse of minors, according to the John Jay study.)

The movie captures well the clannish and insular atmosphere of Catholic Boston. It took an outsider like Marty Baron, a Jew from Florida, who took over as editor of the Globe to force the paper to take on this issue. The movie mentions that 53% of the Globe readership was Catholic.

Catholic Boston was already falling apart by the late 90s, but today it has collapsed, largely as a result of the Spotlight series. The resignation of Cardinal Bernard Law was one result of the stories. The movie hints at the arrogant clericalism in Boston, that led priests and bishops to think they were above the law and accountable to no one.

Just before the final credits roll in the movie, a few words on screen mention that Cardinal Law resigned but was never held accountable. He was reassigned to Rome at St. Mary Major in a cushy sinecure. No American bishop has ever gone to jail for covering up these felonies on their watch.

Many good things have happened since 2002, largely as a result of the Globe stories. The truth is better known now. We are slightly more honest. Many victims have been helped. There is a universal awareness of creating a safe environment for children. Every priest, deacon, teacher and parish volunteer who works with children is now required to go to child abuse prevention training and to continuing online training.

We are now much more cautious about the care of youth. No priest or volunteer is ever supposed to be alone with any youth. Parish priests, like me, have adjusted our behavior. I never give any youth a ride in my car unless there are others present. I never let any youth into the rectory, unless they are accompanied by their parents. If a young person wants to have their confession heard, we go to where other people are present. On retreats or youth trips, priests and deacons do not sleep in the same room with the youth, no matter how many people are present.

As good as the movie is it tells only the first part of a continuing story. There is a need for a follow-up movie to tell the story of the enormous payouts of cash and huge settlements to victims, the stonewalling of many bishops, and the bankruptcy of eight U.S. dioceses. That movie could also tell about the many people who have stopped going to church and parish after parish has closed.

Maybe the next movie could be called "Fallout."

Thirteen years after the scandal broke many people have still not gotten the message. There is a new clericalism and arrogance among many of the younger clergy today.

Several years ago, at a meeting of priests in our archdiocese, a bishop said to us, "Gentlemen, after the scandals of 2002, priests no longer get the benefit of the doubt."

I remember leaning over to the priest sitting next to me and saying, "The bishop only gets half the message. After the scandals of 2002, bishops don't get the benefit of the doubt either."

Accountability | Watching and responding to 'Spotlight'