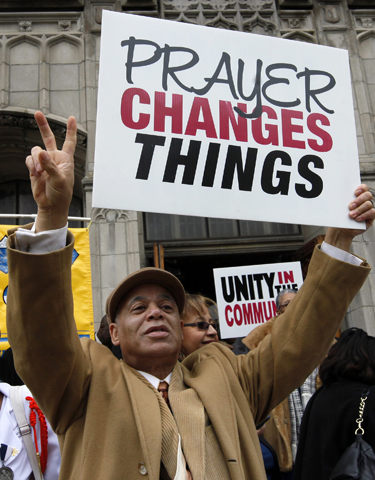 Robert Walker holds up a sign to cars outside St. Martin de Porres Church in Chicago May 1. Parishioners took to the streets to witness for peace in their neighborhood, which has experienced rising violence, after a Mass celebrated by Chicago Archbishop Blase Cupich. (CNS/Karen Callaway, Catholic New World)

Last Sunday, you remember that powerful passage in the Gospel where Jesus challenges the disciples, "Who do people say I am?" They gave some various answers. Then Jesus says, "Who do you say that I am?" Peter says, "You are the Christ, the Son of the living God." From that Gospel we challenged ourselves: Who do we say Jesus is -- the Son of God? If we do, isn't it imperative that we listen closely to Jesus, Son of God, God, part of our human family, asking us to listen to him, to follow him.

What we mean by this is not following Jesus by just walking along the road after him on the way to Jerusalem. No, it's following his whole pattern of life, living according to the values that he has been proclaiming. For most of us, that will mean a dramatic change, if we really take it seriously, that we begin to try deeply to understand who Jesus is, how he lived, and what he asks of his followers.

That kind of dramatic change that becomes necessary is made so clear in our first lesson, actually, where we see the prophet Elijah passing on his role as prophet to his disciple, Elisha. Elisha shows us the dramatic change. At first he walks away, but then he decides no, he will follow and take the role of Elijah. But before he does, to show how he is changing the whole pattern of his life, he calls his people together and he takes the oxen that he has been using to plow his fields (he's a wealthy man) and he takes them and just butchers them so that they can become food for a feast.

He takes his yoke and breaks it up to make a fire. They roast the meat and they have a feast. And then after that, Elisha is ready to follow Elijah. As it says in our lesson, "Elisha turned back, took the yoke of oxen, slew them, roasted their meat on the pieces of the yoke and gave it to his people who ate of this." After that the author says, "He followed Elijah and began ministering as prophet." With all his bridges burned now, he leaves to follow his new master.

Obviously, that's a very dramatic change in his life. It is kind of a dramatic change that God is asking of us, that we really take seriously what Jesus asks of us. That won't mean that we will do exactly the same thing that Elisha did or exactly the same thing that the other disciples did, but we will find the way that our life will follow the pattern of the life of Jesus. The first thing is to understand our relationship with material goods.

This is one of the things in the episode that happens after Jesus starts his journey to Jerusalem. One of the people along the way says, "I will follow you wherever you go." Do you remember the answer of Jesus? "Foxes have holes and the birds of the air have nests, but the Son of Man has nowhere to lay his head." He's inviting us to follow him, not into destitution or to where we are destroying ourselves by deprivation, but rather to begin to get a right regard for the goods of the earth, begin to have an understanding that God made these goods for all and not just for a few.

We have a responsibility to try to bring about a way of sharing the goods of the earth so that every person has a full human life. It's impossible for everyone in the world to live in the lifestyle that people in many parts of the developed world now live. The resources just aren't there. We have to find a way to try to share the goods, try to live moderately, try to deny ourselves to some extent so that others might have a more full life.

This will require sharing our goods when we can. It will also require us to try to find the ways that cause people to be poor and to try to change those things. But at any rate, at this point Jesus is simply saying, "Look, if you want to follow me, part of it is to simplify your life, to make sure you're not using the goods of the earth in excess or even destroying them carelessly." That would be a very important change for us.

When Pope Francis was here, he spoke about some people from our own country who are models. One of them was Dorothy Day. Do you remember? This is a person who started what we call the Catholic Worker Movement. Back in the early 1930s when the Depression was on and there were poor people everywhere (some of us in our families have stories about that), Dorothy Day began a community of people who would provide hospitality.

The community itself lived together in a simple way, following the style of simplicity of Jesus, but then sharing their goods, providing a meal every day at the community home, but also taking in homeless people and helping them to get into a permanent place to live. Dorothy Day is an example for us and surely when the pope mentioned her as one to be admired and followed, looked up to, it seems to me that we should perhaps take some time to find out more about Dorothy Day and the Catholic Worker and see if we can't simplify our life along the line that Dorothy Day followed.

But then the other element today in this conversion that we need that is very dramatic is what happens when Jesus sent a couple disciples ahead to find a place to stay in a Samaritan village. To understand this, you have to realize or have to know that Samaritans and Jews hated each other. There was always violence between them. The Samaritans were people who had fallen away from the covenant and intermarried and they were a separate group now.

They despised the Jews and the Jews despised them. It was a normal thing for Samaritans to turn Jews away, especially if they were on their way to Jerusalem where the temple is, and the sign of Judaism. John and James want to destroy the Samaritans. Jesus says, "No, let it be for now. Just go on to another village." Here we have an example of Jesus saying, "We don't retaliate. When people do evil things to us, we don't retaliate. We return love for the hate."

It's not thought about very often, but this incident is one of the best examples of Jesus and his teaching of non-retaliation. He knows the motivation of the Samaritans, but rather than return hate for hate, he understands where they're coming from and forgives and moves on. That's the key thing: Jesus doesn't return hate for hate, but he forgives. He doesn't retaliate; he forgives and moves on. Again, Pope Francis, when he was here, offered another example for us: Martin Luther King, a champion of following the way of Jesus, of nonviolence.

In a book that Martin Luther King wrote in 1967, Where Do We Go from Here: Chaos or Community? he said this, "The ultimate weakness of violence is that it is a descending spiral, begetting the very thing it seeks to destroy. Instead of diminishing evil, it multiplies it. Through violence you may murder the liar, but you cannot murder the lie, nor establish the truth. Through violence you may murder the hater, but you do not murder hate. In fact, violence merely increases hate. So it goes. Returning violence for violence multiplies violence, adding deeper darkness to a night already devoid of stars. Darkness cannot drive out darkness; only light can do that. Hate cannot drive out hate; only love can do that."

This is what Jesus is teaching, and it's spoken so well by Dr. King. Violence will only beget more violence; hate more hate. We have to act in the opposite way -- return love for hate, nonviolence for violence. That's the only way that we will overcome the violence that's so rampant in our society. That's the way of Jesus. It's what he taught at the beginning of this journey to Jerusalem. He makes it even more explicit as he goes along and hands himself over to his enemies and loves those even putting him to death.

In fact, in our second lesson today, St. Paul reminds us that those who follow Jesus follow a completely new law that's the law of love, not the law of the Jewish covenant. He says, "You're free from that. You were called brothers and sisters to enjoy freedom." What he means by that is you're free now, not to worry about violating this law or that law and you might be punished, but rather free to follow the law of Jesus.

His whole law is summed up in this sentence: You shall love your neighbor as yourself. Our conversion, if we're going to accept the challenge of Jesus today and follow him by trying to model our lives on him, will include at least these two things: living more simply, sharing our goods the best we can, and giving up violence and hatred and acting only out of love. It's a profound challenge, but with the help of Jesus and his Holy Spirit, which we share, we can begin on this journey and follow him and undergo conversion along the way.

It won't be dramatic, probably, but in fact, it reminds me of a proverb that we use in Haiti because things never seem to get done quickly. Fr. Gerry Jean-Juste, the pastor where we started the clinic that you know I still continue to support, used to say to us, "Listen, here is what the Haitians say, their proverb, 'Ti etap, ti etap, finalman ou rive.' ['Tiny step, tiny step, finally you arrive.']" That's what we can aim for in our conversion: A tiny step, then another tiny step. If we keep that up, then we arrive at the point where we become genuine disciples, followers of Jesus.

[Homily given at St. Philomena Parish, Detroit, Mich. The transcripts of Bishop Gumbleton's homilies are posted weekly to NCRonline.org. Sign up here to receive an email alert when the latest homily is posted.]