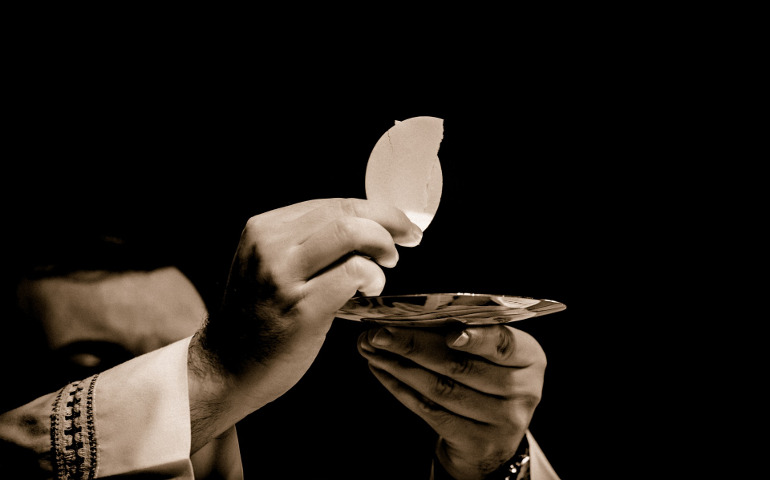 Perhaps if you remember, just a couple of weeks ago in our reading from the Acts of the Apostles, St. Luke, the author, described the early Christian community in a very extraordinary way. He said, “They were faithful to the teaching of the disciples, and to the common life of sharing, the breaking of bread and prayers. They would share all their belongings, sell their property, all they had, and distribute the proceeds to others according to their need. Each day they met together in the temple area. They broke bread in their homes and they shared their food with great joy, and they won the favor of God’s people.”

That’s a beautiful expression of that earliest community of disciples of Jesus. Here they are gathering together every day in the temple, praying, offering their prayers of love and thanksgiving and joy, but even more as a community; they shared everything. No one was in need because everyone was willing to share with the rest. There was complete harmony, almost too good to be true, it seems.

Actually, it was, because as we heard today (this was just a short time later), as the number of disciples grew, the so-called Hellenists (that would be the Greek-speaking) complained against the so-called Hebrews (those who spoke the Aramaic of Jesus) because their widows were being neglected in the daily distribution of the food. Disagreements had begun to arise within the community.

The beautiful harmony and community of love and joy that they experienced at the beginning was being torn apart. The community was splitting up. It would have been a tragedy except that the leaders immediately sensed the problem. But then listen to what they do. They don’t just say, “We’ll settle everything.” No, the apostles didn’t say, “We’re the leaders; we’ll figure out what’s wrong and make it right.” They bring the whole community together to discuss and to decide what to do.

They actually brought about a simple solution. There weren’t enough ministers, so they said, “We’ll choose more.” The community chose seven more (whom we now call deacons) and those began to minister within the community and the harmony was restored. The important lesson from all of this is not so much that there was discord and disagreement among the disciples. After all, they were humans just like the rest of us, and we know how easy it is to fall into disagreement, discord.

But what they did was to immediately look at the problem, figure out what was wrong, and resolve it. As the community began to grow, the Greek-speaking members who came from outside of Jerusalem, outside of Israel, probably, they were the ones being neglected. They decided to choose other ministers. The names are given there and they’re all Greek names, so obviously, they were getting ministers who were going to be able to know the community and serve the community. Everything became harmonious again. We can learn from that.

Pope Francis has been calling for the church to begin to function more actively as a community of disciples of Jesus around the world. He shows us the way himself. He goes wherever there are problems and he becomes part of the situation. Last week he was in the very volatile country of Egypt where there is violence — Coptic Christians being killed by Muslims. Francis brings the leaders and the people together and they begin to resolve the problem. He has asked the church to look at where our problems are and to resolve them.

But I think it’s most of all important to realize how the disciples, the leaders, resolved those problems by depending on the people themselves. That’s because they had this high regard for all of us who are the people of God. Listen again just briefly to part of this section of St. Peter’s letter where he describes what the community is: “Living stones, rejected by people, but chosen by God, precious to God.” That’s who the church is.

Further on Peter says, “You are a chosen race, a community of priests.” All of us are priests offering the sacrifices to God that show our worship of God. God has made it God’s own to proclaim God’s wonders where God called you from darkness into light. Francis has that respect for the church and for the people to resolve their problems. Obviously, one of the main problems we face today is the problem of not enough ordained ministers.

Why do you think we keep closing churches? We don’t have enough ministers. Francis has urged; he doesn’t want to just decree: here’s how you can do it. He’s invited bishops from around the world to talk with their people and come back with solutions. Of course, the obvious solution, one of them, would be to ordain married men. Francis is waiting for this to come from within the church so that people themselves realize how we can resolve our problems. And it’s huge — the problem.

I read just the other day that the Archdiocese of Chicago, with over two million Catholic people, has less than 800 priests right now. Within a decade, it will be down to less than 400 — 300 and some priests for over two million people. How can we serve the church adequately with the Eucharist and with the other sacraments if we fail to find a way to bring more ordained ministers into our church? I’m sure all of you would say easily and quickly, “I can think of ways. Ordain married men. Ordain women.” We could have all the ministers we need and quickly.

But somehow, we don’t have the confidence that those first disciples had in the people themselves. So, we’re not speaking up; we’re not saying to Pope Francis, “Here’s how we could do it.” So, we continue to lose numbers, to lose ministers, to go down. We need to be revitalized the way those first disciples were. Perhaps if we listen carefully to our gospel lesson, we’ll — each one of us — feel more ready to become the disciple Jesus wants us to be. Listen to what Jesus tells them.

He tells them, first of all, (and this is a profound moment) that he’s about to be put to death. They know it and they’re afraid. “I’m going ahead to prepare a place for you,” he tells them, to give them confidence, to give them a sense of hope. But then he goes on to explain to them how they are going to be the ones, he says, “Truly I say to you, those who believe in me will do the same works that I do, will do even greater than these, for I am going to God and everything you ask in my name God will give you.”

Jesus is explaining to those disciples that he’s giving them the spirit, the power, the way to find solutions to their problems because they share his very life. He lives in them; they live in him. That’s still true for all of us who are the church today. So, we need to listen carefully to our Scripture lessons this morning and I hope respond more fully and completely to the call that Pope Francis has given to the church to speak out.

Twice now he’s had incidents where he’s invited representatives of the church from the whole world to come together, discuss our problems, look for solutions, and present them to the church so we can adopt some of them and solve the problems that face us. Soon we must listen, not just to Pope Francis, but even more to what Jesus tells us in the gospel today, to what Peter told us, to what Luke tells us in the Acts of the Apostles.

We must listen, we must become those disciples who are truly living stones, sharing the life of Jesus, becoming priests in his name — all of us, to bring his message, his love, to make our church grow so that we can spread the good news everywhere. It’s a marvelous calling that we’ve been given and I hope as we listen to today’s Scriptures, all of us realize that each of us is called to be the disciple who can heal our church, spread the good news, and change our world.

[Homily given at St. Philomena parish, Detroit, Michigan, April 23, 2017. The transcripts of Bishop Thomas Gumbleton's homilies are posted weekly to NCRonline.org. Sign up here to receive an email alert when the latest homily is posted.]