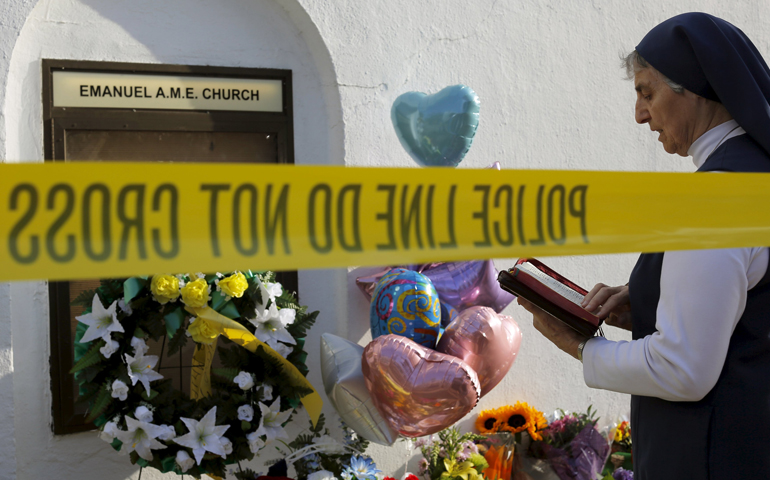 Sr. Mary Thecla of the Daughters of St. Paul prays outside the Emanuel African Methodist Episcopal Church in Charleston, S.C. June 19, 2015. Two days prior, nine people were murdered during a Bible study session at the church. (CNS/Brian Snyder, Reuters)

As we listen to today's Gospel, we know that something obviously seems very unusual, unexpected. John the Baptist, the prophet that had been called by God to prepare the way of the Lord, to prepare for the coming of Jesus, the one who had pointed out, "Behold, the Lamb of God," and told his disciples, "Follow him," John the Baptist was the one who had identified Jesus as the one who was promised, the Messiah, the Anointed One.

He was ready to let go of his own ministry, and as he said, "Let him increase and I will decrease … I'm not even worthy to untie the strap of his sandals." Now, in today's Gospel, John, who was so bold about proclaiming who Jesus is, the Messiah, is beginning to have doubts. He's in prison; you remember he had confronted King Herod about his adultery, condemned the king, and he was thrown into prison.

His life was probably going to be taken away; he's in danger of death. But he had been such a faithful prophet, and had proclaimed the coming of Jesus, and now he was overcome with doubts. It's hard, I think, for most of us to think that a saint, a bold prophet like John the Baptist could have doubts about Jesus just as we might have doubts in our faith. But surely, John had doubts because there had been different kinds of messiahs foretold.

Some had thought it was going to be like David, a warrior king who would overthrow their enemies, the Romans. Most expected at least a bold proclaimer of the message of God, like a John the Baptist, or like a Jeremiah, or Elijah. But here is Jesus coming along, totally different. Remember, John had lived a life of extreme austerity, fasting, robed in very primitive garments, living in the desert, but proclaiming a harsh message.

In fact, we heard some of that message just a week ago when John proclaimed to the Pharisees and Sadducees, "You brood of vipers, punishment is to come and do not think that you can cry out, 'We have Abraham for our father,' and then you will be saved. I tell you God can raise children for Abraham from these stones. Look, the axe is already put to the roots of the trees. Any tree that does not produce good fruit will be cut down, thrown in the fire."

John was a prophet who preached what we might call hellfire kinds of sermons. He proclaimed a message that was hard, a message that was judgmental, a message that condemned, and how different Jesus was. John expected Jesus to be that kind of a messiah. But when John's disciples came to Jesus, he said, "Go back and tell them what you see and hear: How the blind receive sight, the lame begin to walk, the deaf can hear, even the dead are raised to life. The good news is being proclaimed to the poor."

Words that are taken right out of our first lesson today from the book of Isaiah where Isaiah was proclaiming the return of the Chosen people and the renewal of their land and their life. Jesus not only preached that way and healed and reached out to those who were outcast and sinners, he welcomed them. Many times he would go to the home of a sinner and have a meal. People complained, "He eats with publicans; he eats with tax collectors."

When the Pharisees brought Jesus a woman caught in adultery, he said, "The one without sin throw the first stone." They wanted to stone her, kill her. Of course, they all walked away and Jesus said, "Is there anyone to judge you?" "No." "I don't either. Go and sin no more." Or like he tells the story of the prodigal who wastes his inheritance, lives in sin, and then finally comes back and the father runs out to meet him. He doesn't go up to punish him; he welcomes him with love. Jesus is preaching a whole different kind of message than John the Baptist and many of the prophets, and John found it hard to accept.

Perhaps we also find that message hard to accept because Jesus is telling us that we're not going to change the world, transform the world into the reign of God through power or might, being the greatest, using force or violence. It will only be through love. We have to forgive, reconcile, and forgive even our enemies. That's a different kind of messiah than John the Baptist expected. In the days that were left to him he had to undergo a conversion to follow Jesus.

Probably most of us, too, still need to be converted to really be ready to follow the way of Jesus. In one of his Peace Day statements, St. John Paul declared about rejecting violence and hatred. He said, "I was able to say and I repeat it now, violence is a lie, for it goes against the truth of our faith, the truth of our humanity. Do not believe in violence; do not support violence. It is not the Christian way. It is not the way of the Catholic church. Believe in peace and forgiveness and love; for they are of Christ and only these."

We go through this season of Advent to prepare for the coming of Jesus so that we can renew our commitment to follow him — Son of God, Son of Mary, and brother to all of us. Are we ready to follow the Jesus who is proclaimed in today's Gospel? Perhaps you followed in the news the account of that trial regarding the death penalty in South Carolina — Dylann Roof, the young man who shot to death nine people at the church in Charleston.

They played a tape of his confession; it was so devastating to watch. He showed no remorse whatsoever, was proud that he had done it, was surprised he had killed nine; he thought it was only four or five. But he said, "I had to do it. Black people are raping white women by the hundreds every day. Black people are killing white people all the time. We have to stop it. Somebody has to begin, so I did it." He's not the least bit sorry. That jury has got to decide: Will they put him to death or not?

If you understand Jesus and how he tries to return love for hate, kindness for unkindness, goodness for evil, then you would have to say, "No, that's violence and violence is a lie. It goes against the truth of Jesus, the truth of the church." Perhaps we're not ready yet to really follow this way of Jesus, but it's pretty clear that it's different from the kind of prophet John the Baptist was and other prophets. Jesus comes to show us a new way, the only way to overcome violence and hatred and killing on a local level and throughout our country, or in the world; the only way, the only solution is love. Peace, forgiveness, and love — these are of Christ. We pray in Advent now that we will be ready to follow Jesus who proclaims peace, forgiveness, and love.

[Homily given at St. Philomena, Detroit, Mich., Dec. 11, 2016 The transcripts of Bishop Gumbleton's homilies are posted weekly to NCRonline.org. Sign up here to receive an email alert when the latest homily is posted.]