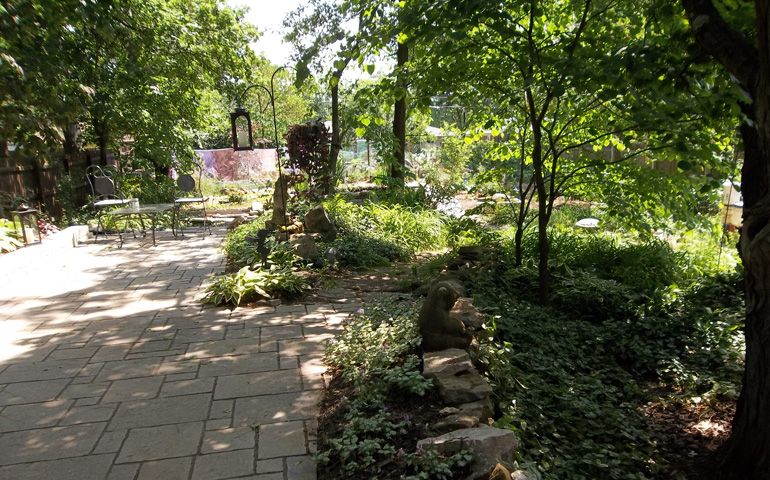 Columbus, Ohio — Thomas Moore, the spirituality writer, praises gardens for their role as the reconcilers of "human art and wild nature, hard work and deep pleasure, spiritual practice and the material world." A garden at its very core is "a magical place because it is not divided," he writes in his book The Re-Enchantment of Everyday Life.

Moore could have been penning these words from Marie Sweeney and Fred Taylor's screened-in back porch while enjoying the wild green vista that extends outward. At 10,345 square feet, this garden seems to go on forever.

The front yard of their modest, blue Clintonville home provides no clue of what is thriving out in the back 40. The front's floral inhabitants include sundrops, coneflowers, foxglove, lamb's ear, yarrow, lavender and coreopsis. A sundial stands sentry off to the side of the yard. A black bear statue extends its arms and paws in welcome.

But step beyond the Sweeney-Taylor doorway, through their calm, orderly living room, past the friendly kitchen to the screened in porch, and a totally different scene emerges. This is a garden primeval. The expanse of bushes, trees, flowers and ferns is immediately overwhelming.

The eyes pick up an unexpected pop of color from the pink and purple curtains waving in the breeze. They take in the white and yellow daisies, the purple butterfly bushes, the oranges and yellows of the daylilies, the flash of goldfish swimming in the pond, the ferns, the herbs. It is only the first week of June, but the water lilies are blooming.

"And we've had lettuce for a month," Sweeney says.

And then, during this garden tour, one notices two more ponds that don't have any goldfish or water lilies. These are strictly utilitarian. An antiquated garden hose is spouting a continuous stream of running water into them. They are designed to catch gray water from the kitchen sink, bathtub and washing machine. Old carpeting, rescued from one of Taylor's dumpster-diving sessions, serves as mulch around the ponds.

Taylor began digging the ponds himself by hand more than 20 years ago after his first wife, Ann, was killed in an automobile accident. Fred sustained painful tissue injuries himself. When he left the hospital, his grieving process led him to their backyard, where "I just started digging." Taylor didn't have any specific plans in mind. The three ponds eventually emerged.

And what about those purple and pink curtains hanging over there in the corner? They are for keeping the critters away from the raspberries and strawberries.

Both of the Taylor-Sweeney gardens serve as the pallets for their ongoing spiritual practice. "They are my church, my hobby, my avocation and my gymnasium," Taylor says. "Gardening and landscaping are a meditation that takes me from thought to action without thinking."

He elaborates: "God is nature, and nature encompasses all that there is. In the garden, I feel closer to the beauty and mystery, the messiness and magic of the cycles of life and death."

For Sweeney, gardening is "participating in the imagination of God. It's all real with the 'what ifs.' Let's have beauty, some symmetry, but not too much. It's a balance between creativity and predictability."

Through gardening, she is reminded of generosity, and she is thankful. "Opulence is picking breakfast. When I go to the raspberries and bow down to pick them, it is like a sacred dance." When Sweeney accidentally breaks off a branch, she apologizes to the plant.

Does she believe in fairies and plant spirits? "Of course. I'm Irish. When the lightening bugs come, I know the fairies are there, too."

The story of the Taylor-Sweeney gardens intertwines with the couple's own lives. As a kid, Taylor helped out in his dad's hobby garden, but it wasn't a particularly enjoyable experience. The elder Taylor earned a living for the family by operating an auto parts business in Geneva, Ohio. He loved tinkering with cars and everything mechanical. But as far as young Taylor was concerned, there were too many machines around, including the farm tractor. There was too much preciseness and orderliness muddying up his life. He hated the monotonous rows of green beans.

"When I picked them, I used to wonder if I would ever get to the end," he says. The result: Taylor rebelled against machines, precisely planted rows and too many green beans. He went the academic route, graduating from Ohio State University with a chemistry degree. After working as a chemist, he switched to a career in massage therapy. As he matured, Taylor also rebelled against the rigidly stern rules of his Catholic upbringing. During the 1970s, he became an environmentalist. By 1979, he was composting, a practice almost unheard of at the time.

While Taylor was learning to dislike mechanical things, orderly gardening and churchy religion, Sweeney, an Irish Catholic, was growing up in Boston. She loved the ocean and the beach. Every afternoon, she walked along the seashore with her dad and little brothers. During junior high, she spent every minute she could visiting a family friend's dairy farm. "Chasing cows brought me alive," she says.

Sweeney planted her first garden while serving as a Sister of Charity of Nazareth, Ky. On assignment to a children's home in Nashville, Tenn., "I wanted to let the kids know where their food came from." After moving to Columbus, she was a member of the pastoral staff at the Ohio State University's St. Thomas More Newman Center for several years. She eventually left her religious community to go into hospice work. Throughout these transitions, gardening remained the constant in her life.

A mutual interest in ecology brought Sweeney and Taylor together. His garden was already an advanced work in progress when they started dating. But Sweeney was a little puzzled at first by the deep holes in Taylor's backyard, the old scrap metal and bedsprings, and the ratty-looking carpeting "I knew we were both environmentalists, but I did get a little nervous at first," she said.

As she would learn, repurposing and letting things evolve in utilitarian chaos were part of Taylor's gardening process. Through 16 years of marriage, the couple has learned to combine their respective utilitarian-aesthetic approaches.

A few years ago, though, one neighbor not at peace with the backyard goings-on reported Taylor and Sweeney to the city of Columbus for perceived code violations. Taylor, however, had been on top of things early on. When he first decided to put in his ponds, he inquired about permits, but "nobody had ever heard of a water garden." So Taylor simply continued with his plans.

Following the neighbor's call, however, three carloads of officials from the water, sanitation and health departments arrived unannounced to inspect the garden for themselves. Taylor showed them that there was always running water in the ponds, "that there were no wigglers" and that the gray household water ends up in a nearby creek.

The inspectors were satisfied and asked him to make a couple of inexpensive minor tweaks to the operation, which Taylor did.

One of the bureaucrats, however, went into an unbureaucratic state of awed appreciation by what she saw during her garden tour. "Oh, my God, this is beautiful," she exclaimed to a colleague. "These people are doing great things."