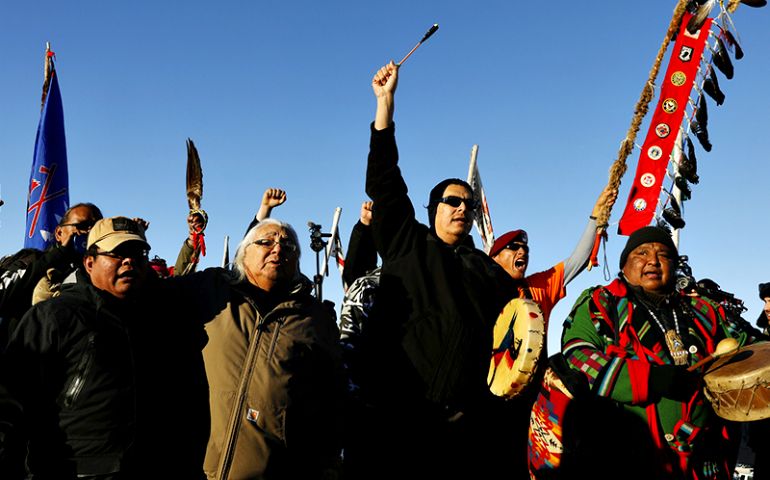 "Water protectors" celebrate that the Army Corps of Engineers denied an easement for the $3.8 billion Dakota Access Pipeline at the Oceti Sakowin Camp near Cannon Ball, N.D., Dec. 4. (RNS/Reuters/Lucas Jackson)

Native Americans and their allies viewed as a cautious win the decision Sunday by the U.S. Army Corps of Engineers to deny construction of a contested section of the Dakota Access Pipeline and to consider alternative routes.

The Standing Rock Sioux Nation and other "water protectors" for months have opposed the pipeline, which is being constructed by Dallas-based Energy Transfer Partners. Opponents say it presents a threat to their primary water source, the Missouri River, as well as to land near the south-central North Dakota reservation they view as sacred and home to burial sites.

In a statement, Dave Archambault II, Standing Rock Sioux tribal chairman, said he and the tribe "wholeheartedly support the decision" by the Army to deny easement, or permission, for Energy Transfer Partners to dig under the river near the Standing Rock reservation. He thanked the Obama administration and those who stood in solidarity with Standing Rock, either directly by coming to the Oceti Sakowin Camp near Cannon Ball, N.D., or more distantly though online advocacy, donations and prayers.

Mercy Sr. Aine O'Connor, one of a handful of Catholics who joined an early November solidarity demonstration of 500-plus clergy and laity, said the corps' decision "was first and foremost an answer to the prayerful calls from the tribe which literally united millions of us around the globe, to not only protect water rights but the sovereign rights of the people."

She told NCR that the Standing Rock demonstrations, which have had prayer at their center since they began in April, offered a profound example for Catholics of expressing faith and justice as called by their faith and tradition, most recently by Pope Francis in his encyclical "Laudato Si', on Care for Our Common Home" and with his inclusion of care for creation among the corporal and spiritual works of mercy.

"Throughout this effort, I have stressed the importance of acting at all times in a peaceful and prayerful manner — and that is how we will respond to this decision," Archambault said. "With this decision, we look forward to being able to return home and spend the winter with our families and loved ones, many of whom have sacrificed as well. We look forward to celebrating in wopila, in thanks, in the coming days."

An interfaith prayer service was held Sunday at the Oceti Sakowin Camp, with others elsewhere participating in their own way. Hours later, the Army announced its decision to block construction of the pipeline underneath the Missouri River at Lake Oahe, a reservoir about a half-mile north of the Standing Rock Sioux reservation and the focal point of the pipeline opposition.

In a statement announcing the decision, Jo-Ellen Darcy, the Army's assistant secretary for civil works, said a "more heightened analysis, in my judgement, is appropriate," through an environmental impact statement that is to include "more rigorous exploration and evaluation of reasonable siting alternatives, and greater public and tribal participation and comments," as spelled out in the National Environmental Policy Act.

As part of the environmental impact statement, she ordered the Army Corps of Engineers to consider alternate locations for the pipeline's crossing of the Missouri River, including a more detailed review of a previous route that took it north of Bismarck, N.D. She also directed for a detailed discussion about the risk of oil spills and potential impacts to Lake Oahe and tribal water rights, as well as to fishing and hunting rights under treaties, along with a broader discussion of the tribe's treaty rights in the region.

"I'm delighted," O'Connor said of the decision, which she noted arrived amid the hope of the Advent season. "But there is a caution in me that we have to kind of just remain vigilant and on top of it."

O'Connor, a former Mercy Global Action coordinator at the United Nations and convener of the Mining Working Group, a coalition of nongovernmental organizations, described what happened at Standing Rock — where Native American tribes from across the country have convened against the pipeline in what they have called the largest such gathering in modern times — as "incredibly historic."

Despite the tribe's insistence on a peaceful, prayerful demonstration, violence at times broke out among the "water protectors" (a term Native Americans, environmentalists and others who oppose the pipeline use for themselves) and local law enforcement. Both sides accused the other of initiating the encounters, which have seen more than 500 arrests and police use of tear gas, rubber bullets and, at one point, water cannons to break up the protesters during a night when temperatures dropped below freezing in the open North Dakota prairie.

In his statement, Archambault said he recognized the "extreme stress" the monthslong demonstration had placed on local law enforcement — some officers worked a month without time off — and said he hoped "we can work together to heal our relationship as we all work to protect the lives and safety of our people."

To O'Connor, the sight of what she called a militarized response to a peaceful assembly left her "speechless."

"It cut me at my core, that this level of militarized response could occur in the United States to water protectors," she said.

"It was the scale of the militarized response," she added, that surprised her and signaled to her a prioritizing of corporate interests over people, specifically over the sovereign rights of Native Americans.

During the Nov. 3 solidarity witness of faith groups, O'Connor said she and others felt a police presence not only on the Backwater Bridge, where the sides clashed in late October, but with posts set up on the hills surrounding the area. Since that time, the Mercy sisters and other faith leaders have put their attention on calling for President Barack Obama to stop the militarization of the police.

While North Dakota Gov. Jack Dalrymple, who supports the pipeline, last week issued an evacuation order of the camp with a deadline of Monday, he clarified that he did so with an eye on the coming winter season and said he would not forcibly remove anyone. A group of military veterans, as many as 2,000 anticipated, arrived at the camp over the weekend.

Images on social media from the camp Monday showed blizzard conditions, which prevented some from exiting the outpost. Others stressed the need to remain, fearful that Energy Transfer Partners would ignore the Army's order and continue construction.

In a statement Sunday night, Energy Transfer called the decision "a purely political action" and said it remains "fully committed to ensuring that this vital project is brought to completion and fully expect to complete construction of the pipeline without any additional rerouting in and around Lake Oahe. Nothing this Administration has done today changes that in any way."

The energy company has said it has followed all necessary review processes and that completing the $3.8 billion project, which would carry 470,000 to 570,000 barrels of oil daily across four states, will provide a safer way to transport oil than by rail or truck. The Army Corps of Engineers has overview of roughly 37 miles of the 1,172-mile pipeline — primarily at its 202 water crossings, each requiring the corps to individually review and issue permits.

Even with the project on hold at the Lake Oahe point, the pipeline is mostly built. What happens next may depend on President-elect Donald Trump, who has said he supports completion of Dakota Access. According to The Washington Post, the New York businessman over the summer sold off shares he held in Energy Transfer Partners.

Standing Rock Sioux Chairman Archambault said the tribe "and all of Indian Country will be forever grateful" to the Obama administration for its courage "to take steps to correct the course of history and do the right thing." He added that he hoped Energy Transfer, along with the incoming Trump administration, would respect the decision, the process that led to it, and "the multifaceted considerations of tribes" in such future projects.

"We are not opposed to energy independence, economic development, or national security concerns but we must ensure that these decisions are made with the considerations of our Indigenous peoples," he said.

O'Connor, though, was optimistic an environmental impact statement could review the entire pipeline project and ultimately conclude that the risks it poses not only to water supply and sacred lands but to the climate make it untenable. She anticipated the Mercy sisters will connect Dakota Access to larger concerns they have with other pipelines and other aspects of climate justice.

"I'm personally hopeful that this [Army Corps decision] will change something to stop the pipeline in its tracks. But I'm not naive. I think it has many aspects to it that we all need to keep our own resistance to in the long term," she said.