A Liturgy of Lament and overcoming the specter of sex abuse 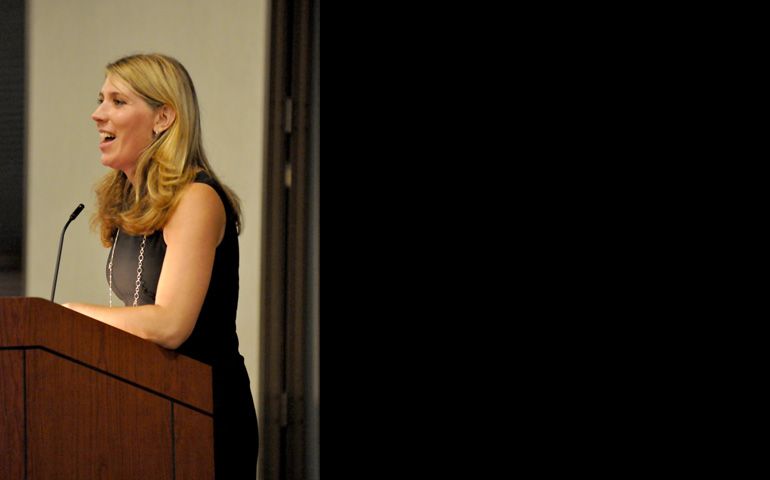 As I sat listening to Jennifer Haselberger accept FutureChurch's Fr. Louis J. Trivison Award on Sept. 19, I couldn't help but reflect how proud Father Louie would have been.

Jennifer is a canon lawyer and the whistleblowing former chancellor of the St. Paul-Minneapolis archdiocese. She resigned in 2013 after Archbishop John Nienstedt refused to take seriously her findings of an intentional cover-up of clergy sex abuse by archdiocesan officials. She hoped her resignation would "prompt an external investigation and lead to internal changes." When that failed to materialize, she collaborated with Minnesota Public Radio in a pivotal, and unprecedented, exposé of the archdiocese's callous mishandling of sexual misconduct by clergy.

"For me, the decision to go public was an easy one," she said.  "After years of feeling embarrassed by the contradictions between the archdiocese's external positions and internal actions, I wanted to be able to look the people in my community in the eye again."

As Jennifer spoke of the horrendous events still unfolding in St. Paul-Minneapolis, I recognized the all-too-familiar gut-punch Minnesota Catholics are now enduring as they cope with daily reports of betrayal by bishops and priests they had formerly admired.

We went through this in Cleveland beginning in 2002. Father Louie, along with many other Cleveland priests, was devastated when news of our own diocese's cover-up of clergy sex abuse came to light. To address the crisis, Louie helped organize a special diocesewide accountability coalition of lay leaders that met regularly for over two years. He rarely missed a meeting.

This coalition created special resources to help ordinary Catholics reach out to lay representative bodies -- such as the Diocesan Pastoral Council, finance and parish councils -- and push for accountability and financial transparency in church structures. It was rough going because our diocese is as secretive as everyone else's. Sadly, we would discover how secretive in 2007, when the FBI launched a full-blown financial investigation.

As the scandals filled Cleveland airwaves month after month, we found ourselves in desperate need of solace and healing. One day, a clergy sex abuse survivor, "Stephen," telephoned to say he had written original hymns for a special healing prayer service, but the diocese had refused to sponsor it. Would FutureChurch sponsor the service?

Stephen and I subsequently met with my friend and former liturgy professor Fr. Joe Fortuna. With Father Joe's expert assistance, we created a special Liturgy of Lament for the Broken Body of Christ. A month later, nearly 200 people participated in a public service at Father Joe's parish. Scores of victim/survivors attended, bringing along their therapists. It helped everyone, victims and mourning Catholics, alike. It helped a lot.

What I did not understand at the time -- but Father Joe did -- was how much the Judeo-Christian prayer tradition of lament could help us deal with profound psychological pain.

Sometimes things are so breathtakingly awful, there is nothing to do but lament. Our Jewish forebears understood this. Laments bring our brokenness, our cries for deliverance, and our desperate need to God with the full expectation that God will hear and respond. According to biblical scholar Gail R. O'Day in A Feminist Companion to Matthew:

Israel was not afraid to make its needs known to God and to assert that those needs and injustices, those complaints and fears, were God's business. ... What is most astonishing about Israel's lament psalms is that the candid speaking of pain in the liturgy actually worked: the transformation of pain and the meeting of need did indeed take place. ... Israel boldly, often brazenly, placed its claims before God, and God listened and responded.

I would say O'Day's description matches the experience of quite a few Cleveland Catholics (at least the ones who didn't leave the church altogether). The pervasive problems, sins and shocking betrayals of our diocese remained. But we slowly began to experience a God who is bigger than all of it, a God who is far more faithful than any messed-up hierarch ever could be. No amount of sinfulness can overcome crucified, resurrected Love. We took new heart because our faith, after all, is rooted in Jesus the Christ, not in any bishop.

This is probably a new idea for many Catholics. Yet it is most assuredly true.

Working with great priests like Father Joe and Father Louie (who died in 2010) also helped us remember what a great gift the priesthood can be in our church.

I would like to think Jennifer's powerful witness is a harbinger of good things to come as lay leaders who are not part of the clerical system and who could have less to lose by blowing the whistle fill more chancery positions. This rosy thought quickly fades, however, with the realization that not every lay leader has the moral rectitude of a Jennifer Haselberger. For example, Joseph Smith, a layman and the former CFO of the Cleveland diocese, served prison time for conspiracy and tax fraud during his employment.

Laypeople have no corner on the market when it comes to honest and upright behavior in the execution of their responsibilities in the church.  All of which gives potential cause for more lamenting.

Yet as St. Paul tells us in Romans 5:20, "Where sin abounds, there grace abounds all the more fully." We count on that grace as people and priests together work for transparent and accountable church structures to reflect the goodness of the God we serve.  Already in Minneapolis, 17 new child protection protocols exist because of Jennifer Haselberger's integrity and her action.

When Father Louie died, we published a playful tribute written for his retirement party by his good friend George Eppley. Discussing the (un)likelihood of Louie's future canonization, Eppley wrote:

There is good news and bad news. The bad news is that all the members of the commission on canonization will vote negative on the question of whether Louis Trivison should be canonized. We should not be surprised. All through his priesthood, the decision makers in Rome have been voting negative on Lou Trivison. ... He would have gone farther but he was more interested in pursuing the power of truth than the truth of power. When he had to deal with the hierarchy, which he did rarely and reluctantly, he kissed only the ring.

While most of us have not seen much ring-kissing for at least 20 years, the advice to "kiss only the ring" still seems apt for priests and lay leaders alike.

So profound thanks, Jennifer Haselberger, for pursuing the power of truth.

Thanks, too, for your prescient management of various episcopal patoots encountered along the way.

Liturgy of Lament resources are available for free download here.