How can 21st-century minds draw meaning out of Marian apparitions? 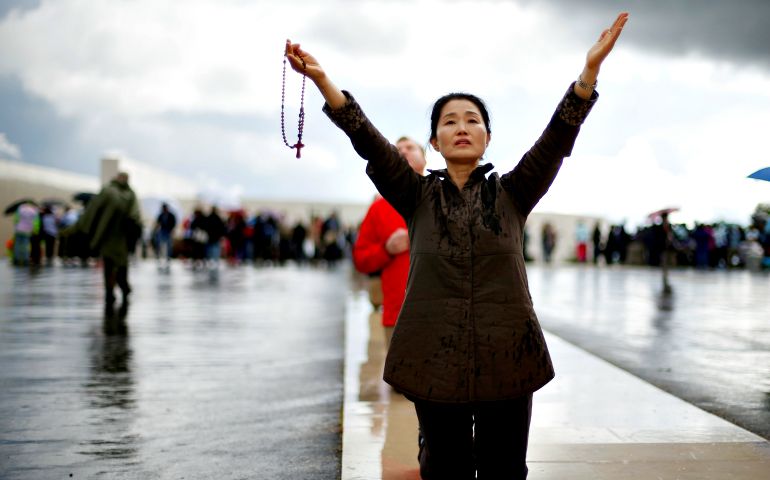 A pilgrim holding a rosary walks on her knees May 12, 2016, at the Marian shrine of Fatima in central Portugal. (CNS/Reuters/Rafael Marchante)

Pope Francis has announced his intention to visit the shrine of Fatima in Portugal this May on the 100th anniversary of the first of several reported apparitions of the Virgin Mary there to three children.

Many Protestants, including me, have never quite known what to do with reports of such Marian apparitions. For some, they fall into a category that includes people who report seeing the face of Jesus on a grilled cheese sandwich. For others, they are simply one more theological or spiritual mystery that defies rational scientific explanation but that, nonetheless, carries the freight of spiritual meaning for some people.

I am in that latter category, though I admit that sometimes I find myself drifting into the cheese-sandwich-face crowd.

But I understand that we live by metaphor, by myth, by allegory, as I explain in my latest book, The Value of Doubt: Why Unanswered Questions, Not Unquestioned Answers, Build Faith.

And my hope is that the pope will spend a little time on this trip helping everyone — Catholic or not — understand how we are to draw meaning out of these Marian apparitions, which seem to many 21st-century minds so literalistic, so incomprehensible save for an appeal to metaphor, myth, allegory and, well, mysticism.

The mystic tradition in Christianity is long and, in many ways, honored. Perhaps it's within that tradition that Marian apparitions belong. If so, the pope could help us by using his trip to Portugal to explain that in some detail, along with how those of us who have not experienced any such apparitions are to think about those who have.

When I talk about the mystic tradition, I include — perhaps inaccurately — the apocalyptic writings found in the Bible, such as the book of Revelation.

It's worth remembering that the great reformer John Calvin, godfather of the Reformed tradition in which we Presbyterians locate ourselves, declined to write a commentary about Revelation. Why he didn't do that has remained a bit of a mystery, though some reports suggest he either didn't understand the book or thought that it unnecessarily hid meaning about Christ that the rest of the New Testament revealed.

In any case, in Christianity, there's a fair amount of mysterious and symbolic spirituality that should not be taken literally. Biblical literalism, in fact, is a plague of our time that misses much of the deeper meaning of Scripture.

The idea of biblical inerrancy finds its roots in interpretive scholarship that began in the Enlightenment and gained popularity in the 17th and 18th centuries. When Protestant reformers insisted on sola scriptura, or scripture alone, as the foundation of Christianity, they opened the door to misreadings of the Bible that relied on literalism.

"And misreading followed," writes Catherine M. Wallace in Confronting Religious Absolutism, part of her "Confronting Fundamentalism" series of seven books. "Misreading followed because Protestant versions of radical theological modernism insisted that Scripture is absolutely authoritative for Christian belief and practice. And if that's the case, then Scripture cannot disagree with itself in any significant regard."

But, of course, we know that Scripture often disagrees with itself, starting with the two creation stories in Genesis that don't match up.

So reading the Bible as inerrant historically and in all other ways reflects a low view of Scripture and religion that seems to make little or no room for the kind of mystical reports inevitably associated with Marian apparitions.

Here is where the pope can help all of us. He need not question the sincerity of the three children's reports in Portugal from 100 years ago. He need not say either that the apparitions are meaningless for our time or that they are to be understood as literal experiences.

Instead, if he were simply to help all of us draw meaning from the children's reported experiences in a way postmodern minds might grasp, many of us Protestants would give thanks.

Spirituality | How can 21st-century minds draw meaning out of Marian apparitions?

Francis' trip to Fatima to be taken as pilgrimage for peace