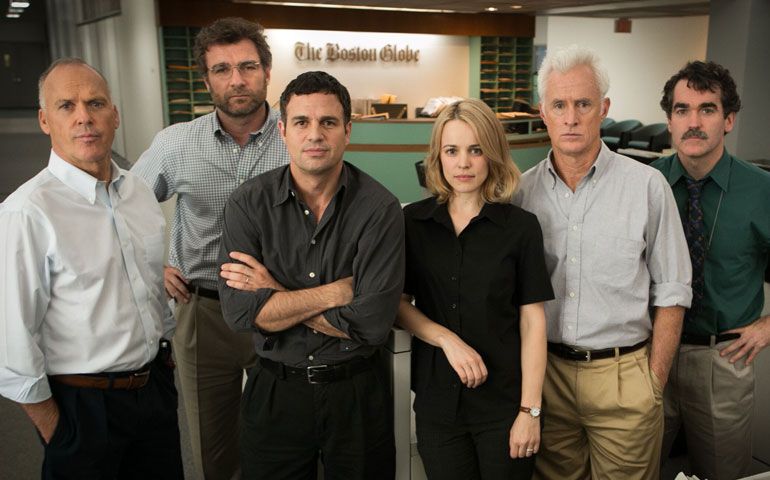 Because my daily calendar often looks like a picture of nuclear winter drawn by a third grader, it took me several weeks to find time to see "Spotlight," the film about The Boston Globe's investigative stories on abusive priests there.

I liked Sr. Rose Pacatte's NCR film review published last month and, once I saw the movie, I agreed with her that it was terrific.

The film offered a well-nuanced look at evil and the reality that each of us is capable of it. But it also offered something else that it would be well for people of faith to ponder, something not directly connected to the scandal that the Globe revealed about abusive priests and the perfidious hierarchy that protected them (a story that NCR had been covering in various ways even before the Globe turned its Spotlight reporting team onto it).

It's this: As newspapers struggle to stay alive in the digital age, what media outlets will be left to invest the time and money it takes to give citizens the information they need to hold their governments, their civic organizations and their faith communities accountable?

If truth, honesty and moral transparency are values that the Christian church teaches -- and they are -- what happens when a primary resource for discovering lies, dishonesty and moral cover-ups in our culture either disappears or is so eviscerated that it cannot do its job well?

There still are newspapers doing good investigative work. But it's tougher and tougher to detach reporters from covering everyday house fires, murders and city council meetings to invest the kind of time that the Globe's Spotlight team spent to uncover what former Boston Cardinal Bernard Law and other loathsome members of the church's governance structure (and some in the legal profession) wanted to keep hidden.

I once spent the better part of a year at The Kansas City Star writing a series of articles showing that 50 square miles of our central city had been redlined by lenders of traditional mortgages -- and then describing the financial and human disasters that resulted from that. I cannot imagine anyone today at most newspapers being given that kind of time to tell such complex but necessary stories.

So what do we do? First, we must continue to support newspapers (including their online presences) that are doing at least some of the investigative work that needs to be done. But we also must find other ways to tell these crucial stories.

Are there broadcast media, blogs, digital news operations and other outlets that can reliably and credibly report challenging stories that the public can learn to trust? Maybe. But the economics have to make sense, which is why newspapers are supported by advertising.

And if such outlets are to be viewed as trustworthy, can they be funded by some disinterested party that will allow reporters free reign? Or does the funding come with an understanding that the reporting will reflect certain policy positions or points of view? If the latter is the case, then we're still without media that can be fair and dependable.

Just within the world of religion, well-trained journalists are needed to tell the countless stories of both good and evil (and the broad expanse between them) that adherents of various faith traditions need to know about -- from the continuing priest abuse scandal to violent extremists justifying their actions by citing Islam to prosperity gospel preachers bilking the masses while flying around in $65 million dollar private jets.

So good for the Globe for its work described in "Spotlight." But let's put our best minds together to figure out who will tell the next improbable and long-hidden stories about scandal in our religious and civic communities.

[Bill Tammeus, a Presbyterian elder and former award-winning Faith columnist for The Kansas City Star, writes the daily "Faith Matters" blog for The Star's website and a column for The Presbyterian Outlook. His latest book is Jesus, Pope Francis and a Protestant Walk into a Bar: Lessons for the Christian Church. E-mail him at wtammeus@gmail.com.]