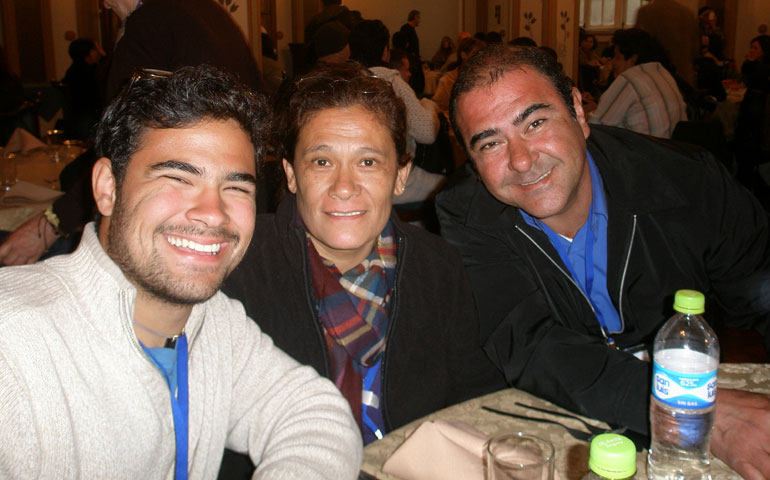 Recently I participated in an international conference in Peru for Latino/a families with sexual diversity. As I sat down in an assembly room in a large government building, Susana Villarán, Lima's first woman mayor, welcomed several hundred attendees from 24 different countries to the city.

I found myself next to Monica Nunez-Cham and her husband, Arturo Gomez, who were from San Diego, Calif. By the end of the four-day conference, Monica became not only my main translator, but also my teacher and friend. In between sessions, Monica told me the story about her son, Isaac Gomez, who also participated in the conference.

Isaac was born a biological female. From the time he was 2 or 3 years old, he did not want to wear girls' clothes. When he did, Isaac's usual sunny disposition became melancholy and dejected. When his grandparents in Mexico bought him "boy" toys, Isaac was happy.

Isaac loved to play sports with the boys. His name at that time, Marifer, was feminine in Spanish, but sounded androgynous in English. Marifer was well-liked by schoolmates, who treated him as a boy.

The teachers and administrators in the public school system empathized with the situation. While there was a dress code, Isaac was permitted to dress as a boy for classes and for graduation. (I found myself wondering if Catholic school personnel would have been as understanding.)

Always a cheerful and kind child, Isaac must have had some experience or pushback around the age of 12 that prompted him to say he would henceforth be a girl. He did not want to be a freak, he said. Why did God make a mistake, he asked? Monica wondered where he got these notions -- certainly not from his parents and siblings. All his grandparents, although traditional Catholics, loved and accepted Isaac as a boy.

At first Monica thought Isaac was imitating his older brother, instead of his middle sister. She told Isaac that little girls can play sports with boys and wear boys' clothes. Eventually Monica came to understand that Isaac's feelings and behaviors represented a phenomenon more fundamental than sibling imitation or rejection. This was something crucial to her child's identity.

After many family discussions and extensive consultation with health professionals, Isaac began hormone treatment at age 13 to transition to a biological male. His name was now consistently Isaac and male pronouns were constantly used. The following year there was surgery for a double mastectomy. Further constructive surgeries followed. Now 19 years of age, Isaac is a handsome, well-adjusted and intelligent young man attending university. Except for that one tumultuous year, Isaac continues to be the cheerful person he was as a child.

I find myself reflecting on this story long after the conference. Why do we call people freaks? What is normal? How do we know what God wants us to be? What is there in each of us that makes us want to be the same as others? Or at least, if not the same, what makes us want to belong or fit in, to feel like an insider, not an outsider?

We use the derogatory word freak to label a person who does not look or act as most of the people we know. We might as well call brilliant people, such as Einstein, freaks. Why do we insist that people be homogeneous? Sameness can be dull and boring.

We use the word normal to mean "what is accepted." Isaac felt he fit in, was accepted and loved by his family, but he wanted that circle widened. He wanted to be normal or appreciated by the wider human family.

The longing to belong lies deep in the heart of each human being. We want desperately to connect, to feel part of the whole. The greatest suffering, I believe, is a feeling of abandonment, of isolation, of not belonging. It is the overwhelming pain of rejection that Jesus experienced on the cross as he cried out, "My God, my God, why hast thou forsaken me?"

I find myself praying for a society where we see with the eye of our soul that differences are gifts that enrich the human family, where diversity is considered a blessing by which we can learn from each other. God's imagination does not make cookie-cutter human beings. I want to work for the day when we are all insiders, unique in our identities and grateful for who God created us to be.

How do we know what God wants us to be? I believe the answer lies deep in our hearts. God uses our feelings and attractions, our desires and longings, our abilities and disabilities, our likes and dislikes to point us in the direction God wants. In the sanctuary of our souls, where we are alone with God, we find God's affirmation of who we are to be.

Just as one's conscience must be obeyed, even against any political or ecclesiastical authority, so too one must become the person God intends, despite social acceptance or rejection, because it is this becoming that constitutes the very dignity of the human person.

Isaac teaches me that it takes great moral courage and integrity to become the person God intends us to be, and that family is leaven for a good life.

[Loretto Sr. Jeannine Gramick is leading advocate for lesbian, gay, bisexual and transgender rights as a co-founder of New Ways Ministry. Her books include Building Bridges: Gay and Lesbian Reality and the Catholic Church and Voices of Hope: A Collection of Positive Catholic Writings on Gay and Lesbian Issues.]

A version of this story appeared in the Aug 30-Sept 12, 2013 print issue under the headline: Becoming the person God wants us to be.