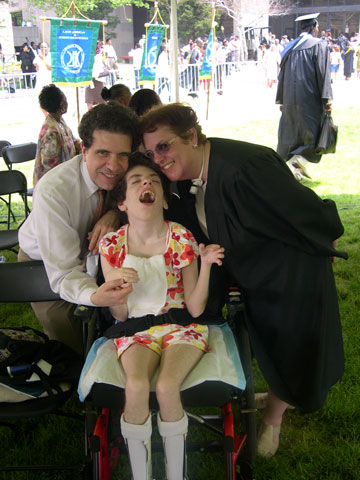 by Evander and Fotini Lomke

"In every human being there is a special heaven, whole and unbroken." -- Paracelsus

Our bright, curly-haired 3-and-a-half-year-old Elizabeth closed her eyes and slumped. It was like the sound of a silent crash. For us, an eternity passed in the span of 20 minutes. Little did we know how much life could change over lunch.

It all happened between pediatric appointments, in a hospital cafeteria -- no shortage of doctors there. One would eventually tell us that our daughter had had a seizure. "She may have epilepsy. She may not. We will give her medication."

What? We hardly knew what epilepsy was. It typically runs in families. Neither of us had any such history.

The medication turned out to be a disaster of side effects and worsening conditions. Others were tried. Combinations. A special unhealthy-sounding regimen called the ketogenic diet involving high-fat consumption. We felt as if we had gone through the looking glass. But if it would help ...

The seizures became far more intense and frequent. Specialists of every sort were consulted. A degenerative disease was suspected, then ruled out. AIDS was a possibility, though we couldn't imagine how. Tests were often painful. The doctors were looking for diseases too rare and hideous to name.

Finally, a week before Christmas, the chief of pediatric neurology made a diagnosis: Lennox-Gastaut syndrome. LGS is one of the most brutal forms of epilepsy. Even specialists rarely encounter it. We learned there are 50,000 of these cases -- is that in the United States or the world? Did it matter?

Elizabeth's IQ dropped 90 points: profound retardation as a result of countless petit mal and grand mal seizures. By the time she was 4, she could no longer walk or talk. Since seizures come at night, too, sleep was by fits and starts. How exhausted we three were.

The Earth has circled the sun 23 times since that April afternoon, as we live day by day with this disabling and ultimately mysterious, overwhelmingly faith-testing syndrome. The more Elizabeth concentrates -- for example, by being read to -- the more seizures she might have. Some seizures have caused her to cry and scream. Others can make her laugh at inappropriate times.

As a 12-year-old, Elizabeth had a vagus nerve stimulator (VNS) surgically implanted. She was among the first of her age to receive it, followed by several operations since to change the battery. At the beginning, the VNS worked, giving us hope. Fourteen years later, the device has a limited positive effect.

Other more experimental treatments and medications have been tried. They only made things worse.

So many times we have asked what Elizabeth had done to deserve this fate. What would become of our little family? Could this be a cross too heavy to be ours?

We have survived these years, and the self-questioning is largely a thing of the past. Yet, after all this time, other, bigger questions remain. How did this soul, with such an extraordinary condition, find two such ordinary people as us? Why us? Why on earth?

Before Elizabeth was born, a dear friend told us that children in heaven choose their parents. We wonder.

We have received all sorts of well-intentioned advice on dealing with the strain. Moving from a school setting, at the age of 21, to day habilitation, meant finding a good program, which is difficult since there are few. As we parents are now in our 60s, there are new, challenging and painful questions regarding group homes.

The years have taught us a new way to live. Each of us has learned levels of acceptance and ways to grow.

Our faith has been tested. So has our will. They still are. Even more than most, we haven't a clue what tomorrow brings. Life follows a script that the living cannot read.

Being in a medically guarded condition forces us to confront and focus on the plotless, precious present. Elizabeth, and our expectations for her, started out one way. She has blossomed in another.

Although likely for her remaining lifetime to be nonverbal, wheelchair-bound, and completely dependent on others for all her needs, she is a beautiful young woman with the spark of life in her eyes and soul.

To us, she is the sun, the moon­ and the stars.

We could not imagine life any other way.

[Evander Lomke is director of the American Mental Health Foundation. Fotini Lomke is a special-education advocate.]

A version of this story appeared in the June 21-July 4, 2013 print issue under the headline: Behold the sun, the moon and the stars.