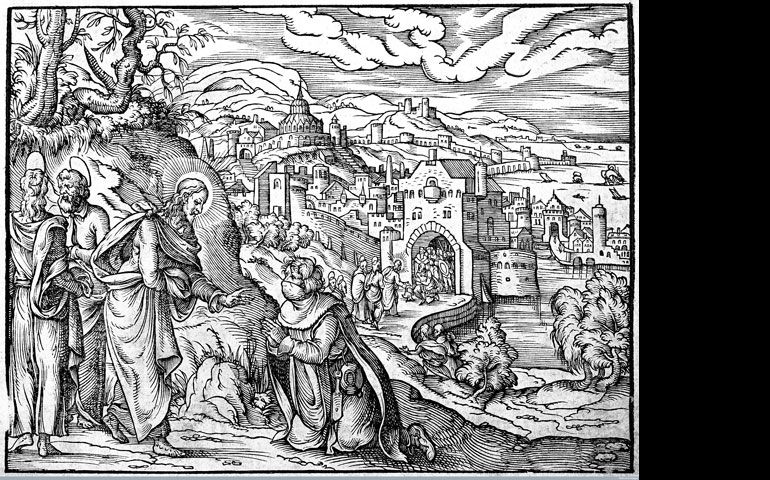 “A leper came to him and begged him on his knees, ‘If you choose, you can make me clean. Moved with compassion, Jesus touched him, and said to him ‘I do choose. Be made clean!’ ” Mark 1:40-41

Compassion, touch and starting over: This is what my soul sees when contemplating this story.

First, the compassion of Jesus. It’s odd to realize that before Jesus -- before “the Word became flesh” -- God could not feel. Even if God knew everything, being nonmaterial, he couldn’t feel anything. Since he had no bodily organs, God couldn’t actually experience that tightening of the gut, that helpless ache in the chest, that bewilderment no other species but humans can feel.

Job, overwhelmed as he was by his sufferings, could look to God and say, “Do you know what this feels like? Not just the body pain, but the betrayal?” Which leads me to wonder if -- rather than the simplistic reason of atoning for Adam and Eve -- God became human because he was interested in finding out what it is really like. Therefore, the Son of God could look down from the cross and say, “Yes, Job, yes! I do know what it feels like.”

So God felt not only his own pain but the same pain -- compassion, fellow feeling, an understanding in the gut -- that his fellow humans felt. Like this leper, like the bedeviled, like the adulterous woman, like treacherous Judas, like poor well-meaning Simon Peter. He understood, not just in his head, but in his heart where it hurts.

My soul also sees touch. This leper’s flesh was rotting, putrid. And Jesus could have cured him by simply saying the word. But he touched him. There was a skin-to-skin connection. The same thing happens when a friend is overwhelmed with sorrow. There is no way you can give them the rational answer. All you can do is put your arms around them and the touch says, “I don’t have the answer either, but you’re not alone.” Those who have trouble yielding to touch must have much lonelier lives.

Then there is starting over -- but as a different person, someone who’s gone through a life-changing, value-changing, attitude-changing experience. That’s what resurrection calls for. Not only Jesus but the disciples go through a harrowing week and come out the other end radically changed -- analogous to wounded warriors returning from many wars with post-traumatic stress disorder.

This leper has to go home after so long to people who simply haven’t had his experience -- not just of being ostracized but of being set astonishingly free. He can’t expect them to comprehend what he now knows, really knows. And out of love, both he and his loved ones have to be content to fumble their way to an understanding no textbook can offer.

And it helps that his final word was “Father, into your hands I commend my spirit.”

[William O’Malley has published many award-winning books on spirituality, most recently You’ll Never Be Younger: A Good News Spirituality for Those Over 60.]

People | God understands what it feels like to be us

Mothers of disappeared migrants plead in U.S. for help finding loved ones