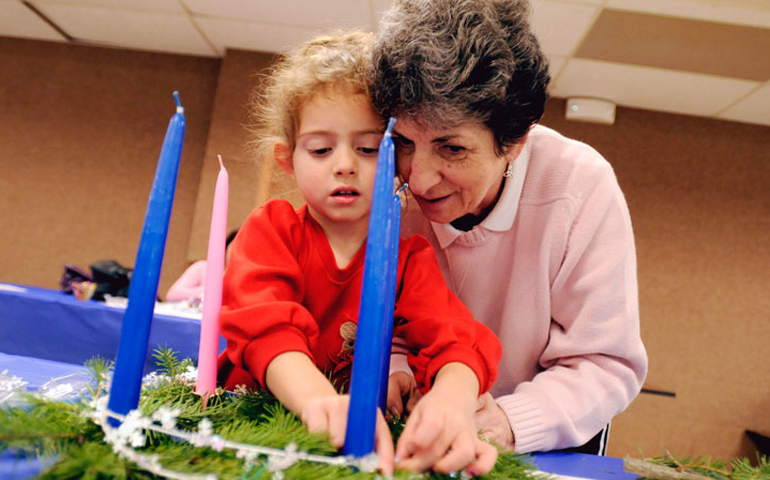 When my friend Anne also became a grandmother, we talked about what it means for the two of us. Sure, becoming a grandmother is a recognition of aging and an opportunity to be loving, but how do you grandmother in today’s world of Facebook and Twitter, occasional yearly visits from kids, divorced couples, unchurched youth and diverse family life? It’s a brave new world that invites no small amount of complications.

Anne and I sat lamenting our dead grandmothers, harkening back to being grandchildren. Our grandmothers were figures of plenty with their ample bosoms, plump, floppy arms, flour-covered hands, kitchens rich with delicious smells, full, lush smiles ever on their round faces, and when it was time for them to die, they did so quickly, gracefully, and out of our sight.

Today my grandmother would be shocked by the unladylike behavior of her grandchild embarking on her years as a grandmother. Hiking, camping outside, and water-slide parks are a part of her grandchild’s life. My grandmother would be very surprised to learn of my water-sliding abilities on the “toilet bowl plunger” ride but if pressed, she would likely laugh and say, it’s not in the least unexpected. You see, my grandmother was a lady brought up to not do such things. I was her comic relief or, possibly, as I have begun to meditate on her life more, the way of experiencing things denied to her.

Still, for all her elitist upbringing, there are lessons to learn about being a grandparent and how it can be a full return to childhood -- sanctioned and sanctified.

This hit my heart during a trip to Mackinac Island off the coast of Michigan, the film site for the movie “Somewhere in Time” starring Christopher Reeve and Jane Seymour. Walking down a street exploring the island along its eastern side, I came upon St. Anne’s Catholic Church. It is a small, well-kept, modest white-frame building that you commonly see built on islands where the handful of residents congregate between vacation seasons.

I was lucky. The doors were open that sun-filled day and as I walked into the hushed silence, I was immediately seized, transported, if you will, by the icon painted above the altar.

The background was nothing but blue, heavenly sky stretching corner to corner. In the middle -- tall, proud, erect, defiant, strong -- an elderly woman held an infant in her arms.

I recognized the position of the baby. Smiling to myself, I thought of the agony it can bring. A little agony. Just a little. Like hers, my own grandchild always wants to look outward when I am holding her in my arms. She wants to be held like that all the time -- to see what everyone else is doing at every moment on the planet. She especially likes forks, spoons and whatever any stranger is putting in their mouth as they walk past her.

Not in the least bit interested in me as a person, her adoring, love-filled grandmother; my grandchild uses my maturing body as her platform to the world. I am her elevator, her cage at times, a treehouse, step stool and convenient climbing wall. My biceps have only grown stronger in the process of holding onto her.

Sitting in the pew at St. Anne’s Church, I smile at St. Anne, the aged icon, admiring her grit.

The wide, proud smile on her face matches exactly that on her grandson’s as she holds him in her arms. The sparkle of fire in his eyes matches the slightly more tired but still alive spark in hers. The fullness of his baby body, no doubt, increased the weight on her biceps as he stretches his little hands open, reaching, to not just welcome me but to embrace the wondrous “all” of life.

She was there to provide for him; a vital part of a family unit. Her body the baby’s springboard, her thickened hands, his protection. Her face, complete with aging lines and radiant smile, tells me she is in love with it all.

Sitting there in the pew, 30 years after her death, I understood my own grandmother in a way I had never before. I remembered her loving, radiant smile given to me. She had embraced the aging costs in life because love and life are worthwhile.

And that was the kind of grandmother I wanted to be. It’s not complicated.

[Sue Stanton is a journalist and author of Great Women of Faith: Inspiration for Action. She writes from Ames, Iowa. All of the Soul Seeing columns can be read at NCRonline.org/blogs/soul-seeing.]

A version of this story appeared in the Dec 16-29, 2016 print issue under the headline: How do you grandmother in this complicated world?.