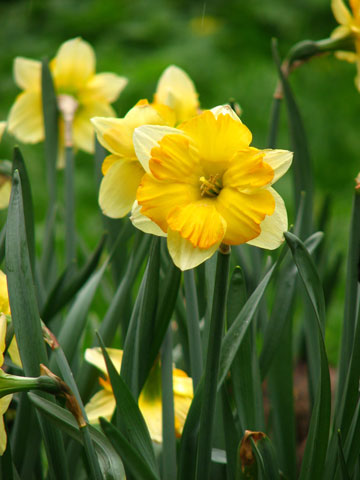 My father knew he was dying.

From his hospital bed, he looked me square in the eyes, and this now shell of a man who had once been a strapping football player -- muscular and sinewy, fast as a cheetah, with a chiseled Irish mug and thick crop of black hair that made him Kennedyesque handsome -- said to me, "Billy, make sure there are a lot of flowers at the viewing."

Why wouldn't he say that? For 50 years, my pop was the parish florist for Corpus Christi Church and School in Philadelphia. He believed -- and imbued in me -- that flowers, like sunsets, rainbows and oceans deep, were gifts from God. He was certain, without a scintilla of doubt, that flowers played a spiritual role in death, indeed, that they represented the promise of a new and purer life by softening the harsh reality of death.

Flowers, he once told me, "bloom beyond the tears, fears and no next years -- beyond life. Flowers are forever."

He had witnessed a thousand times the power of flowers when death brings on emotional stress. He saw how flowers brought spiritual warmth to what is, essentially, a temporal-cold occasion.

Countless times in his years in the flower business, the family and friends of a loved one who had died told him: "Thank you for the flowers. They meant so much to us. They were a source of strength, peace and, most of all, faith. They represented a destiny."

My pop understood the needs of his friends better than they did.

He believed -- as I still do today -- that flowers are important and essential spiritual guests at funerals, despite the fact that an overwhelming number of death notices today call for "in lieu of," which means in place of flowers consider giving the money to a charity or an educational fund for the deceased's children.

But really, in times when comfort is needed, flowers can be trusted more to provide that comfort -- golden rods never fail to blaze on hills, daffodils never come up pale, roses infinitely resonate love, and chrysanthemums promise new -- eternal -- life.

I know all this -- inherently.

You see, I worked with my pop side-by-side for 25 years in his little flower shop in a neighborhood of Philadelphia called Paradise. The accretion of memories from working with him is so sweet that I am blessed with a usable past. In difficult times, when I needed a source of strength to fill whatever holes within me need filling, I can call on those attributes of flowers: continuity, re-newness, inspiration, uplift, peace, comfort, love and, yes, spirituality.

Even a recent study done by Rutgers University revealed that flowers were not a luxury in angst-ridden and uncertain times, but an essential, comforting and blissful luxury for dealing with our emotions.

But I didn't need science to tell me that. Flowers have always spoken to me in the verities of the heart and soul: honor, truth, love.

"Strike the rock, and the water will flow from it for the people to drink." It's the same with flowers. Flowers slake both secular and spiritual thirst.

So, yes, at the time of death, flowers are as intimate as a whisper and immediate as a blush. They bring spiritual warmth; they bring a symbolic spiritual presence and meaning -- they bring a sense of transformation, not termination.

And so it was only natural -- and a law of familial legacy -- that flowers framed my father's entrance into a new and purer life.

In the funeral parlor on the day that he was to be buried, I made sure his dying request would be granted. There was a bounty of flowers: a huge spray of bulbous white chrysanthemums spread the length of the casket; baskets of white gladioli shooting out of their baskets like spires stood at the head and foot of the casket; a rosary made of roses lay inside the casket; a standing bleeding heart of red carnations and 25-30 other baskets and sprays, one after another, circled the funeral parlor like a necklace.

They were the other side of silence.

In the funeral parlor, after everyone had gone, I looked at my pop lying in the casket and put my hand on his as I scanned all the flowers surrounding him. The flowers reminded me of that triumphant connection: A newer, purer life emerges from the hush of death.

[B.G. Kelley is a writer and teacher. He has written for The New York Times and Sports Illustrated, and has authored a book of poems, The World I Feel. All Soul Seeing columns can be read at NCRonline.org/blogs/soul-seeing.]

A version of this story appeared in the May 6-19. 2016 print issue under the headline: Make sure there are a lot of flowers at the viewing.