The mystery of the rolled-away stone 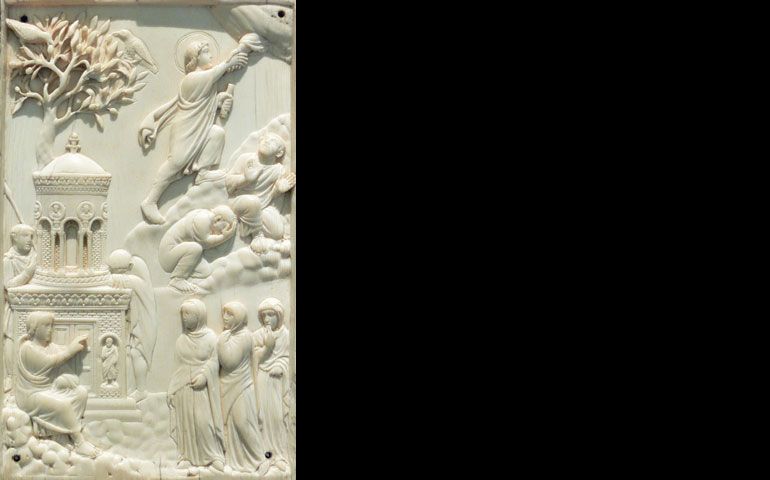 An ivory panel, carved circa 400 and today known as the “Reidersche Tafel,” depicts the women at Jesus’ tomb and the Ascension. (Wikimedia Commons/Andreas Praefcke)

Easter changed for me and changed me in 1968. Dr. Martin Luther King Jr. had been assassinated just 10 days earlier and rioting engulfed the country. My family and I were visiting my sister at the University of Bridgeport, Conn. We decided against attending midnight Mass. Too risky. So for the first time in my 20 years, I spent Easter alone with the Gospel in the solitude of my room. No lilies. No incense. No alleluias.

As I read what I thought was a familiar story, the words burned through my mind into my heart. I couldn't continue. I felt a comforting presence fill the room. It took away all fear and sadness. My heart overflowed with irrepressible joy. It dawned on me: Jesus is risen! My first impulse was to wake everybody up to share this good news. Luckily prudence won out. Cranky relatives make poor disciples. But I could not contain my joy, so I channeled it to make me a better follower of Jesus.

Every year since then, and especially now that I am a priest, after all the liturgical busyness of Holy Week, I remember that day as I take time to meditate on a Gospel account of the Resurrection. I marvel at their differences and similarities. Was it one young man who greeted the women (Mark 16:5), two men (Luke 24:4), one angel (Matthew 28:2), or two angels (John 20:12)? Was Jesus crucified the day of Passover (Matthew, Mark and Luke) or the day before Passover (John)? Skeptics point to these discrepancies as proof the stories were made up or borrowed from mythology. But if the evangelists intended to deceive, you'd think they'd have done a better job getting their "facts" straight.

Even more perplexing are two parts of the story they agree on: Mary Magdalene was the first to get to the tomb and the stone had already been rolled away. If they were simply making the story up, Mary Magdalene would be a poor choice as primary witness to the central tenet of our faith. Not only was the testimony of women not accepted, Jesus had cast seven demons out of her (Mark 16:9). Psychologists would label her delusional, if not psychotic. As if to rub our noses in this embarrassing detail, Mark places it at the beginning of his Resurrection account. Reason dictates if this detail were not true, they would not have invented it, let alone all agree on it.

But the four Gospels also share an even more curious detail: When the women arrived, the stone had already been rolled away. Why? Surely it was not to let Jesus out, as he had no problem passing through walls into locked rooms. Nor was it simply to show that the tomb was empty, as scholars suggest. After all, had the evangelists really wanted to prove the Resurrection, what better way than to have the women find the tomb still sealed with the guards still keeping watch? After much weeping and pleading, the women get their permission and help to roll the stone away. Lo and behold, Jesus is gone! (Even David Copperfield would be impressed!) The shroud neatly folded, there could have been only one logical explanation: Jesus is risen from the dead.

But the Gospel writers do not retell the Resurrection story to prove it true, but rather to invite listeners to believe. I think the stone is rolled away precisely to introduce the element of holy doubt. After all, it is faith and not certainty that saves us. Now we face plausible explanations for the empty tomb: The disciples took the body, grave robbers stole it, or the owner of the tomb removed it. The fourth explanation alone requires faith: The Lord is truly risen.

Holy Week spurs us to recall that first Easter morning dawning on a world not unlike our own. Fear, violence and death seemed everywhere then and everywhere now. Political tension and social unrest threaten our sense of security. Our country still reels from the massacre in Newtown, Conn. Yet even there, at Sandy Hook Elementary, the darkness did not overcome the light. Just like the words of Martin Luther King continue to inspire, the life and spirit of Jesus, heart by heart by heart, transforms our broken world. Alleluia!

[Maryknoll Fr. Joseph R. Veneroso is a former editor and publisher of Maryknoll magazine and Revista Maryknoll, which have won multiple awards from the Catholic Press Association, and is the author of several books, most recently Mirrors of Grace (Orbis), as well as a forthcoming novel, The Chimera, a mystery-thriller based on the Shroud of Turin.]

Spirituality | The mystery of the rolled-away stone

Grasping for signs of light: how sisters keep up their spiritual energy