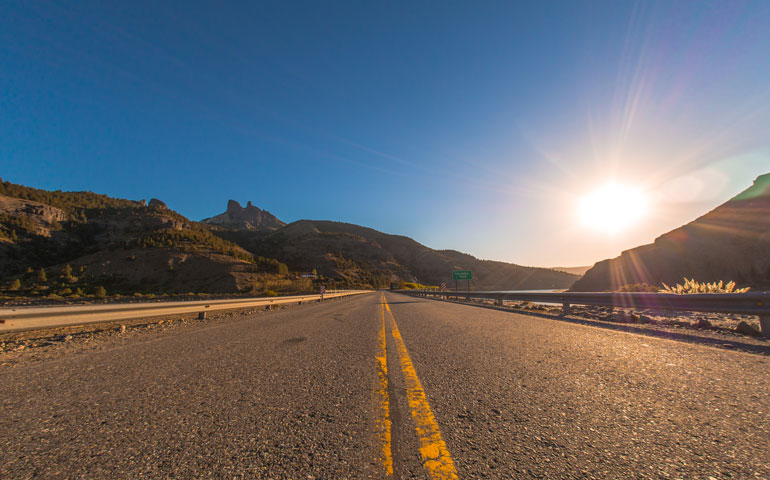 "Just can't wait to get on the road again." -- Willie Nelson

Pope Francis and Ecumenical Patriarch Bartholomew, spiritual leader of an estimated 250 million Eastern Orthodox Christians, made news this summer as they walked side by side on ancient roads in Jerusalem and Bethlehem. Many wondered if these were historic steps toward reunion after 1,000 years of separation.

It got me thinking about roads.

One could spend long hours making a list of great human achievements, from the wheel to the great cathedrals to the discovery of DNA, yet leave out one of the most important because it is too obvious, too ordinary and too ancient: the road.

Roads are the circulatory system of the human race and the original information highway. From times long before the written word, roads have linked house to house, town to town and city to city. Without roads, there are no communities. Roads not only connect towns but give birth to them. They pass beneath all borders, checkpoints and barriers, connecting not only friend to friend but foe to foe. Far older than passports, the road is an invitation to cross frontiers, urging a start to dialogue and an end to enmity. Each road gives witness to the need we have to be in touch with other.

There was a time before roads when the world was pure wilderness, but even before Adam and Eve, there would have been countless tracks and paths created by animals that moved in packs or herds, following their prey or migrating with the seasons. With the arrival of human beings, many of these pre-human pathways would have become roads for hunters, here and there providing ideal sites for encampments and villages.

Supreme collective endeavors that they are, roads reveal the cultures that made them. Roman roads tend to run as straight as Roman laws, but in many cultures, roads take many turns as they search out fords, avoid marshes, find higher ground, touch wells and pubs, and seek holy places.

Roads are life-giving. They provide the primary infrastructure of social life. Without them, there is no commerce. Without roads and the delivery systems they support, we would starve. Along with safeguarding weights and measures and the quality of beer, a primary task of kings and queens was to maintain and keep safe the highways.

Human history is the history of roads. Empires have been ranked according to the quality of their highways. Roman highways were so well built that even today, two millennia later, portions of them not only survive, but remain in use.

If roads sometimes speed armies on the path of destruction, more often, they guide pilgrims toward encounters with the sacred. They connect not only capital cities and great cathedrals, but remote churches that house the relics of saints. A saint's relics have many times caused the widening of a road or even the creation of a new one.

Roads not only take us toward each other, but when we need to be rescued from society, they lead us to solitude. The same road that leads to Rome is, in reverse and at its farthest reaches, a route to the desert.

Roads have a sacramental aspect: A road is a visible sign of a hidden unity. Roads are a map of human connectedness.

The road is a primary metaphor. In the Gospel, Christ speaks of choosing the narrow path rather than the broad highway. Early Christians called themselves "followers of the way." Maybe one could revise the translation to "followers of the road."

The road has often been a place of religious breakthroughs: Two disciples walked with the risen Christ on the road to Emmaus, unaware of who he was. Later, they took the same road back to Jerusalem, where they related how Christ revealed himself to them in the breaking of the bread.

Paul -- Christianity's first great pilgrim -- encountered Christ on the road to Damascus. Traversing the highways of the Roman Empire, Paul became one of history's great men of the road. Paul could have beat Jack Kerouac to writing a book titled "On the Road."

One of the celebrators of the road was the Oxford don, J.R.R. Tolkien, through whom an invented history of Middle Earth made its way into the modern world. Both The Hobbit and The Lord of the Rings are celebrations of roads. For Tolkien, it wasn't roads in the plural but simply the Road, singular. The core text of Tolkien's tales is Bilbo and Frodo's song that celebrates stepping out the door into the unknown without the certainty that one will ever see one's home again.

The Road goes ever on and on
Down from the door where it began.
Now far ahead the Road has gone,
And I must follow, if I can,
Pursuing it with eager feet,
Until it joins some larger way
Where many paths and errands meet.
And whither then? I cannot say.

[Jim Forest is an internationally renowned peacemaker and spiritual writer whose newest book is Loving Our Enemies: Reflections on the Hardest Commandment.]

Editor's note: We can send you an email alert every time Soul Seeing is updated. Go to this page and follow directions: Email alert sign-up.

A version of this story appeared in the Oct 10-23, 2014 print issue under the headline: A road is a visible sign of a hidden unity.