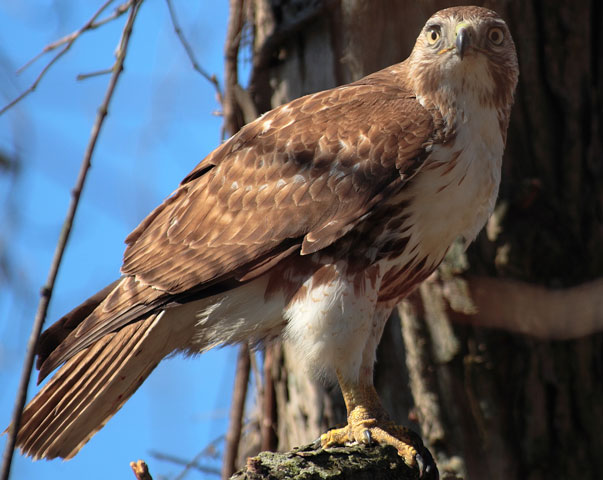 The last time I saw my brother Kevin in the flesh was three years ago, in his den, in the evening, just before summer began. We sat with our legs sprawled out and talked of hawks and love and pain and Mom and beaches and mathematics and Dad and college and his children and mine and our patient, mysterious wives and books and basketball and grace and pain and then hawks again.

We were both major, serious, intent raptor guys, delighted to try to discern the difference between, say, a kestrel and a jay, which are about the same size, although one can dismember a mouse in seconds and the other would faint dead away if dismemberment was on the syllabus.

Both of us would happily have studied hawks for the rest of our lives, but the problem was that his life was ending soon, and this was the last evening we would have to talk about love and hawks, and we knew this, so we talked about hawks and love.

In my experience, brothers don't often talk bluntly about love, even if you do love each other inarticulately and thoroughly and confusedly, because it's awkward to talk about love that's not romantic. Everyone chatters and sings and gibbers about romantic love, and how it starts and ends and waxes and wanes, but we hardly ever talk about all the other kinds of love, which include affection and respect and reverence, and also brothering, which is rough and complicated.

Brothers start out in competition and some never stop. Brothers are like trees that start out adjacent but have to grow apart to eat enough light. Brothers worship each other and break each other's noses, and adore each other and steal from each other, and detest each other even as they sprint to defend each other. It's very confusing.

If you are very lucky, you eventually get to be the same age as your brother or brothers. Eventually the differences between and among you erode and dissolve and the love is left in craggy outcrops where you can sit together with your legs sprawled out.

So we talked about love, but we used hawk words. That's what I wanted to tell you this morning. We talked about how it's awfully hard to tell sharp-shinned hawks apart from Cooper's hawks and who was Cooper anyway?

We talked about the immeasurably old war between crows and red-tailed hawks, and who started that war, and why, and sure it was about a girl, sure it was.

We talked about owls and osprey and eagles and kites and falcons and other raptors, too. But mostly we talked about hawks, because we knew hawks and saw hawks every day and had always both been addled and thrilled by hawks and we always would be, even after one of us was ashes in a stone box under an oak tree.

We talked about how often you can see better with your soul than you can with your eyes in some strange, deep, true way that I cannot explain, even though I have been trying to articulate the inarticulable for a long time. We talked about how one of us promised to stay addled and thrilled by hawks as long as he lived, so that both of us would still be delighted by hawks somehow.

So it is that now when I see a sharp-shinned hawk sliding sideways through oak branches at supersonic speed in pursuit of a flitter of waxwings, my brother Kevin sees that, too, even though the prevailing theory is that he is dead.

Often I find myself mumbling, "O my gawd did you see that?" and he mutters, "What could possibly be cooler than that?" and so somehow we are still sprawled and lucky and it is almost summer and we are talking about love.

[Brian Doyle is the editor of Portland Magazine at the University of Portland, and the author of many books, most recently How the Light Gets In and the novel Chicago.]

A version of this story appeared in the May 20-June 2, 2016 print issue under the headline: We talked about love, but we used hawk words.