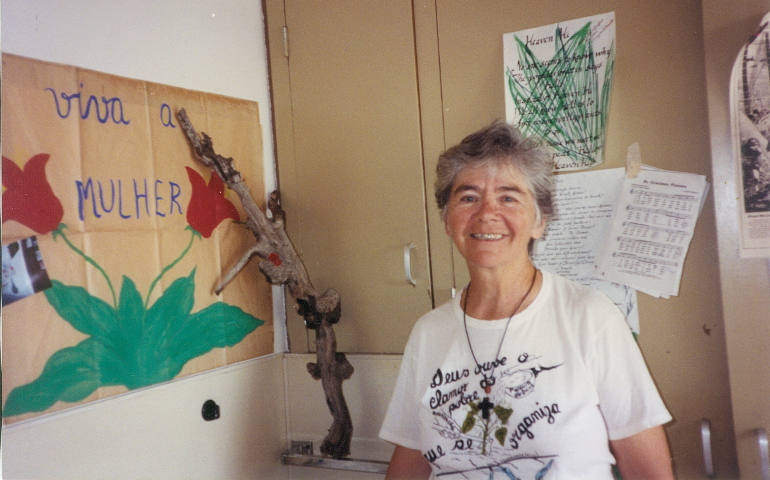 Notre Dame de Namur Sr. Dorothy Stang in her dorm room in 1992 at the Institute in Culture and Creation Spirituality at Holy Names University, in Oakland, Calif. (Sharon Abercrombie)

Notre Dame de Namur Sr. Dorothy Stang’s persistent activism on behalf of Brazil’s poor and the earth is well known to environmental and social justice activists throughout the world. Thursday marks the 10-year anniversary of her death at the hands of hired guns.

We know from her twin brothers, Dave and Tom Stang, that she would often convince female security guards to allow her to camp out on the floor of the Brazilian Ministry of Justice the night before she was due to testify at public meetings.

We know that if an official denied having received one of her letters, this delightfully outrageous Cincinnati sister would walk to the politico’s filing cabinet, and much to his embarrassment, whip out the document.

Not so well known, perhaps, is Rainforest Dot’s love for painting and dancing.

Full disclosure: Sr. Dorothy Stang and I were classmates during the 1992 winter semester at Matthew Fox’s Institute in Culture and Creation Spirituality at Holy Names University, in Oakland, Calif. Seventeen of us – most gripped by Fox’s book Original Blessing -- had abandoned our “real world” lives for a few precious months of renewal and refreshment at the institute.

We thirsted to become mystics, to allow our souls to free-fall and sink into this deeper dimension of spirituality through “art as meditation”: a practice designed to access the right side of the brain through music, writing, clay, drumming, painting and dance as doorways to the divine.

At Fox’s Monday morning classes, we drank in his stories of Hildegard of Bingen and Meister Eckhart, delighted with the saints’ assurances that the Holy One lives in every scrap of creation and how we are collaborators assigned to bring our creativity to all beings for life’s sake instead of using it for destruction, war and greed. We studied liberation theology and social justice.

It was so affirming to know that here in the safe, validating container of Room 659, we weren’t crazy after all. “Crazy” was a put-down we’d heard all too often back in the “real world” of economic madness and materialistic greed.

Each week, our latest projects emerged from our classes, taped to the walls of Durocher Hall dormitory, in the forms of original prayers, poetry and paintings.

Like the rest of us, Dot reveled in this precious downtime, grateful for the gift to just be instead of do all the time. She was already living liberation theology in the midst of life threatening situations in Anapu, Brazil.

I recall how her face lit up during our Sufi and African dance classes, how she moved in perfect rhythm to the music. Dot also plunged into painting with enthusiasm, regularly turning out depictions of the multiplicity of blooms she lived with every day in her tropical forest home.

When I stopped by her room on Valentine’s Day that year for afternoon tea and a chat, she showed me her latest painting: vivid red Amazonian Passion flowers.

Above the blooms, written in purple paint were the Portuguese words “viva a Mulher,” or “Long Live Women.” We needed to hear this. Before lunch, we had watched “The Burning Times,” an upsetting 1990 documentary that told of the persecution of women healers in Europe during the 15th-17th centuries. We were mad as hell.

The white T-shirt Dot was wearing that day displayed a Portuguese editorial inscription that further served as healing medicine for the two of us: “Deus Ouvre Clamor Pobre que se Organiza” (“God hears the cries of the poor who organize themselves”).

Their cries had followed her from the rainforest to the Holy Names campus. Although Dot’s radiant, sweet smile was a near constant, she did have her days of sadness.

During our group’s weekly Thursday morning meeting, where we decompressed and processed the feelings that were coming up from the creation spirituality institute experience, our “angel of the Amazon” would often weep. She would tell us stories of women and children, of poor farmers, of their torture and death by the military.

In those 16 weeks at Holy Names, Dot never grew accustomed to the luxury and abundance she saw everywhere in the first world. She shared how overwhelmed she was by its excesses, in contrast with the scarcity and hardship suffered by her “children” back home.

But this didn’t mean she didn’t enjoy life. Dot was a great party-thrower. That St. Patrick’s Day she hosted a rollicking fete, inviting us to her room for Irish coffees, drumming and singing.

On other days, when any of us were feeling down, we knew we could go see Dot for a cup of tea and compassionate listening.

When Dot returned to Anapu that summer, she packed her paintbrushes and paints. From then on, “she painted her prayers,” her brother Dave said.

He recalled seeing many of them hanging on the dirt walls of Dot’s home. When he returned to Brazil two weeks after his sister’s death, Dave found a particularly heart-shattering painting. The vibrant finger painting shows women dancing with joyful abandonment around a bonfire in the light of the moon and stars. It was the artistic interpretation of a real, regularly recurring event among the indigenous women.

Dave recalled one night in mid-December 2004 when he and their sister, Maggie Hohm, visited Dot in Belem, Brazil, the week. As they prepared to wind down, Dot said to her sister, “let’s go out.”

No it wasn’t, Dot replied. It was time to dance.

Women’s dance circles were a part of Dot Stang’s life there in the rainforest. It’s possible one of the last times she participated in one of those gatherings took place the night her sister Maggie went along.

Even with a price on her head, Dorothy Stang danced with joy.

May you continue to dance in the holy universe, dear one.