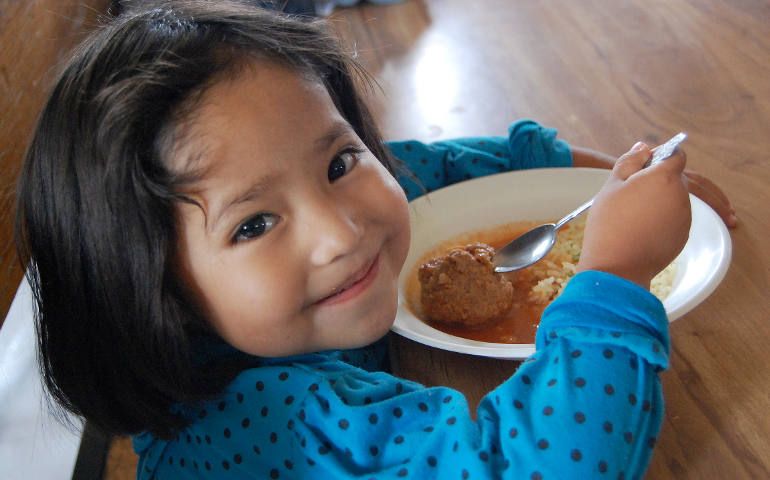 A girl in Mexico eats a meal provided by the Helping Hands Association and Caritas, the Catholic relief and development organization. Caritas Internationalis launches its campaign against hunger Tuesday with a worldwide prayer. Nearly 1 billion people -- about one in every eight -- experienced chronic hunger or undernourishment during 2010-2012, according to Caritas. (CNS photo/courtesy of Caritas Internationalis)

Vatican City — All people must stand united against the scandal of hunger while avoiding food waste and irresponsible use of the world's resources, Pope Francis said Monday.

People should "stop thinking that our daily actions do not have an impact on the lives of those who suffer from hunger firsthand," the pope said, as he launched a global campaign of prayer and action against hunger.

Organized by Caritas Internationalis, the Vatican-based federation of Catholic charities, a global "wave of prayer" was to begin at noon Tuesday on the South Pacific island of Samoa and head west across the world's time zones.

Francis offered his blessing and support for the "One Human Family, Food For All" campaign in a video message released on the eve of the global launch.

With about 1 billion people still suffering from hunger today, "we cannot look the other way and pretend this does not exist," he said in the message.

There is enough food in the world to feed everyone, Francis continued, but only "if there is the will" to respect the "God-given rights of everyone to have access to adequate food."

By sharing in Christian charity with those "who face numerous obstacles," the pope said, "we promote an authentic cooperation with the poor so that, through the fruits of their and our work, they can live a dignified life."

Francis invited all people to act "as one single human family, to give a voice to all of those who suffer silently from hunger, so that this voice becomes a roar which can shake the world."

The Caritas campaign is also a way to invite people to pay attention to their own food choices, "which often lead to waste and a poor use of the resources available to us," he said.

Caritas Internationalis invited its 164 member organizations and local churches to pray for an end to hunger and malnutrition, by acting on a local, national or global level against food waste and in favor of food access and security worldwide.

Caritas has urged Catholics to take a few moments at noon Tuesday to join the world in praying against hunger, and to engage in long-term action through raising awareness, advocacy, charitable work or other efforts supporting food security.

The right to food is part of the Universal Declaration of Human Rights, and the "Food For All" campaign’s Tuesday start-date coinciding with the United Nation's Human Rights Day.

People can contact their local Caritas organization for more information, or the campaign's main site at Food.caritas.org.