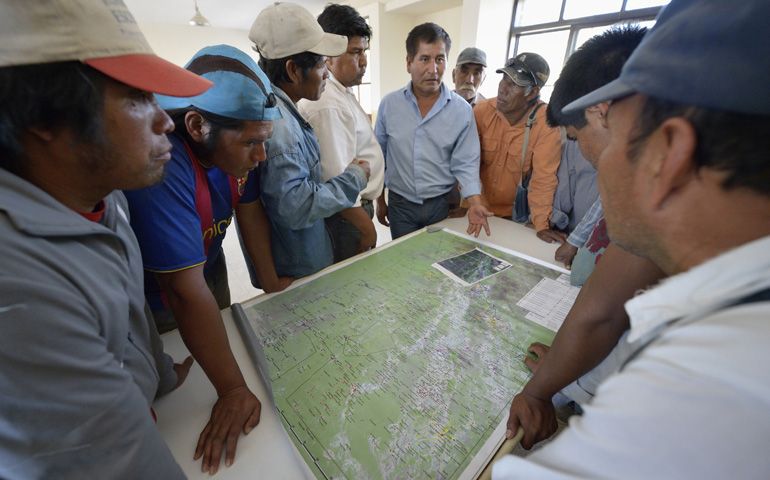 Wichi indigenous leaders in the Chaco region in northern Argentina discuss the division of land between their people and non-indigenous families living in the area during a break in a negotiating session in late August in Santa Victoria Este. (CNS/Paul Jeffrey)

Santa Victoria Este, Argentina — As the global economy pushes giant soybean fields and petroleum operations farther into previously untouched regions of South America, church activists in Argentina are standing alongside indigenous communities seeking to defend their land and culture from the destruction that such development has often entailed.

"The buzzards are circling, wanting to seize the land from those to whom it belongs," said Consolata Fr. Jose Auletta, who coordinates indigenous ministries for the diocese of Nueva Oran in northern Argentina.

"The buzzards are arriving with their agricultural projects, and they're taking over thousands of hectares of indigenous land. They have a piece of paper granting them title, so they say they can do what they want. They're doing away with the forest in the last part of Argentina that still has forest. They're destroying the lungs of Argentina's North," Auletta told Catholic News Service.

With growing international focus on deforestation in the Amazon basin to the north, foreign corporations seeking land to feed China's hunger for soybeans have come to the Chaco, a semi-arid forest that stretches across portions of Bolivia, Paraguay and Argentina. Auletta said anyone who stands up to the intruders is labeled a subversive.

"A poor person who stands up for their land and their rights, instead of being protected by the law, is criminalized, is declared guilty without a legal process. Those who stand up with firmness for their rights are considered 'invaders,' but they are only invaders of their own land," said Auletta, an Italian who has lived in Argentina for 37 years.

Oscar Villalba is a Mocovi indigenous activist in El Tabacal, where church activists have stood with native communities that have struggled for land for decades. He has been arrested several times for occupying land to which others claim legal title.

"We're not asking the government to give us land, we're asking for the return of our own land, the land which belonged to our grandparents but which the government stole from them," he told Catholic News Service.

"The white people can have all the pieces of paper they want, but that doesn't give them the right to our land. We've been here since the beginning, but today they call us invaders. It's our land. And if we can't possess it, we'll disappear. Our young will emigrate and we'll die as a people," he said.

Ever since Argentina emerged from dictatorship in the 1980s, the Catholic church has pushed hard for a variety of legal measures to guarantee indigenous land rights, but Auletta said those legal changes have only been effective when the government possessed the political will to implement them. So the church has had to immerse itself in the complicated minutiae of land struggles while also battling a public perception that the indigenous in Argentina had all died off.

"It's been a difficult process. We've been told for a long time that there were no indigenous in Argentina, and so we had to discover them anew. We've discovered them among the poor, or, more exactly, among those who have been made poor by the rich. As a church we've moved from protecting them to accompanying them, an important step for us because it means developing a respect for both their culture and their spirituality," Auletta said.

The priest said such accompaniment is a slow process but can lead to change. He points to the recent resolution of a huge land dispute in Santa Victoria Este, where decades of conflict between indigenous communities and lighter-skinned cattle ranchers often turned violent.

Known locally as "criollos," the ranchers were pushed to the region by a central government wanting to better populate its border region with Paraguay and Bolivia. They often displaced Wichi, Toba, Tapiete, Chulupi and Chorote indigenous families, many of whom are traditional hunter-gatherers. As the criollos' cattle roamed the landscape, they ate many of the wild foods on which the indigenous had long survived.

The conflict took a turn for the better in June when the provincial government agreed to a deal granting the indigenous title to 400,000 hectares of land. The criollos will get 243,000 hectares. Although some final details remain to be ironed out, many ranchers will be moving their animals and fences off land that will return to indigenous control.

The deal was brokered with accompaniment from church organizations. The indigenous had help from Asociana, an Anglican organization, and the ranchers from Fundapaz, a group founded in 1972 by Sacred Heart missionaries. The two church groups provided legal advice, logistical support, and pastoral accompaniment, even though their staffers had to occasionally leave the region for their own safety as sporadic violence broke out.

The final deal came after the Inter-American Commission on Human Rights threatened to take the Argentine government to court for failure to honor its obligations to indigenous groups.

Juan Luis Diaz, executive director of Fundapaz, said the recent agreement is a victory for both groups.

"Both sides are poor, and there are more things that unite them than divide them. Only by overcoming their differences and working together did they discover that their individual struggles for justice became easier," he said.

Diaz said the church groups had to step in and work with the two groups because the government failed to do so.

"The government's strategy for many years was to generate conflicts so that the two sides would fight each other. That slowed down considerably the search for a just solution," he said.

Rogelio Segundo, an indigenous leader in Santa Victoria Este, said the church accompaniment helped bring to the negotiating table people who otherwise had no interest in talking to each other.

"In the old days we wouldn't even talk to each other, we'd just fight. And not everyone agrees with the settlement now. There are some criollos who say they'll only leave their land if they're dead. And that's just fine with some of the indigenous. So there's still work to be done," he said.