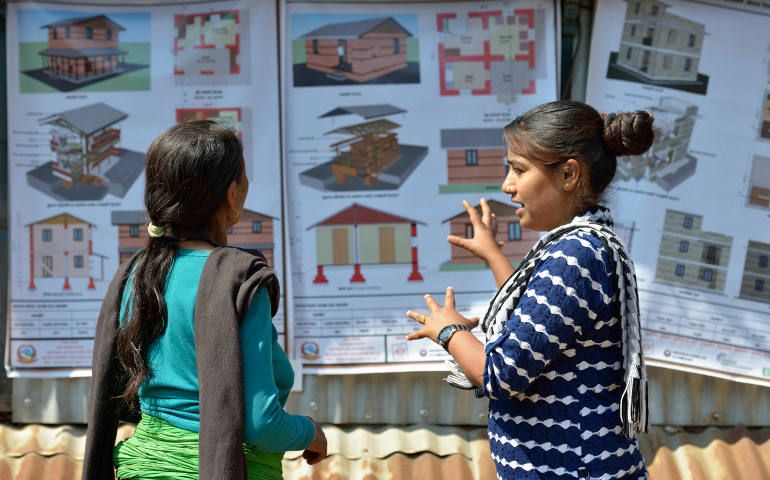 Kathmandu, Nepal — A year after an earthquake toppled them to the ground, the stones that once formed Sarita Majhi's simple house are stacked neatly in a pile, waiting to be used to once again build a house for the woman and her two small children. For now, Majhi lives in a temporary hut formed from sheets of tin roofing and a sun-bleached tarpaulin.

Her husband went off to work in Saudi Arabia before the quake, and in its aftermath told her he's not returning home to their village of Kumpur west of the capital.

So Majhi is alone, making millet beer that she sells to her neighbors, and waiting -- like just about everyone here -- on the government's promise to deliver roughly $2,000 per family to get started rebuilding. It won't pay for much, but it will help 2.5 million people get out of the flimsy shacks where they have spent the last year.

"We are all waiting for the money from the government, waiting so we can build a house, a real house. It won't be as nice as what we used to have, but it will be a real house," Majhi said.

A priest from Winnipeg, Canada, who has lived in Nepal for 39 years, said he is not as patient as most Nepalese.

"The initial response to the quake was wonderful. The United Nations and others got aid quickly to those who needed it. But then everything slowed down," Jesuit Fr. Bill Robins told Catholic News Service.

"People spent the monsoon season in their temporary shelters, and when it quit raining, we should have started building houses. The government had lots of money promised to it, but they created so much red tape, supposedly to protect the money from the corrupt, that nothing has been accomplished. I'm really angry. Here we are, almost one year on, and the government is sitting on money it could use to begin rebuilding," he said.

"When are we going to raise a little hell with the government? People need housing. They went through a monsoon season, then a cold winter, and now another monsoon season is about to begin. The storms that are coming will send their tin shacks flying."

More from Global Sisters Report: "Religious communities in Nepal shift to earthquake relief" (May 1, 2015); "Sister steps up efforts to send water filters to Nepal" (May 4, 2015); "In Nepal, Catholics reach out to remote areas devastated by quake" (May 8, 2015)

Within weeks of the April 25 magnitude 7.8 earthquake that killed about 9,000 people, international donors pledged $4.1 billion toward reconstruction. But political and ethnic feuding paralyzed the government, which was working to finalize a new constitution. As the document finally took shape, Nepalese living along the border with India, unhappy about its content, blockaded fuel and other vital supplies from reaching the mountainous nation. The economy, and any hope of rebuilding in a timely manner, ground almost to a halt.

The government finally overcame political deadlock and appointed Sushil Gyewali as chief executive officer of the National Reconstruction Authority in December. The civil engineer had a good reputation for results, yet his first major act was to announce a contest for the agency's logo. The promised payments for house construction were once again delayed, and many survivors worry that if they start building on their own, they will lose their eligibility for government assistance.

"People with money can get loans and rebuild, but the poor who have no money or collateral are stuck," Robins said. "If I wasn't a Jesuit who took a vow of poverty, I'd open a bank account and transfer money from outside into the account, keeping it away from the government and NGOs, and I'd take that money and get some houses built. By the time someone in authority figures out what's happening, a few months will have passed, but I will have a lot of houses built. What are they going to do to me? I'm an old guy. The worst is that they could throw me out. That's OK. I've been here a long time."

Lorraine Bramwell, Catholic Relief Services country representative in Nepal, explained that part of the delay has been getting the pieces in place for the government housing grants to be used effectively. CRS is one of several NGOs that is training masons in seismic-resistant building techniques. To be eligible for government grants, homeowners must use builders certified in such training programs, and choose one of several government-approved home designs.

"We're training people how to build houses that won't fall down the moment the earth shakes again," Bramwell said. "And we're making sure that the homeowners understand the basics of construction, so they can better monitor the work of the masons they hire."

Bramwell said she shares people's frustration with the slow pace of reconstruction.

"I would love to go in and give people money and just fix things. But it never works that way. There are always problems. It's difficult personally to see people suffering and know that things could have happened faster. But we have to focus on what can be done. We're helping to keep things moving with all we've done, and the government does seem determined to get things moving with the grants," she said.

"We want it to be simple, and people get frustrated with the complexities. But it takes years to recover from a disaster of this magnitude. Look how long people worked to recover from Katrina," Bramwell said.

One religious leader here said the disaster and its aftermath have eroded people's confidence in the government.

"The government has totally failed to adequately respond and the people are really frustrated. Sitting in their tents waiting for the monsoon, they've lost faith in the government, the political parties, and the whole political process," said K.B. Rokaya, former general secretary of the National Council of Churches of Nepal.

Yet Rokaya, now president of the Nepal Intellectual Forum, says the earthquake has helped break down walls of class and caste that hamper progress.

"The earthquake really brought people together. The people in the high-rises came down and huddled in the streets inside the same tents with the common people, people from the lower castes, all of them eating the same noodles out of the same pot," Rokaya said.

"This gave new awareness to upper class people that you could become zero in no time. It created a new respect for the workers. Sometimes you think that you have a big car and a wall around your nice house and thus don't need anything. But the quake broke down all the walls in Kathmandu and everywhere. The people could never see in the palace before, but the walls fall down and people can now see in. What effect is that going to have in the future?"