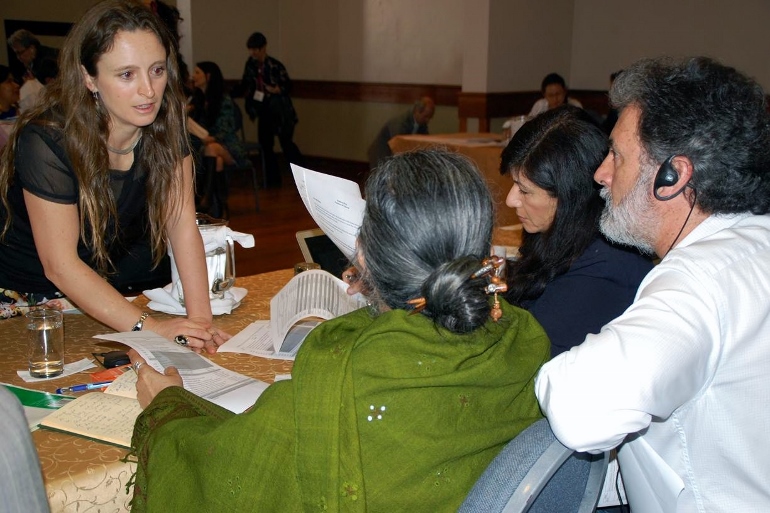 Natalia Greene, director of Fundación Pachamama, which was shut down in December by the Ecuadoran government for its protests against oil drilling in the Amazon and violation of the rights of indigenous peoples, consults with Vandana Shiva, Atossa Soltani and Cormac Cullinan moments before the start of the World Tribunal on Rights of Nature. (Elise D. García)

The snow fell steadily through the night and into the morning, adding another 5 or 6 inches to the layers blanketing the ground from earlier snowfalls. At our house -- just outside the city limits of Adrian, Mich., and 3 miles from the motherhouse of the Adrian Dominican Sisters -- we can hear the clang and hum of three oil rigs, drilling 24/7, breaking the winter stillness of our neighborhood where the few remaining cornfields amid suburban houses are rapidly becoming oil fields.

This is the stark reality that leaders of the Rights of Nature movement, who met at a global summit Jan. 13-17 in Ecuador, are up against as they returned home to face the tar sands of Alberta, Canada; megaton coal extraction near Australia's Great Barrier Reef; genetic manipulation of India's seeds; fracking in shale basins around the United States; copper mining and oil extraction in the richly biodiverse rainforests of the Amazon; and other threats to life in Africa, Europe and South America.

It is the stark reality I faced, having been sent to the summit by the leadership of my congregation to see how we as a community, and perhaps other religious, might engage in this movement in our struggle against ecological ruination.

"Even as we address concrete situations in various parts of the world, we need to remain focused on the big picture," urged renowned environmental leader and Indian physicist Vandana Shiva toward the end of the summit. "This movement is about transitioning from killing economies to living economies."

"It's about changing the dream, the vision of what it means to live well," said Cormac Cullinan, South African lawyer and author of the seminal Wild Law (2002), which articulates a path to a new structure of governance that recognizes Rights of Nature.

"It is a movement with a powerful spiritual dimension," says Adrian Dominican Sr. Pat Siemen, OP, who has led the effort to introduce the idea of Rights of Nature in U.S. law schools -- the belly of the beast -- through the establishment in 2006 of the nation's first Center for Earth Jurisprudence at Barry University School of Law.

But how to infuse this larger, dream-changing, spiritual concept into human consciousness around the planet?

That challenge absorbed much discussion. By the end of the summit, leaders of the Global Alliance for Rights of Nature had outlined a number of steps, including the establishment of a permanent World Tribunal on Rights of Nature and a week of global acts of Satyagraha -- nonviolent resistance -- beginning Oct. 2, Mahatma Gandhi's birthday, to draw attention to the ravaging of the planet.

Another key commitment the leaders made was to sow the concept among ecological, social justice, faith-based, farming, and other organizations throughout the world concerned about the wellbeing of the community of life on Earth.

Like the "butterfly effect" in chaos theory, where the air disturbance caused by a butterfly's wings in one part of the world could cause a hurricane elsewhere, the Rights of Nature concept -- a limited disturbance to the status quo -- could have the capacity to change whole systems.

Making resonant connections is key to stimulating the amplifying effect.

For people of faith in the Christian tradition, a resonant connection to the ethic of Rights of Nature is available through the mystics and their sense of the natural world.

"Mystics and theologians like Thomas Aquinas recognized creation as a sacred revelation of God -- as God's primordial Scripture," Siemen says. "Over the centuries, we have lost that sense of the sacred, but it is being reclaimed, especially among women religious."

Through the teachings of the late Passionist Fr. Thomas Berry and the instrumental work of Caldwell Dominican Sr. Miriam Therese MacGillis, women religious throughout the United States and elsewhere have embraced the mystics' reverence for nature and care of creation as a constituent part of their peace and justice work.

"Rights of Nature language may not yet be widely known or adopted among Catholics," Siemen said, "but it's a natural for Catholic sisters, who could play a powerful role in advancing this movement."

And so could women throughout the world, said Osprey Orielle Lake of the Women's Earth and Climate Caucus.

"Between 60 to 80 percent of all food production in the world is done by women," Lake said. "Who's been saving and caring for seeds? Women."

When it comes to water issues, studies by the United Nations repeatedly show that if women aren't involved, those solutions won't work, according to Lake. Further, she noted, 80 percent of all consumer purchases in the United States are decided by women, impacting both our economy and planet.

"Women are a key constituency for the Rights of Nature movement," Lake said. And women are among its major proponents.

A partial listing points to the number of women leading organizations (also often founded by them) that make up the Global Alliance, which itself is directed by a woman, Robin Milam. Some other women-run organizations include:

Affirming the pivotal role of women to the success of the movement, Cullinan quoted an African proverb: "When women are in charge, even the rivers can flow uphill."

The challenge ahead, both in terms of the magnitude of the problem and the speed with which it must be overcome, might well be akin to having a river flow uphill.

On the last day of the summit, when the facts of multiple crimes and violence against Earth were presented at the tribunal, the most potentially catastrophic -- and the biggest ticking time bomb -- was global warming.

As Pablo Solón, former Bolivian ambassador to the United Nations, made clear, two-thirds of all proven fossil fuels need to remain in the ground if we are to limit global warming to no more than a 3.6-degree increase in average temperature. We are already experiencing recurring record-breaking typhoons, droughts, floods, and fires at less than half that outer limit (1.44 degrees), which the international community agrees should not be exceeded.

On our present course, the world is slated to go well beyond that do-not-cross line to a 6.48-degree increase by mid-century, more than three times the present increase. The time may seem distant; it is not. Today's first-graders will be in their mid-30s, striving to raise young families in a very changed landscape.

"The talks in Paris next year are our last chance to change this catastrophic trajectory," Solón said. If recent climate change talks are any indicator, the outcome is not promising.

In A Sleep of Prisoners, the poet Christopher Fry hints at an answer, for Dominicans and all humanity, when he writes:

Thank God our time is now when wrong
Comes up to face us everywhere,
Never to leave us till we take
The longest stride of soul we ever took.
Affairs are now soul size.

[Adrian Dominican Sr. Elise D. García, is the former co-director of Santuario Sisterfarm, an ecology center in the Texas Hill Country dedicated to cultivating cultural and biological diversity. She attended the Global Rights of Nature summit and wrote about it for NCR last month.]