Turkson to talk to both sides in GMO debate 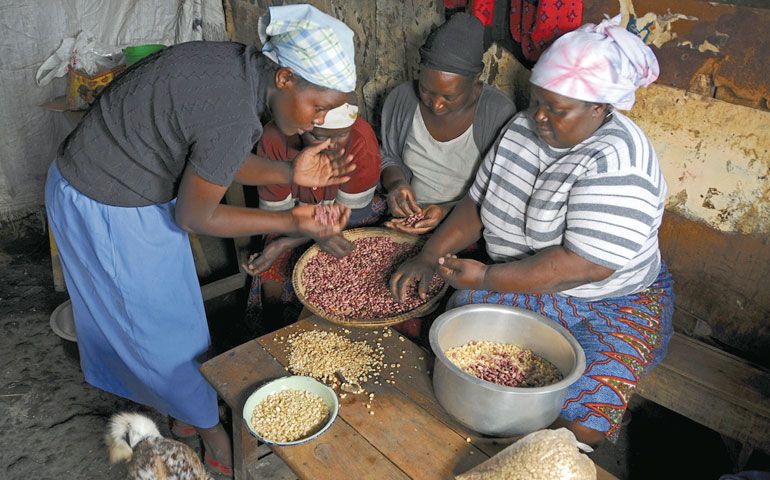 Women sort beans and maize kernels in a house in Mukuru, a slum in Nairobi, Kenya, in 2012. (AP Images/Corbis/Wendy Stone)

Ghana's Cardinal Peter Turkson is in the middle of a genetically modified food fight, but he's determined not to let it get messy.

Turkson will be in Des Moines, Iowa, Oct. 17 to speak at the 2013 World Food Prize conference, in which three innovators of genetically modified organisms will be honored. The day before, though, he also will appear at an event hosted by the Occupy the World Food Prize campaign, which was created to oppose the use of GMOs.

Turkson, president of the Pontifical Council for Justice and Peace, told NCR that he and the rest of the council believe he could do the most good by accepting both invitations to speak, despite the opposing messages coming out of the two events.

"We decided that we would respond to both of them to show that both of them need to be listened to," he said. "We didn't want to take sides."

He said he is trying to look at the issue of GMOs through a spiritual lens.

"I am not opposed to science and research, and I'm not opposed to improving the life of the human person," Turkson said in a Sept. 3 interview. "The benefits of science are for us, that's why God asked Adam to take care of the earth."

"But if science and research make it difficult for people to do just what is basic for their sustenance, then we would probably call for gratuitatis," Turkson emphasized, referring to Pope Benedict XVI's third encyclical, Caritas in Veritate.

Benedict called for more gratuitatis, or selfless giving, in our global society. He wrote, "Economic, social and political development, if it is to be authentically human, needs to make room for the principle of gratuitousness [in Latin, gratuitatis] as an expression of fraternity."

The World Food Prize was established in 1987 to honor that level of giving. Often referred to as the "Nobel Prize of Agriculture," it honors people whose work has "advanced human development by improving the quality, quantity or availability of food in the world."

This year, however, many are questioning the three winners' altruism.

The three laureates, who will receive and share a $250,000 award, view biotechnology as a gift that will solve world hunger.

"It is gratifying that our work ... has now found worldwide application in agriculture with the promise of benefitting all mankind," Chilton said June 19 at the World Food Prize Announcement Ceremony.

A group of Iowan activists created the Occupy the World Food Prize campaign in 2012, saying they fear that rather than honoring gratuitatis, the prize is being awarded gratuitously to agro-industry supporters. According to a Mother Jones analysis of the World Food Prize Foundation's tax records, 28 percent of donations to the foundation in 2009-2011 came from agricultural business, including Monsanto and Syngenta. Among the top donors listed in the Mother Jones report are the Gates Foundation and the Rockefeller Foundation, which together created the pro-GMO charity Alliance for a Green Revolution in Africa.

A flier Cordaro created depicts a black solidarity fist holding an ear of corn and a carrot next to the words, "GMO Crops Breed a New Form of Slavery -- Cardinal Peter Turkson." This comes from a January 2011 article in the Vatican's daily newspaper that quoted Turkson as saying that economic dependence on agribusiness is emerging as "a new form of slavery."

When asked about this quote, Turkson said, "It was probably derived from the fact that I said if poor farmers have to buy every seed that they plant then it limits their ability and freedom to plant and grow food."

"Certainly research has gone into the production of the GMO seeds ... and research costs money," Turkson said. "But  that does not mean that if GMOs seeds turn out [to be] what people have to use, and if you don't have money to buy them then you can't grow food, then, I think, we would be in a worse position than we are in now."

While growing up in Ghana, the cardinal watched his mother struggle to support him and his nine siblings.

"The community we grew up in was a mining community," he said. "There wasn't that much room for any gardening ... My mother went and bought vegetables from bigger markets and brought them to our local market to trade."

"If the possibility of sowing an acre, if the possibility of producing crops depends on seeds that need to be purchased, a seed that needs to be prepared and made available, if something happens to this process and one could not buy the seeds, or it became difficult for the seeds to reach the farmers, there would suddenly be a difficulty.

"That's a caution I want to sound. If all types of farming got reduced to sowing and using GMO seeds ... in some remote communities where this is not possible, if this was all that was available, then there would suddenly be a difficulty."

In an email to NCR, Kenneth Quinn, president of the World Food Prize Foundation, wrote, "As someone who stood on the hill at Living History Farm outside Des Moines in October 1979 to hear Pope John Paul [II] deliver his powerful message on sustainability and feeding the millions who are starving, I was thrilled when Cardinal Turkson accepted our invitation to come to Iowa to continue the dialogue that we must have about the great challenge we face in providing adequate food for all 9 billion people who will be on our planet by the year 2050."

Turkson agreed that solving world hunger "is most important in the long term, because we are thinking about the concern of feeding the world's population, which has been with us for a while."

"And what are the programs for dealing with this? To just encourage a lot of genetically modified seeds? ... Is that a problem or not? It's what we still need to look at," he said.

The cardinal likened the issue of GMOs in underdeveloped countries to problems that emerged as corporations from industrialized nations tried to solve the HIV/AIDS epidemic.

"Although antiretroviral drugs were brought in as a solution, and everybody knew that if people had access to them a lot of people would survive, it wasn't just possible to have the drugs everywhere and whenever you needed them -- the drugs cost money," he said.

Duke Tagoe, of the grassroots organization Food Sovereignty Ghana, echoed the cardinal. "Whoever controls the seed controls the entire food chain," he wrote on the organization's website. "These seeds are not owned by any African entity, they are owned by American companies."

No matter where Turkson stands on the issue, though, he said he still plans to "listen to all and see how we can make a very sympathetic presentation of the issue that would be acceptable to both sides."

"We are not, by saying this, that we can reconcile ... both sides of the divide," Turkson said. "But we think that if people are stuck to their position, then it means they are convinced that there is something worth listening to. I think, therefore, that we should encourage both sides to listen to each other."

With this tactic, the cardinal may prevent a crossfire of organic and GMO tomatoes at October's events. Until then, he may want to pack a raincoat -- just in case.

World | Turkson to talk to both sides in GMO debate