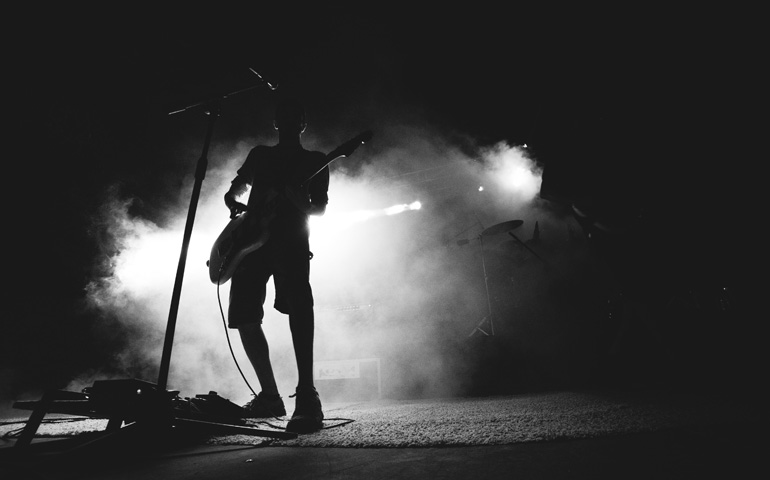 This past week, my wife Genevieve and I time traveled back to before parenthood and went to two different outdoor rock concerts, catching five acts in all. Due to anticipated thunderstorms that never materialized, one of the bands didn't take the stage until 10:15 Friday night, which is in the neighborhood of our typical bedtime. We're still dragging. But the bodily fatigue was worth it, because these shows were the most spiritually energizing experiences I've had in a long time. The formula is reliable: a warm summer evening plus incredibly talented artists plus huge crowds cheering plus time with spouse and friends equals a good chance to encounter the Holy Spirit.

At the Friday show, my favorite moment came at the end of the band Wilco's set. Lead singer and songwriter Jeff Tweedy has said that concerts for him are what he's always thought church should be like, and he so clearly treasures the communal nature of the rock show when he's on stage. One Wilco ritual that feels church-inspired is the crowd sing-along, which often happens organically during their most famous songs. But on Friday, during the band's long, noisy, grooving tune called "Spiders (Kidsmoke)," Tweedy noticed that some people up front were singing "buh buh, buhduh" syllables along with a wordless, descending guitar riff that repeats a bunch of times in the closing section of the song. He smiled and waved off all the players on stage except for the drummer, who kept the beat going, and encouraged us to keep singing. The tune spread throughout the pavilion, and even Wilco neophytes could jump in because there weren't any lyrics to know. We sang this little four-bar riff over and over until Tweedy finally brought the band back in to finish the song. It was cathartic and thrilling.

Three nights later, we saw the band Fleet Foxes, which sings beautiful, layered folk- and gospel-inspired songs in multipart harmony. Lead singer Robin Pecknold sung a couple of songs solo, just him and his guitar, and the spine-tingling power of his voice filled every inch of the massive venue. Walking out after the show, I remarked to my friend that Pecknold seems to be divinely inspired, a conduit for channeling the incredible gift God has given him. In other words, as Baroque composer Johann Sebastian Bach is said to have put it, "I play the notes as they are written, but it is God who makes the music."

The easy comparisons my theologically-bent mind sometimes makes — "rock concerts are just like Mass!" — are facile and not quite right. The tangible elements of congregation, beauty and song match up, but liturgy is about a community's worshipful response to a God who loves us first. What's going on under the surface at Mass — the invisible force of Christ's love that brings us together and sends us out into the world — is far more important than the surface-level similarities liturgies and rock shows share. But that's not to say there isn't great spiritual value in the rock show.

At a talk I went to a few years ago, theologian Thomas Groome talked about "Big-S Sacraments" – the Church's set of seven – and "small-s sacraments," or those experiences of God communicating to us in everyday moments like a glowing sunset, a great conversation or a beautiful song. Often, he said, if we are spending time intentionally noticing God coming to us in the small-s sacraments outside of church, then we develop a disposition that's more open to the grace of Big-S Sacraments. If God is able to communicate his goodness to me through the beauty of a song, then it doesn't seem so outlandish that he'd also come to me in the forms of bread and wine. In my own life these days, I've been feeling spiritually rusted out and disconnected from God and the church. The key is to let the transcendent experiences I've had this week point me toward God as opposed to letting them sub in for God.

C.S. Lewis, a great lover of the arts himself, wrote about this temptation to substitute in a sermon called The Weight of Glory. "The books or the music in which we thought the beauty was located will betray us if we trust to them; it was not in them, it only came through them, and what came through them was longing," he writes. These things "are good images of what we really desire; but if they are mistaken for the thing itself they turn into dumb idols, breaking the hearts of their worshipers. For they are not the thing itself; they are only the scent of a flower we have not found, the echo of a tune we have not heard, news from a country we have never yet visited."

The real fruits of these rock shows won't be known for a while, well after Wilco's and Fleet Foxes' tours are over. Will they have been one-shot cultural immersion experiences that fade away into memory and fail to satisfy my longing? Or could they turn out to be tastes of the divine that renew my faith and help me grow into a holier, more joyful person, even on those unexciting evenings without tickets to a killer show?