I saw what the church can be, during a huge parish hall party 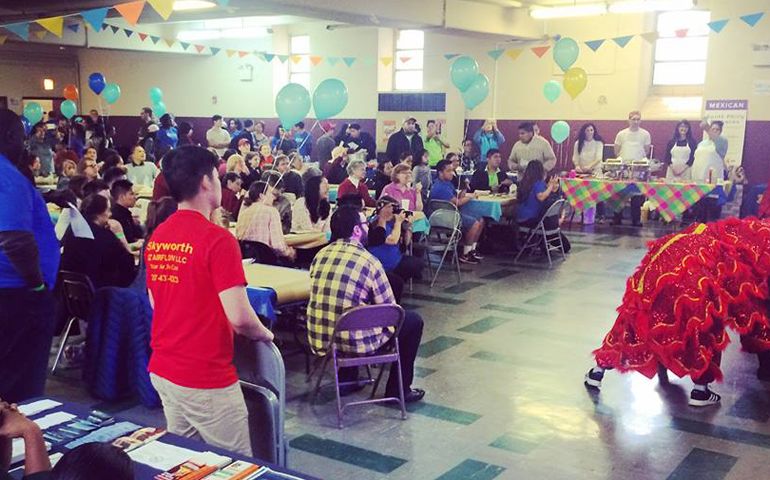 On a lazy afternoon recently, I Googled "countries of Africa quiz" and found a nice and simple one. A green, unmarked map of the continent filled the screen, and I was instructed to click on a particular country. Get it right and the country would snap from green to white.

There are 50 countries on the quiz, and my first time through it, I got all 50 right. One hundred percent, an easy A+, in just over two minutes.

How did I do it? Had my obsessive childhood viewing of the PBS geography game show "Where in the World is Carmen Sandiego?" paid off? No, not at all. I cheated. Blatantly.

See, I had opened up another Chrome browser tab next to the quiz and pulled up a labeled map of Africa. So when the quiz told me to click on Angola, it didn't take long to toggle to the other tab, find Angola, return to the quiz, and get the answer right.

I told myself this method would help me learn the map faster. But, truthfully, I did it because I didn't want to see how badly I'd do on my own.

After a few days of practice, with the map drilled into my mind thanks to a combination of rote memorization and weird mnemonics (Mali's shape sort of reminded me of Maine, and they both start with "M-A,"), I thought back to my first effort and tried to figure out just how poorly I would've done without cheating. Out of Africa's 50 countries on the map, I listed the ones I had confidently known before my studying. I came up with seven at best. That's 14 percent: an unequivocal, pitiful F.

As a fourth- or fifth-generation American from the proudly self-centered Northeast, my global knowledge is embarrassingly lacking. I usually skip past international news stories when they pop up online or on the radio. Those oceans to our east and west that keep us well protected from aggressors can also keep us isolated from the culture and politics of most other places. Despite the information-age ability to read about and watch protests in Egypt or an election in the Philippines in real time, they just feel so far away.

I'm not sure why I wanted to start addressing my global deficiencies by memorizing maps -- maybe the Trivial Pursuit-style game of it appealed to me -- but I'm absolutely hooked. I followed up Africa with Europe and Asia, and I put in a few minutes a day to make sure I stay in good shape. My ears perk up now when I hear the name of a country whose shape and location I have learned.

This past Saturday, I was describing my new hobby to a friend at a big multicultural celebration at St. Thomas Aquinas Catholic Church in South Philadelphia. (He and I serve on the board of directors of Aquinas Center, a nonprofit housed in the parish's former convent, and the event was a fundraiser for us.) The parish is one of the most diverse in the city, a vibrant community made up of Indonesian, Vietnamese, Latino, Filipino, African-American, East African, and older and younger white Anglo sub-communities.

My friend and I were standing in the church parking lot before the event started, close to a long-time Vietnamese St. Thomas parishioner. I didn't know the parishioner, but my friend did, so he brought him into the conversation. "So, Mike, can you find Vietnam on the map now?" he teased, gently.

"Oh, yes, well, it has that distinctive shape," I said. "It's right there next to Cambodia and Laos."

"And China," the parishioner said.

Suddenly, I felt a bit silly. I realized while speaking to this man who had come the United States seeking refuge from war and oppression that, despite my new little trick, I still really know nothing about the world.

The event included an awards ceremony in the middle of the afternoon, and the first prize was given to a leader of the parish's Vietnamese community named Chinh Dinh. Chinh is a volunteer English as a second language teacher at Aquinas Center, decades after learning English as an adult himself. He is a helpful presence not just for Vietnamese speakers, but for natives of all the 14 different countries that were represented in the center's most recent class. Chinh's ministry is just one example of how the parish's Vietnamese community has welcomed more recent newcomers to America: former refugees themselves extending hospitality to those seeking a better life from all over the globe.

A bit later on, an Indonesian dance company called Modero performed, divided into a group of women and a group of girls, some as young as six or seven. As I stood to the side of the stage and admired their artistry and grace, my friend Bethany, the director of Aquinas Center, whispered to me that the group was made up of both Christians and Muslims, reflecting their mother country's various religious traditions. I looked out over the packed hall, the most diverse parish room I've ever been in, and whispered back, "This is what the church can be."

The U.S. Catholic bishops reported in 2014 that about 33 percent of all parishes in the country are shared by culturally diverse communities, up from 22 percent in the year 2000. Places like St. Thomas Aquinas represent the very near future of the American Catholic church -- if we're lucky. How have they overcome boundaries to build unity in the midst of incredible diversity? There aren't any silver bullets, but St. Thomas is home to strong leadership from each of the parish's sub-communities, culturally responsive liturgical and pastoral life (six Masses in four languages per weekend, for instance), and lots and lots of shared meals.

My online map studying piqued my global interest, and with just perfect timing, the event on Saturday incarnated that interest. I left the parish excited for the church and eager to learn more about the world. I'm not sure what my next step will be, but I know it will take more time for relationship building than one afternoon provides. Real global citizenship -- or what you could even call global discipleship -- cannot be haphazard or superficial. The world is more connected than ever, but during this election season in particular, it also feels more tribal than ever. It will take a lot of hard work to realize Jesus's dream in John 17:21 that "they may all be one."

Parish | I saw what the church can be, during a huge parish hall party