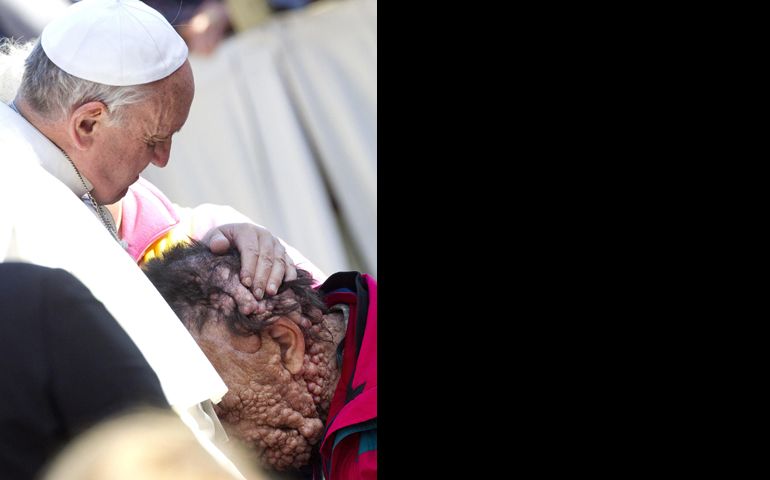 Pope Francis embraces Vinicio Riva, 53, during his Nov. 6, 2013, general audience in St. Peter's Square at the Vatican. Riva, who is afflicted with neurofibromatosis, said receiving the pope's embrace was like being in paradise. (CNS/EPA/Claudio Peri)

Today in Rome, a eucharistic procession for the feast of Corpus Christi will wind its way from the Basilica of St. John Lateran to the Basilica of St. Mary Major. On Sunday, Catholics here in the United States will celebrate this solemnity that's about the ways we can encounter God in the world -- specifically in the Eucharist, of course, but also in the other sacraments, in Scripture, in the created universe, and in the community.

That word, "encounter," is one of Pope Francis' favorites, popping up often in his public addresses and used 32 times in his apostolic exhortation, The Joy of the Gospel. He talks about encounter as an antidote to our "throwaway culture," in which people who are seen as useless are cast aside: the unborn, the elderly, immigrants, the poor. If we encounter Christ in those people who are usually marginalized and get to know them, then we won't be able to throw them away. You don't ignore and neglect a friend.

I use "encounter" all the time when introducing Catholic social teaching to parish and school groups. It seems to hook people with an accessibility and emphasis on relationship that other terms like "human dignity," "solidarity and subsidiarity," "call to participation," and "preferential option" lack. I talk about these essential concepts, too, but using encounter first lets people start with a person instead of with an encyclical or a bullet-point list of teachings.

Following Pope Francis' lead, we Catholics should develop a "theology of encounter." The term is too rich, and the current "Pope Francis moment" is too big, to miss this opportunity. So here is a call for professional theologians to think and write about encounter, for ordained and lay ministers to create and share pastoral initiatives around encounter, and for the rest of the faithful to talk about and practice encounter in our daily lives. I think a robust "theology of encounter" might be a key to helping Catholic social teaching finally shed its sad tagline as the "best-kept secret" of the church.

For my own first contribution to the conversation, here are five quick thoughts inspired by one of Scripture's finest examples of encounter: the parable of the good Samaritan.

In the parable, the two religious leaders notice the beaten man, but they pass him by on the other side of the road as if they were horses with blinders on. The Samaritan traveler, however, "[comes] near" the victim after he saw him. He moves toward the suffering, not away from it. Also, the fact the hero of the parable is a Samaritan would have challenged Jesus' audience, as Samaritans and Jews were enemies. Perhaps in our own time, this story could be about the "good radical Islamist." The Samaritan does not let man-made social boundaries prevent him from extending mercy.

I have a list of a few friends I start with when I need a late-night ride home from the airport. There are some people who are so generous that they really don't care about being inconvenienced. Too often, I am not one of those people. The Samaritan had somewhere to be, but he takes a significant detour that costs him time and money. I get the feeling he was the type of guy who did this sort of thing all the time, whenever he saw someone hurting. Encounter means putting our own wants aside when we see the needs of another.

The Samaritan sizes up the situation and responds accordingly. He notices the traveler's wounds and bandages them. He realizes the man won't be able to walk, so he puts him on the Samaritan's own animal. He recognizes that the severity of the beating will require longer-term care than he can provide, so he brings the man to an inn. Attentive learning from those affected by a social ill is a necessary step to address the problem. Asking questions and listening is best, which wasn't possible in the case of the unconscious traveler.

To make sure the traveler was cared for well, the Samaritan invites and empowers the innkeeper to participate in the work of compassion. He gets others involved. Also, he promises to return on his return trip. Encounter is not a one-time, feel-good moment, but a series of faithful responses over and over and over again.

Martin Luther King Jr. said it best: "On the one hand we are called to play the Good Samaritan on life's roadside, but that will be only an initial act," he told a crowd at Riverside Church in 1967. "One day we must come to see that the whole Jericho Road must be transformed so that men and women will not be constantly beaten and robbed as they make their journey on life's highway. True compassion is more than flinging a coin to a beggar. It comes to see than an edifice which produces beggars needs restructuring." As we get to know those who have been beaten down, we are called to work to change the social, economic, and cultural systems that are oppressing them.

My call for a theology of encounter would be incomplete without the words of our indefatigable Holy Father himself: "When you meet those most in need, your heart will begin to grow bigger, bigger and bigger! Because reaching out multiplies our capacity to love. An encounter with others makes our heart bigger. Take courage!"

Spirituality | It's time for a theology of encounter