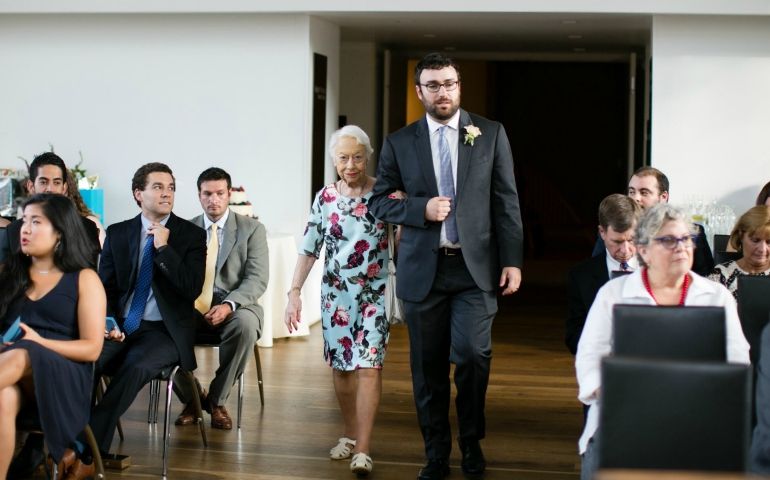 My Jewish grandmother, Mina Yohalem Laskey, died last month at 91. She was smart and cultured and opinionated and, having lived as a widow for more than 40 years, one of the strongest people I've known. I don't think she intended to help ensure I grew up to be a committed Roman Catholic — as in, theology grad school committed, career in ministry committed, pictures and quotes of saints on my toddler daughter's bedroom wall committed — but I wouldn't be writing here without her influence. A funny thing happened when she put openhearted love and support of her family ahead of everything else.

On a July afternoon 10 days after I was born, Mina hosted my baptism party at the house where she and my grandfather had raised my dad and his brother. The house was chosen for the party because it wasn't far from the university chapel where a monsignor would initiate me into the Catholic Church by pouring water on my tiny head and anointing me priest, prophet and king.

The monsignor, who had grown up Jewish himself and had counseled my dad and Catholic mom a little before their marriage, warned everyone: You can sort of do an interfaith wedding, but you really can't do an interfaith baptism.

To which my grandmother replied: So what? She never missed a party and always welcomed everyone. It was her rule, after all, that the Passover Seder she hosted each spring had to include a guest who hadn't been to a Seder before. Of course she would host this celebration.

My mom told me about my baptism day often when I was a kid. It was a big moment in our family's interreligious experiment. There hadn't been any Jews in my mom's family or Christians in my dad's until their marriage. That had been new enough. Now, what do you do about the kids? The plan was to raise me and whomever else followed Catholic and teach us to love Judaism.

There could've been tension on both sides. And so Grandma's enthusiastic hosting of the party made a statement: Familial love would be stronger than religious difference. This commitment never wavered. Between my two younger siblings and me, there were three baptisms, three first Communions and three Confirmations. Grandma was there for all nine.

Reminiscing about her with other family members since her death, I realized that as Mina's family grew to be more and more diverse through the years, filled with people of different religions, races and sexual orientations, she never stopped welcoming and supporting. She remained close with her late husband's relatives decades after his death.

The love I felt was felt by so many others, too. And it was so natural — I never felt out of place with her because I didn't share her faith. Hospitality is just what she did. I remember being surprised as a kid to learn that Jews and Catholics have a tumultuous past, marred by anti-Semitic persecution and violence. That history was so far from my experience of mutuality and understanding.

In more recent years, Grandma came to a few different talks I gave as the Catholic speaker at events sponsored by the regional Catholic-Jewish Commission, including one about engaging youth in religion. I told my own story of growing in faith as a kid, starting with the baptism party, and then talking about powerful community service trips with my Catholic youth group. I shared how Grandma's Seders taught me how Judaism shares with Catholicism a special commitment to the poor and vulnerable inspired by the way God led his chosen people out of slavery in Egypt, and how both traditions' commitment to social justice had led me to my career.

It was such a joy to see her in the audience, sitting next to a couple friends she had brought along with her, beaming at me with pride. I felt so affirmed in my faith and vocation, right where I was supposed to be.

There's a concept in Judaism called tikkun olam, which literally means "repair of the world." Social activism in the pursuit of justice is certainly an element of tikkun olam, and Grandma did plenty of that in her life as president of both her local school board and League of Women Voters chapter. But I think her biggest contribution to the healing of the world was in the way she loved all those who found themselves part of her family, transcending divides that too often divide people. We would all do well to imitate her example.

Your thoughts on invalid formula for baptisms

Locating the ‘glocal’ in baptism