As a new dad, I feel for doubting Thomas 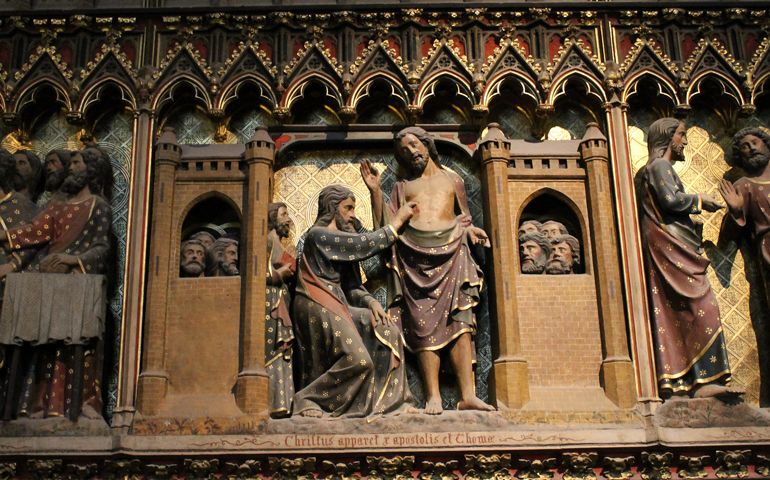 A few months ago, our infant daughter developed a fixation on the large, brightly colored crucifix from El Salvador that hangs on her bedroom wall. Whenever she caught sight of it, she would break into this robust, guttural laugh. It worked every time. Even if she was in a fussy mood, my wife or I could just hold her up in front of the cross, and she'd crack up instantly.

One night soon after this phenomenon started, she woke up crying around 3 a.m. I padded down the hallway to her room, bleary-eyed. Night lights seem to keep her awake, so her bedroom is the darkest room in the house. I felt my way around the crib until I found her, scooped her up and fell into our rocking chair, which is opposite the wall where the crucifix hangs. She sat on my lap facing outward and tilted her head up toward the spot where the cross is. And she started to chortle, louder than ever, really letting it rip, pausing only to breathe. There's no way she could have seen the crucifix -- there wasn't even a shadow. I just shook my head and laughed along with her.

I thought of this moment during Mass last Sunday, when the doubting Thomas passage from John's Gospel was proclaimed. After missing out on Jesus' first post-resurrection appearance to his apostles, Thomas wants to see and touch Christ, who does indeed return and gives the doubter a gently chastising lecture: "Jesus said to him, 'Have you come to believe because you have seen me? Blessed are those who have not seen and have believed.' "

Our daughter's laughter in the dark -- her own version of believing without seeing -- changed the way I heard the Gospel this time around. Fatherhood alters my perspective like this all the time. I find so many connections everywhere: After Mass, for instance, I caught myself revisiting two different homilies I heard about this Gospel passage in college a decade ago, relating them to life as a dad today. (Unfortunately, I couldn't tell you anything about the homily this past Sunday, as our daughter spent that part of Mass distracting me by seeing how much of her hand she could fit in my mouth.)

The first homily was given by Fr. Joe, a delightful, persistently joyful old priest. We were on a team leading a retreat together, and he was preparing to preside at Mass for the retreatants. A few minutes before Mass began, he excitedly told me that he had realized something new about the passage, which he was going to talk about in his homily: Thomas got in trouble because he had been away from the apostles when the risen Christ first appeared to them. The story is, among other things, a cautionary tale about disconnection from the community of faith.

There have been countless blessings in new parenthood, but closeness with the community of faith has not been one of them. If we're lucky, nap and meal times line up nicely with the Mass schedule, and we're able to all go together. Just as often, though, my wife and I take shifts, and I usually end up leaving after Communion to get back home. And we'd love to be involved in parish life beyond Mass, but evening activities just don't jibe with our daughter's 7 p.m. bedtime.

I think of my own previous experience as a parish staff member in two different communities. I led activities and programs for elementary, middle and high school-aged youth; post-college, childless young adults; parents of older kids who could stay home alone or had moved out of the house; and even whole families with children who were in kindergarten and up.

Who didn't I work with? Families that included infants and toddlers. I assumed they were too overwhelmed and busy to be involved, and there's definitely some truth in that. Traditional pastoral ministry activities might not be what's needed for young families. But there has to be some way these families can be connected to the community of faith -- maybe a home visit from a mentor couple, a card for a baby's 1st birthday made by a religious education student, or a 30-minute Google Hangout set up for parents to chat with each other about the upcoming week's Mass readings. There aren't easy answers, but I do feel some empathy for the St. Thomas that Fr. Joe imagined.

The second homily about this passage I remember hearing in college was given by Fr. Lou, one of my favorite priests at school. He defended Thomas and said Catholics are a lot like him: We want to grab hold of Christ, to encounter him with our five senses. The sacraments, physical signs of an invisible God, emerge from this desire. I think of the way many Latino Catholics say señor mío y dios mío ("my Lord and my God") during the elevation of the Eucharist after the consecration, quoting Thomas as they lay eyes on the Body of Christ.

I think about bodies differently since our daughter was born -- and really since the last few months of growth in the womb. That a couple of microscopic cells could multiply and multiply and turn into something as big and solid as our daughter is an utter miracle to watch. "Solid" is the word I think of when I hold her. I pat her on the back and the sound reverberates in her chest. She grabs my beard and glasses with vise-like strength. I can feel her bones, muscles and baby fat. The miracle of the Word becoming flesh is echoed in the miracle of our daughter and every person. Of course Thomas wanted to grab hold of the person he loved the most.

Reflecting on Scripture in light of fatherhood is a reminder that God meets us wherever we are. The limitless depth of the good news means that it remains fresh and relevant in each season of life. I wonder what Thomas will have for me next time.

Spirituality | As a new dad, I feel for doubting Thomas

At Easter the stones of sin, despair, are rolled away, pope says at vigil