Viral video has some good advice - and some bad advice, too 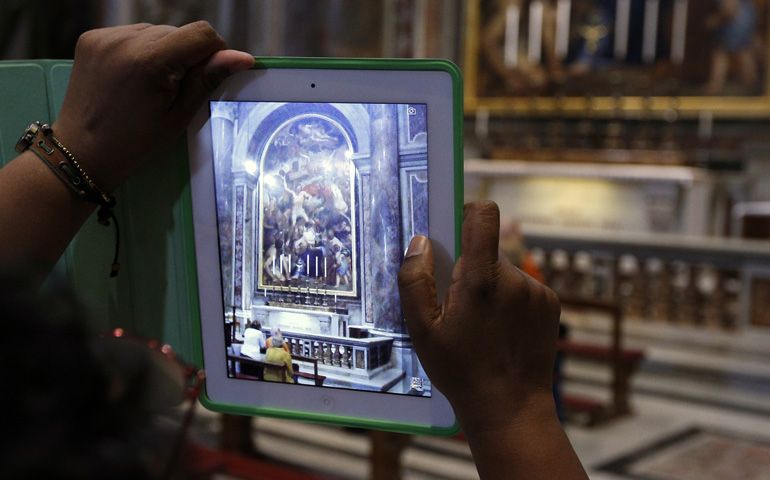 A visitor uses an iPad to take a photo of the tomb of St. John Paul II in September in St. Peter's Basilica at the Vatican. (CNS/Paul Haring)

Editor's note: Mike Jordan Laskey is a new Young Voices columnist. He is the director of Life & Justice Ministries for the diocese of Camden, N.J. Jordan Laskey completed a master's degree in theology from the University of Notre Dame through the university's Echo: Faith Formation Leadership Program, and he has a bachelor's degree in English, also from Notre Dame. He lives with his wife, Genevieve, in Haddon Township, N.J., and blogs for the Camden diocese at camdenlifejustice.wordpress.com.

Over the weekend, seven of my Facebook friends shared a new YouTube video called "Look Up," a spoken-word poem criticizing our fixation on technology and social media that is going viral, ironically, thanks to social media.

In the poem, a British writer named Gary Turk argues: "This media we call social is anything but/When we open our computers and it's our doors we shut." Social media interaction continues to replace face-to-face contact, Turk says, and it's a dehumanizing and isolating substitution.

In the second half of the video, Turk imagines the decadeslong romantic relationship that begins because a 20-something guy asks a woman for directions instead of searching for them on his phone. "Just one real connection is all it can take/To show you the difference that being there can make," he says. "So look up from your phones, shut down those displays."

Why is "Look Up" rocketing around the Web? Besides its good production values, sentimental charm, catchy rhythm and celebrity endorsements, the poem resonates because it can be so difficult in the digital age to find things like authentic companionship or even some old-fashioned, disconnected peace and quiet.

I get caught up in the virtual world and distracted from what's in front of me all the time. Since I started this column just a few paragraphs ago, I have refreshed Twitter a dozen times and friended three people I'll probably never see again on Facebook. Sometimes, in the middle of a conversation with my wife, I will pull my phone out of my pocket without realizing it and open an app randomly. "Why did you just take your phone out?" she has asked. "Um, I don't know." One of my favorite, most relaxing days in recent memory was an afternoon at the beach when I actually turned the darn thing off.

So Turk aptly notices a problem and prescribes a solution. But the poem's puritanical streak doesn't leave room for all the good things technology and social media offer. In a Catholic worldview, no tool is inherently bad. It's all about prudence, not wholesale rejection.

Last week on Skype, I watched as 3,000 miles away, my 11-month-old niece took some of her very first steps. I have access to more information in two seconds than my great-grandparents had in their lifetimes. A lot of the best spiritual reading and watching I have done has been online.

Turk's "real world good, virtual world bad" dualism is most harmful in the poem's love story. It's cute, but underneath the romance is a sort of threat: "Single people, put your phone away or you might miss out on the chance of a lifetime."

I'm imagining a single-and-looking person watching the video and rolling his eyes. "Oh, if I just talked to more strangers on the street, I would've been married by now. Why didn't anyone tell me before this?"

Finding the right person is often really hard in any era. (In this wonderful TED Talk, journalist Amy Webb crunches the numbers and says that in her city of 1.5 million people, there are probably only 35 people who would fit even her most basic criteria for a mate.)

Not only is this fairy-tale love story Pollyannaish and emotionally manipulative, but by including it in his screed against social media, Turk unconsciously belittles the practice of online dating, a much more promising romantic strategy than street-corner conversation and one that really does not need any new derision.

While the stigma of weirdness or desperation that characterized the early days of online dating is steadily decreasing, an informal poll of some friends points out that talking about the practice still often includes some "gentle shame" or a "one-percent feeling of apology."

But this embarrassment is misplaced. More than a third of new marriages in the U.S. start online, and these marriages are, on average, happier than new marriages that started on the sidewalk or any other place. Online dating isn't perfect, but it's helping a lot of people make real-world connections they otherwise would have missed.

Virtual interaction isn't a substitute for in-the-flesh companionship, but it doesn't have to be one or the other. If my phone is a tool that I use in moderation to spark or grow relationships, broaden my knowledge about the world, and deepen my faith, I am using it well. If it interrupts dinner conversation because I'm scrolling through Twitter, I am not using it well.

Prudent use of technology takes practice, and the process of building good digital habits is definitely not going to inspire a viral spoken-word video anytime soon. But the unsexiness of moderation should not dissuade us from working at it. Resist the allure of the poem's simple, either/or world. Live in the both/and.

Culture | Viral video has some good advice - and some bad advice, too