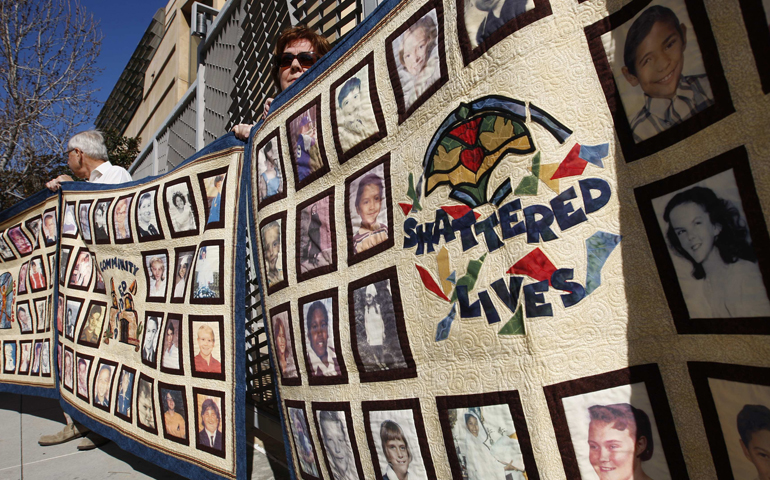 People stand outside the Cathedral of Our Lady of the Angels Feb. 1, 2011, holding quilts bearing photos of victims of sexual abuse by priests of the Los Angeles archdiocese. (CNS/David McNew, Reuters)

During my youth, I passed through the heavy doors of St. Theresa Parish hundreds of times after Mass. While most of those memories have vanished into an amalgam of childhood impressions, I do recall a specific encounter one Sunday with Fr. George Bredemann. My mother chatted with him as we three children stood near. I recall him looking down at us and me feeling uncomfortable. Mostly, I remember his eyes.

It was only years later that I learned he was one of the most notorious of the priests who abused children in my home diocese of Phoenix, Arizona. Fr. George was eventually arrested, convicted, and jailed. Justice did not arrive because our bishop, Thomas O'Brien, stood with the survivors; in fact, he wrote a letter to the court asking for leniency in Fr. George's sentencing. Justice was served because a Catholic parishioner saw what was happening and took action.

Currently, little is being done to hold bishops accountable when it comes to their negligence in handling abuse cases. So it should be no surprise that U.S. Catholics across generations gave Pope Francis only a 54 percent approval rating of "excellent" or "good" when asked how they would evaluate his performance in addressing the sex abuse crisis.

While Catholics gave Pope Francis better marks than his predecessor, he still falls short when you compare his 54 percent approval rating on sex abuse with his 81 percent rating at "spreading Catholic faith."

Catholics of all ages know that it is past time for bishops to be held accountable for the cover-up, but the Vatican has only forced a handful of bishops to resign. Of most concern, however, are those bishops that remain undisciplined or new bishops who have the potential to cover up abuse in the future. Who will stop them?

Earlier this month Pope Francis issued a motu proprio that clarifies existing church law regarding the removal of bishops. While bishops have always been subject to appointment or removal by the pope, this new law specifies that a bishop's negligence over sex abuse cases in the church could lead to his removal from office.

I would like to think that the Vatican's recently clarified policy would prompt immediate action when it is implemented in September, but based on the Pope's track record, I am skeptical that it will be universally enforced. Pope Francis might have mercy on those outside the church, but when it comes to those who have suffered abuse within, he has shown limited mercy.

Instead of immediately removing Bishop Robert Finn of the St. Joseph-Kansas City diocese after his conviction for failing to report suspected abuse, two years passed before the Vatican announced that they had accepted his resignation. Meanwhile, Pope Francis ignored the pleas of Chilean Catholics who want him to remove a bishop accused of covering up abuse.

From calling abuse survivors and their allies "dumb" to supporting children's corporeal punishment, the pope has a long way to go before he can be considered a child advocate, let alone a leader who holds his officials accountable for their crimes.

Without someone to hold them accountable, most guilty bishops remain or die in office. While the United States Conference of Catholic Bishops' Charter for the Protection of Children and Young People calls for "fraternal correction" between bishops, there is no documented case of its use that has led to a guilty bishop's removal. Even the USCCB's own annual abuse audit has no teeth to hold its members accountable. In fact, bishops are permitted to refuse receipt of a "Management Letter," that contains the auditors' recommendations. Additionally, those bishops who opt to receive such letters are not held accountable to follow through on the recommendations that would further safeguard children in their dioceses.

In the latest annual report, the auditors noted, "Thirteen bishops requested not to receive Management Letters upon completion of this year's audit." Furthermore, the auditors "noted a significant number of dioceses and eparchies that did not implement certain recommendations" that were provided during the last on-site visit.

Who will hold these bishops accountable? It waits to be seen if the Vatican's new clarified policy will be universally enforced and to what degree come September. Meanwhile, my hope rests in everyday Catholics: those who care about the church and want to ensure our faith's children are protected, not just from pedophiles, but from the bishops who enable them.

It was due to one woman that a pedophile from my youth, Fr. George Bredemann, was kept from harming more children. Thanks to thousands of survivors and allies like her, more church officials are being held accountable for their crimes. Additionally, it is Catholics who advocate for structural change, like those at this weekend's SNAP Conference or the folks at Bishop Accountability, who are forcing church officials over time to create a culture of accountability. Until the Vatican removes all bishops who are responsible for covering up abuse, it will remain the task of Catholics to keep working for structural change to make it so.

It was the look in Fr. George's eyes that I remember most as a child. If this epidemic of abuse is ever to end, it is up to us adults to look right back: to watch, report, and ensure that every bishop who puts a child at risk is held accountable for his crime.