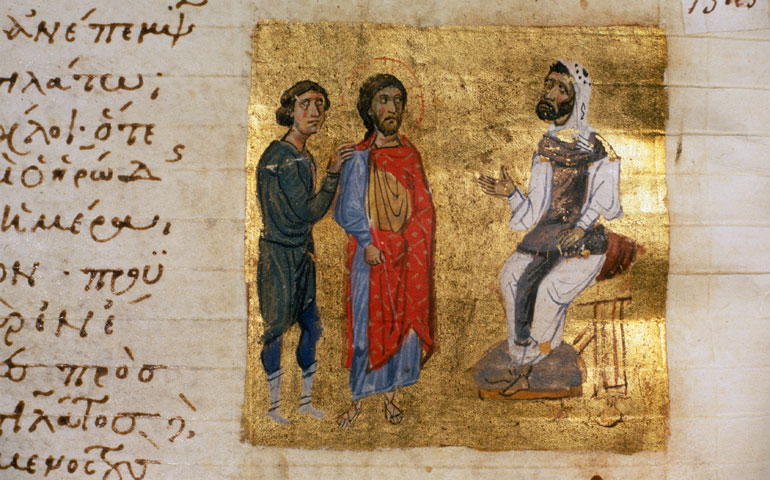 Say you are 81, a well-known and respected priest, theologian and author of 35 books on contemporary spirituality. You have devoted the past 50 years to guiding others in spiritual awakening and to courageous grappling with the big questions about the meaning of life, the big answers proposed by the Bible and the deep wisdom traditions of both your own Catholic faith and of other world religions, the science and humanities.

You think you may have one final book in you, even as your eyesight, hearing, short-term memory and other bodily systems fail and an aggressive arthritis attacks every joint, disrupting your sleep and making each waking hour a reminder that no one escapes old age. Even if you once thought a good sense of humor and a lifetime of good habits would get you some golden years, aging has befallen you like an escape-proof prison.

If you are Fr. Ed Hays, sage of the Kansas prairie and all of the above, you want to write this book because real maturity poses hard questions and the struggle to find answers may help free 21st-century Christians and others to encounter a God much bigger than current religion or theology can hold.

Your final book will address some of these hard questions, the conundrums and paradoxes that are often left hanging or smoothed over in most spiritual writing. For example, the notion of a loving God sending his own son to die by crucifixion to pay the price for human sin. Or how the cross became the linchpin of Catholic theology, in the West at least, making suffering and heroic self-sacrifice something pleasing to God. Or, if we step back far enough, how this exclusively Christian story concerns the 5 billion people on Earth who are not Christians and how it squares within the unfolding drama of a vast 14 billion-year-old universe.

Well, the book now exists and is called Pilate's Prisoner. Written and self-published in 2012, Hays calls it "historical fiction," in which he has taken "creative liberty with many details to enhance the reader's experience." Hays presents it in the form of a "Passion Play," a suitable vehicle for his purpose. It begins with the recorded events of Good Friday and the trial of Jesus, but then has Pontius Pilate arrange by an elaborate ruse to only pretend to crucify Jesus and instead spirit him out of Jerusalem to the maritime fortress on the Mediterranean coast for further questioning. In altering the expected events, Pilate frustrates Jesus' own conviction that he was meant to die on the cross on Passover in order to atone for the sins of the world, as ordained by God and foretold in the Hebrew Scriptures. By departing from the Gospel narrative, Hays effectively slows down the familiar story so the reader can examine its basic assumptions about God, Jesus, prophecy and the plan for salvation.

During their dialogues over the next 20 months, Pilate and Jesus discuss eternal and universal questions about the meaning of life and the fact of death. Pilate is plausibly rendered from general historical conjecture as a quasi-religious, cultured, secular pragmatist hardened by military experience and Roman politics. Jesus, about whom we know even less historically except through the hagiography of the New Testament, is portrayed as a true believer who is understandably distraught at having the biblical script changed so abruptly and totally.

In one of many details Hays takes creative liberty with, Jesus begins in deflating and frustrating captivity to experience the aging process as he nears 40 at a time when average life expectancy was around 30. The "crucifixion" he desires is inflicted in bouts of joint pain, sleeplessness and other ailments common to the elderly. His physical suffering is intensified by long periods of isolation in his prison cell and the feeling he has utterly failed to complete his mission.

This radical twist to the story casts Jesus into the common lot of aging and decline most modern believers will experience, making his "Passion Play" autobiographical for Hays and other seniors, whose ordinary sufferings are then united to Jesus' redemptive surrender to natural death. God is likewise freed from the sadistic role of scapegoating an innocent and beloved son on a cross to satisfy the demands of divine justice offended by human sin. Jesus ponders his existence not as unique hero but instead in union with all fellow humans confronted by a mysterious universe where life is a gift defined by how fully and gratefully we live it instead of by our eagerness to escape it or offer it up to please God and get to heaven.

This deconstruction of the core of Christian doctrine may prove too provocative for many readers, but for those who know Hays, such creative turning of the original to find new angles of entry will be familiar. All of his books over the years have invited readers to play with assumptions and language that keep us from exploring our own religious traditions and beliefs once they are codified. A consistent message in his work is that the mystery is always deeper than the doctrine and questions always outlive the answers. Pilate's Prisoner is a fresh, bold look at old truths reimagined and encountered.

[Pat Marrin is editor of Celebration, NCR's worship resource, which will publish Fr. Hays' essay "Aging and the Paschal Mystery" in its November 2012 issue.]

A version of this story appeared in the Dec 7-20, 2012 print issue under the headline: Kansas sage reimagines old truths.