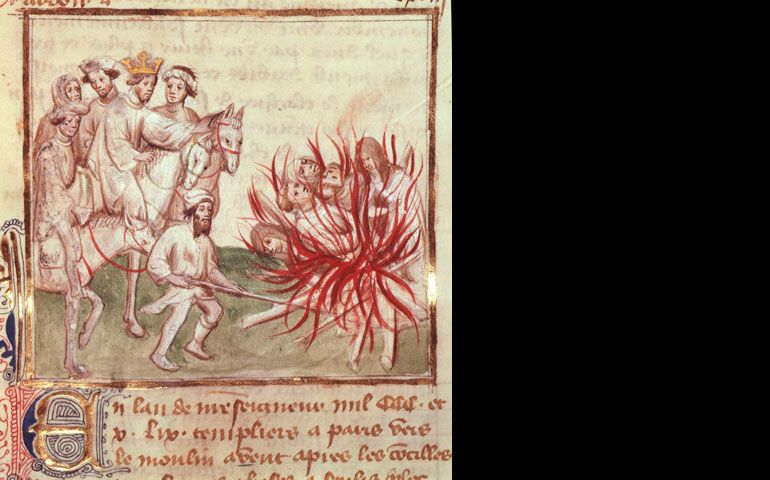 In the early 14th century, Templars accused of sodomy and heresy are burned alive under the eye of French King Philip IV, in an illumination from the 15th-century Grandes Chroniques de France. (Newscom/British Library/akg-images)

THE WAR ON HERESY
By R.I. Moore
Published by Harvard University Press, $35

Long ago and far away, in lands now known as Southern France and Northern Italy, many people the church considered “bad” lived in small villages scattered throughout the countryside. They were known by various names -- Cathars, Waldensians, Manichees, Albigensians and Donatists. What they had in common was that their ideas were seen as wrong, a threat to the unity of Christian Europe.

They therefore had to be snuffed out.

This was in the 11th, 12th and 13th centuries. Their offense was heresy -- to believe or express an idea contrary to what was taught by the Roman Catholic church, and to refuse to “correct” that “wrong” idea. To refuse was to be tried, convicted and killed -- usually burned alive at the stake in the town square as an example to those who might insist on having ideas of their own.

All this was by order of the church. The popes, who had already sent crusaders to the Holy Land to reclaim Jerusalem, would periodically send a local crusade to Southern France.

But that was more than 800 years ago, and nothing like that could happen today. Is that clear?

Well, it’s only partly clear to historian R.I. Moore, professor emeritus of medieval history at Newcastle University in England. Moore’s challenge in The War on Heresy is to make these events clear to the reader -- a tough order.

Most of what we know about what happened in these centuries of constant purges comes from the 13th-century inquisitors themselves, who saw their interests -- political, territorial and economic -- threatened by the spread of “unorthodox” ideas. It is no stretch of the imagination to apply this medieval “jurisprudence” to waterboarding, extraordinary rendition and even Abu Ghraib.

The 11th- to 13th-century inquisitors used rising religious diversity as a pretext to seize the property and establish local kingdoms under custodians loyal to the church. But how does one recognize a heretic?

Those holding these positions were the persons to be reported to the inquisitors. Once convicted, their lives might be spared if they informed on all their co-believers and changed their beliefs.

Moore contends the perceived “enemies” of the domestic crusaders were in many ways, in spite of their erroneous ideas, better Christians than the popes, bishops and military who arrested and tortured them, burned their homes and towns, and slaughtered them by the thousands. For example, for the “heretics,” the major sins were simony and concubinage, and the clergy were the big offenders.

For the reader, more than 200 years pass as popes and emperors die, and Raymond V of Toulouse gives way to Raymond VI and Raymond VII. The First Lateran Council gives way to the Second, Third and Fourth. Religious orders of Cistercians give way to Dominicans and Franciscans -- and through it all the 21st-century reader has little sense of its development. The slaughter -- today we might call it genocide -- continues.

Moore is no Barbara Tuchman.

Pope Innocent III is described as a charming man with dynamic vision, who also “had a loftier conception of the powers of his office than any pope since Gregory VII.” But for the most part popes and kings come onto and off the pages unfleshed by physical descriptions or colorful profiles. The book’s clout is in the description of bloody crimes and punishments portrayed in the original documents.

When Raymond VI of Toulouse is slow to pursue local heretics, the pope’s legate has him stripped to the waist, flogged and dragged on his knees to the church altar and forced to swear support for the crusade.

The legate, Arnold Amalric, marched on Beziers in Southern France with 8,000 men and put 20,000 people to the sword. The crusaders, Moore says, intended to rule by terror, fueled by the mutual demonization that distinguishes ideological confrontations.

In one of the most notorious atrocities of the 20-year Albigensian wars in France, Simon de Montfort took the city of Bram in 1210. Rather than kill the garrison, the soldiers’ noses were cut off and their eyes poked out. The following year at Lavaur he killed the entire garrison. A “lady” who sympathized with heretics was thrown into a well and crushed with rocks, and de Montfort burned 400 presumed heretics to death in a meadow “with great joy.”

All this, along with the Fourth Lateran Council in 1215, was Pope Innocent III’s opportunity to enforce the war on heresy by expanding the role of the clergy — in short, it became the charter for the clericalization of society. It punished those who gave hospitality to heretics, confiscated heretics’ property and disinherited their children. When Innocent died in 1216, his corpse was stripped overnight of his magnificent funeral garments and left in the cathedral putrid and almost naked. Under his successors the persecutions continued through the trumped-up trial of the Knights Templar in 1314.

Moore concludes that hard evidence of a large population of heretics is scarce. Yet Innocent III’s wars and inquisitions achieved two goals: the centralization of power, by breaking down small communities who might resist, and the practice of demonizing any pocket of resistance as evidence of a universal conspiracy that menaces society and divine order.

If contemporary readers hear echoes of these “crusades” in the McCarthy witch hunts, the “war on terror,” contemporary politicians branding their progressive opponents as “socialists” or today’s tensions within the church, they are free to do so. But the last word belongs to a Catholic knight in Toulouse who, when the bishop asked why he had not expelled the local heretics, replied, “How can we? We grew up together. We’re kinsmen. Every day we see their worthy and honorable lives in our midst.”

[Jesuit Fr. Raymond A. Schroth is the literary editor of America magazine.]

Bullet in author's back teaches him forgiveness

'Doctor Strange' is visual feast with opportunities for catechesis

The landscapes of Dark Ages