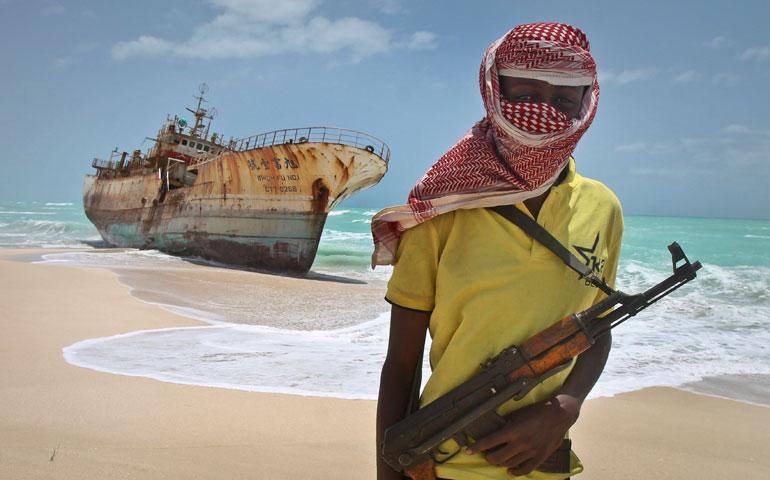 In Hobyo, Somalia, in 2012, masked Somali pirate Hassan stands near a Taiwanese fishing vessel that washed up on shore after the pirates were paid a ransom and released the crew. (AP Photo/Farah Abdi Warsameh)

THE END OF POWER: FROM BOARDROOMS TO BATTLEFIELDS AND CHURCHES TO STATES, WHY BEING IN CHARGE ISN’T WHAT IT USED TO BE
By Moisés Naím
Published by Basic Books, $16.99

What do hedge funds, the tea party, Somali pirates and Pentecostal churches have in common? According to Moisés Naím, each represents a challenge to established, hierarchical, bureaucratic power, a characterizing feature of our unsettled age.

The End of Power: From Boardrooms to Battlefields and Churches to States, Why Being in Charge Isn't What It Used to Be is a wide-ranging, stimulating romp through the last 20 years or so in search of a universal explanation for the unraveling of the well-ordered, predictable postwar world of the late 20th century. That world was the culmination of a centuries-long process of nation- and society-building that saw a consolidation of political, economic, spiritual and military power in large organizations. For those at the top, it was a comfortable world.

Naím comes to this search honestly. He recalls that, as a minister in the Venezuelan government, he learned how little he could actually make happen. There was "an enormous gap between the perception and the reality of my power." Yet it would be wrong to think these are the reflections of a cranky elder. The End of Power is at heart a fundamentally optimistic attempt to come to grips with the increasing pace and scope of change.

His definition of power is straightforward: "the ability to direct or prevent the current or future actions of other groups and individuals." Power flows through four channels that he calls muscle, code, pitch and reward. Muscle and reward are self-explanatory. Code is expressed through expectations, culture and morality; it is taught. Pitch is the world of persuasion, of perception. All of these forces worked together in varying degrees and combinations to make the world in which Naím grew up and in which he presumably expected to live out his life.

His survey of recent history leads Naím to ask if power is decaying, if dispersed, marginal forces are undermining muscular, bureaucratic powers. Enter Somali pirates to disrupt vital economic routes, hedge funds to outwit traditional financial institutions and their regulators, tea party activists to short-circuit the plans of a president and upend the traditions of a historically regimented political party, and Pentecostal ministers to poach the flock of a complacent hierarchy.

Naím sees power in the modern world through the prism of the market. Power is not autonomous. Its possession is subject to market forces. Deep structural demographic, economic and communication forces are transforming the power market, lowering the barriers to entry.

Why is this happening now? Three concurrent revolutions -- more, mobility, mentality -- account for the change. The world grows: more people, goods, weapons, countries, preachers, criminals. The world shrinks: It is easier to migrate and to return home, to move to a city, to breach a border. The world becomes more transparent: Education expands expectations; the impossible seems possible. The barriers to power are swamped, circumvented, undercut.

Confronted by these changed circumstances, those in charge search for a response and are hampered by the very factors that characterize their power: their size and their bureaucratic hierarchical organization.

Asymmetry prevails. Change is nimble, its tools cheap. Order is neither nimble nor cheap. Think of Somali pirates in their outboard runabouts with aircraft carriers in not-so-hot pursuit. Financial markets and their regulators have been serially flat-footed by collateralized debt obligations, dark pools, high-frequency trading.

Furthermore, the cost to those in charge is not always measured in economic terms, as governments in countless countries realize when they use muscle to confront street protests or drones to fight insurgents. The resultant loss of legitimacy in the eyes of their citizens is a cost also.

It is not just lords temporal whose world is shaken, but lords spiritual as well. Charismatic, evangelical, Pentecostal Christianity dislodges Catholicism from its dominance throughout Latin America.

Pentecostal ministers, following classic entrepreneurial practice, saw a market in neglected and disenfranchised burgeoning urban communities. Unconstrained by rigid doctrine, unburdened by close collaboration with traditional power, they found a market niche and transformed the spiritual world of a continent almost overnight. New churches grew as the communities grew, providing material and spiritual support to the millions of newly urbanized.

Naím notes that the cost of heresy today is low, especially in communities that are already disrupted by the three revolutions. Traditional religious bonds dissolve or are left behind as people move to the cities. Naím is much too charitable to note that the church blew whatever chance it might have had to protect its flock from the predations of these false shepherds when Pope John Paul II quashed indigenous liberation theologians.

But is all this simply the same play we've seen before with many more actors speaking new lines in new languages at a faster pace? Did Augustine, contemplating the sack of Rome by the original Vandals, feel the same way? Burning at the stake wasn't an option for Martin Luther, so what did Pope Leo X think lay ahead? How did Philip II of Spain feel about all those English pirates wreaking havoc on his golden galleons?

Change is a constant and can rarely be blocked for long. Nor does Naím believe these developments spell doom, even for those in charge.

Naím cites the possibility of a more interdependent world with less focus on dominance and more on cooperation. He admits that there are no simple solutions, but he looks to a restored model of political engagement where political parties once again become the channel for people to work for the common good. But then what does being in charge mean for those who are in charge? Following Naím's evidence, it would appear that those in charge, whoever they are, face a prolonged period of uncertainty.

And the rest of us? We are either along for the ride as passengers or we can jump in our own outboard runabouts.

A version of this story appeared in the Aug 1-14, 2014 print issue under the headline: Our unsettled age shakes the powerful.