SWORD OF THE SPIRIT, SHIELD OF FAITH: RELIGION IN AMERICAN WAR AND DIPLOMACY
By Andrew Preston
Published by Knopf, $37.50

Two years before the United States went to war with Mexico in 1846, one could read in the Family Christian Almanack an article, “Expenses of War,” in which the author added together the costs of America’s wars from 1776 to 1815. He observed that it would have been better to spend the money “to furnish every family in the world with a Bible: to provide the means of common education for all its children, and to support one minister of the Gospel for every thousand souls.”

While the math may be suspect, the sentiment could not be clearer: the juxtaposition of war and its cost with the Gospel and its benefit. The author’s universal view stands out. The comparison is not limited to the United States; no, there is a clear missionary goal here as well. 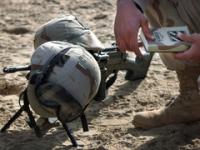 This lies at the heart of Andrew Preston’s magisterial -- 832-page -- survey, Sword of the Spirit, Shield of Faith: Religion in American War and Diplomacy. Begun as President George W. Bush prepared his faithful for war in Iraq, the shadow of that yet-to-be-accounted-for misadventure hangs over this book. Preston wondered why Bush used religious rhetoric and imagery and asked: Was this usual, did other presidents do this? His short answer is that religious rhetoric and the underlying sentiment were firmly embedded in American civic life from the first English footsteps on the continent. One might also observe that such invocations are effective, at least initially.

Studies of American foreign relations are countless, as are studies of religion in America, but Preston traverses less familiar territory, the interplay of the two. He detects two major currents running through this history. The sword of the spirit wages war in the name of God and is sustained by the idea of American exceptionalism -- all the rage among some in the current electoral climate -- and manifest destiny. The shield of faith, somewhat benignly neglected these days, promotes peace and is expressed in anti-interventionism, anti-imperialism and internationalism.

Preston’s task is not easy. Religion in America is not a static subject. For instance, New England Protestants wielded the sword of the spirit against two enemies, Native Americans and the Roman Catholicism embodied in New France to the north. Preston calls colonial America a reformation society, stressing individual conscience, born in opposition to the authoritarian church of Rome. He adeptly traces the changes of the nation’s religious fabric, weaving in new faiths, changing faiths and attitudes. He manages to find common themes that emerge at critical junctures. He notes that as colonial Protestants believed they could not live surrounded by Catholic tyranny and survive as Protestants, in the 20th century Americans came to believe, whether in 1941 or 1961, they could not survive as a democracy surrounded by tyranny, whether fascist or communist. 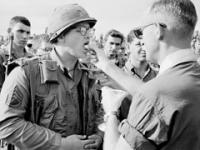 It would be wrong to assume that religion merely accompanied our diplomats and warriors. The cross often led, the flag often followed. Throughout the nineteenth century, America was most often represented in Asia, Africa and the Middle East by missionaries, largely Protestant. In 1900, mission property accounted for a fifth of U.S. direct investment in China. More recently, American missionaries are often credited with providing Bush with the crucial impetus for his President’s Emergency Plan for AIDS Relief (PEPFAR), though others might give more weight to his need for a shield of humanitarianism to balance his naked sword. In any case, there is little doubt that religious sensibilities account for PEPFAR’s failure to support effective HIV prevention programs.

Nor have America’s religious communities been silent when it comes to war. Preston observes that World War II gave the newly emerging Pentecostal churches the opportunity to move to the mainstream of American life through their wholehearted support of the war effort. Later their strong anticommunism completed the transformation, as evidenced by the trajectory of Billy Graham. The war in Vietnam engendered the largest antiwar movement in American history and as Preston notes, religious leaders were firmly embedded in the movement. Vietnam presented the dueling images of the Fathers Berrigan and other Catholics destroying draft records and Cardinal Francis Spellman firmly embedded among the troops, as fervent a supporter of the war as Bob Hope.

Preston delivers a stimulating, nearly encyclopedic study that adds texture and depth to America’s history of war and peace. Along the way, he sketches the sometimes surprising religious roots of familiar names in diplomatic history such as John Foster Dulles and George Kennan. He weaves in short histories of diverse denominations and social movements. And in the end he shows that Bush’s religious rhetoric falls naturally into place in the history of American warrior presidents. Religious belief has also served as fertile ground for various peace movements.

Yet the question remains, with religion as with other ideas and movements, just how much of a role it plays in any given situation. To understand that, if it can be understood, we would need to take into account as well the words and actions of those who expressed sentiments a little less lofty.

At about the time when Preston began to consider his question, Bush’s chief of staff, Andrew Card, expressed a more secular sentiment about preparations for the war on Iraq: “From a marketing point of view, you don’t roll out new products in August.”

[John Olinger, a lobbyist in Washington, D.C., is a former congressional staff person.]

Stories of the lives and deaths of writers

An evangelical case for LGBT acceptance