The threat of nuclear weapons has never really disappeared 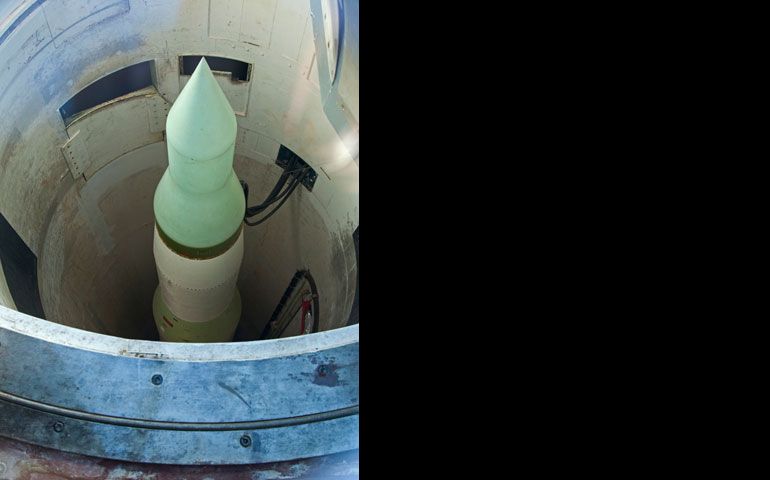 An unarmed Minuteman II missile, deactivated after the Cold War, in its underground silo near Wall, S.D. (Newscom/Image Broker/Jim West)

COMMAND AND CONTROL: NUCLEAR WEAPONS, THE DAMASCUS ACCIDENT, AND THE ILLUSION OF SAFETY
By Eric Schlosser
Published by The Penguin Press, $36

Back in the Reagan era, many of us read author Jonathan Schell's The Fate of the Earth with hushed awe -- though critics found the 1982 book's warnings about nuclear war overwrought, even silly.

To others, Schell's dire alarm did not seem abstract at a time when the Cold War felt fully revived. Among those entering the fray were the U.S. Catholic bishops, whose 1983 pastoral letter on nuclear war was greeted with both acclaim and vitriol.

A decade later, with the Cold War over, the worry over nuclear weapons fizzled out of public consciousness. The world turned its attention elsewhere, and the threat of nuclear war seemed to disappear with it.

Eric Schlosser's hefty, 600-plus-page Command and Control: Nuclear Weapons, the Damascus Accident, and the Illusion of Safety (selected as one of The New York Times' "most notable books" of 2013) is a reminder that the threat never really disappeared. Nor will it, as long as human beings have their hands on nuclear weapons.

These weapons, Schlosser writes, "are a collective death wish, barely suppressed. Every one of them is an accident waiting to happen, a potential act of mass murder. They are out there, waiting, soulless and mechanical, sustained by our denial -- and they work."

Schlosser's is a sober (though not technical) read that begins with a chilling narrative of a perilous near-miss: a September 1980 accident in Damascus, Ark., in which a seemingly minor event, the dropping of a socket wrench at a missile silo, turned into a potentially dangerous disaster.

The tool pierced the fuel tank of a Titan II missile, launching a series of mishaps that eventually caused the missile (but not the nuclear warhead attached to it) to explode. Had things gone differently, the "Damascus accident," as it is now called, might well have obliterated the state of Arkansas.

The Arkansas disaster is the primary example on which Schlosser constructs a narrative exploring how the United States military and its overseers have tried to "manage" the Faustian bargain of harnessing the atom. Or put another way: How do you keep ever-increasing numbers of nuclear weapons in the nation's back pocket always at the ready while trying to keep them "safe" and under control?

It has not been easy, and Schlosser provides countless examples -- after a while, you begin to lose track of how many there have been -- of near-misses, near-calamities and near-disasters. (And these are only on the U.S. side, for the most part.) Many involve crashes of nuclear-armed planes in which, miraculously, nuclear warheads did not detonate.

Among those deeply troubled by all of this is Scott Sagan, a onetime consultant to the Joint Chiefs of Staff who now teaches at Stanford University and is quoted by Schlosser.

Like many, Sagan once believed that nuclear arms offered a kind of assurance of global security. But Sagan now believes that the "ability to control high-risk technologies" is, in many ways, a fool's game. Good fortune, rather than "good design," may explain why there has yet to be a catastrophic accident with a nuclear weapon, he argues.

I hesitate to call Command and Control a magisterial book -- there are many moments of (appropriate) black humor, and there's a gritty journalistic take on the subject that places it in a different category than say, Richard Rhodes' multi-volume set of some of the same material. (Up until now, Schlosser has been best known for his best-seller Fast Food Nation.)

Command and Control probably could have, and should have, been trimmed some. There are moments when Schlosser's extensive reporting and research almost seem too exhaustive and the narrative begins to flag a bit. Nor is the intercutting between the Damascus incident and history of the arms race always seamless -- the events in Arkansas are lost for large segments of this otherwise commanding book.

One other caveat: Schlosser focuses little attention (and to my mind, perhaps too little) on the anti-nuclear movement, arguing that it has "failed to generate much popular support." Of course, as NCR readers know, pockets of anti-nuclear protests have always existed in Roman Catholic, Protestant and Jewish peace circles. True, those numbers are small. But the activists committed to a vision of a nuclear-free world deserve credit and our thanks for staying with this issue for so long.

I do take Schlosser's point that, in some ways, the worry about nuclear weapons may seem like a holdover from a different era. "Almost half of the American population were not yet born or were children when the Cold War ended," Schlosser writes, noting that, to many, the issues raised by nuclear weapons can "seem hypothetical and remote."

True enough. It has been 30-some years since I read The Fate of the Earth and we're all still here. And yet, is that just dumb luck, or something else? U.S. Gen. George Lee Butler said that at the end of the Cold War, humanity had (so far) escaped "a nuclear holocaust by some combination of skill, luck, and divine intervention, and I suspect the latter in greater proportion."

[Chris Herlinger is a New York-based freelance journalist and a frequent contributor to NCR on humanitarian and international issues. He is also the senior writer for the humanitarian agency Church World Service.]

Justice | The threat of nuclear weapons has never really disappeared

Oh, God of justice, come to our aid

Editorial: Both sides must look for alternatives to violence in Middle East

One year later, advocates pressure for charges to be dropped in toppling of Serra statue