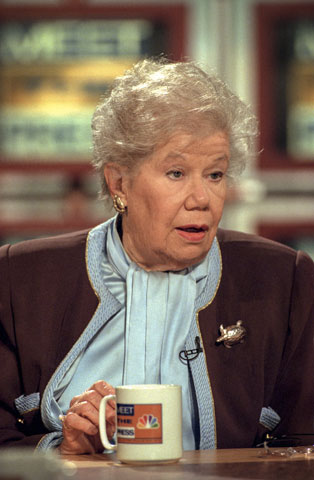 MARY McGRORY: THE FIRST QUEEN OF JOURNALISM
By John Norris
Published by Viking, $28.95

One afternoon in 1964, alone in her apartment, Mary McGrory, a talented columnist for The Washington Star who had quickly established herself as the first woman journalist to move up in a male-dominated profession, received a phone call from a man who identified himself as a Secret Service agent. President Lyndon Johnson was to stop by her apartment in 15 minutes.

Surely, thought McGrory, it's a joke. But she looked out the window and Secret Service men had already staked out her building. In a few minutes, the leader of the free world was standing in her doorway.

She poured him a tumbler of Scotch and they engaged in small talk, until finally he said why he had come: "Mary, I am crazy about you." He wanted to sleep with her.

Perhaps he was still competing with John Kennedy, with whom McGrory had been close, or perhaps he thought a sexual relationship would moderate blistering criticisms in her popular column. Or since she both flirted with and kept powerful men at arm's length, Johnson was challenged to assert his masculinity.

Or, as McGrory wrote later, "the president did not wish merely to be elected, he wished to be loved."

John Norris's excellent biography, Mary McGrory: The First Queen of Journalism, offers a balanced portrait of a complex woman; critical profiles of presidents and politicians, some of them hypocrites and scoundrels, who dominated America's 20th century; and an intimate sketch of a woman of faith who, according to Watergate co-conspirator John Ehrlichman, "would have been a Jesuit priest if only she'd been a boy."

Born in Boston in 1918, her father, whom she idolized, was a Latin scholar and postal clerk, and her mother, a deeply religious disciplinarian whom she rarely mentioned, was a part-time accountant.

At the excusive Girls' Latin School in Boston, she learned to love to read and even thought of becoming a nun. She graduated from Emmanuel College and enrolled in a secretarial school to master reporter's skills -- typing and shorthand. She yearned to work in a newsroom. She took a job at The Washington Star as an assistant book critic and quickly moved up to profiling politicians as a liberal columnist in a conservative newspaper.

Traveling in Italy, she was enamored with an Italian man who wanted to have sex with her and marry her. This became a motif through the 80-plus years of her life. Her identity as a journalist overwhelmed her feelings for a string of charismatic and ambitious men who either fled her influence or disillusioned her with their sexual escapades or their moral cowardice. These included John Kennedy, Ted Kennedy, Bill Clinton, Eugene McCarthy, Richard Nixon, Ronald Reagan, George W. Bush, and the man she really wanted to marry, the already-married Blair Clark, a journalist and campaign manager for McCarthy.

During the 1968 presidential campaign, by the norms of objective journalism, she should not have been writing about these men and advising them at the same time. But she saw herself as a reporter with a license to deliver her opinion; she did not hesitate to zing them in a column when they disappointed her.

When McCarthy and Bobby Kennedy fought for the 1968 Democratic nomination, she said McCarthy had only two advantages: "He has been smarter and braver." McCarthy had opposed the Vietnam War while Kennedy waited till after the Tet Offensive and Johnson's withdrawal. But McCarthy's bitterness, referring to both Martin Luther King Jr.'s and Robert Kennedy's killings as if they had been "asking for it," shrinks his status in this story.

She was not an investigator but an observer, producing three or four columns a week, first for the Star and then The Washington Post, syndicated in 187 papers. She traveled around the world, often on the president's plane.

She could write about Jane Austen or her garden or go to the mat with Sen. Joe McCarthy, Nixon or Reagan.

When Nixon quit, she wrote, "Richard Nixon's small store of pity had always been reserved for himself."

She described Bobby Kennedy: "Seen up close, Kennedy is a different man. Gray flints at his temples. His face is lined and gaunt. His blue eyes are blank and hunted."

She dared to ask Sinn Fein spokesman Gerry Adams about the Irish Republican Army: "Was it really necessary to shoot all those fathers in front of their children?"

Being her friend had its costs. As she got older, she became more the "queen," quick-tempered, critical. Her gait slowed. She still loved to party, to drink and smoke -- though she gave up the cigarettes and put on 22 pounds.

Meanwhile, her commitment to Catholicism glistened. When Reagan called upon the rich to help the poor, while he cut government funding of social programs, she asked him if he would increase his own charitable donations. He replied that he gave 10 percent. She knew that in 1980 he had given $3,089 out of his $227,968 in earnings.

She, however, gave 20 percent to charity, particularly the St. Ann's Infant and Maternity Home, near Dupont Circle in Washington, for unwed mothers and their children. For five decades, she worked there every week, enlisted her peers to help with the Christmas party, and drove the children out to swim in Robert Kennedy's backyard pool.

She took her religion seriously, disapproved of premarital sex and abortion, kept Thomas à Kempis' Imitation of Christ on her nightstand, identified with liberation theology, prayed on her knees every night, and felt the church had not measured up to its obligation to the oppressed.

Retire? "I am going to die in the newsroom -- it's like oxygen to me." She won the Pulitzer Prize in 1975 and the Franklin D. Roosevelt Four Freedoms Award for freedom of speech in 1995, and the first Robert F. Kennedy Lifetime Achievement Award in Journalism in 1995.

She kept writing into her early 80s, suffered a stroke in 2002, and died at 84 in 2004. Our author fails to describe the funeral at the Shrine of the Most Blessed Sacrament with the congregation of journalism's and Washington's stars warming to the eulogy by her cousin Brian McGrory.

He listed her loves: the press galleries, news conferences, the Star and the Post, her own meatloaf, Tip O'Neill singing Irish ballads, peace not war, nights not mornings, the color red, dogs bringing people together, and a finely reported column with a sense of place and a string of facts.

A version of this story appeared in the Jan 15-28, 2016 print issue under the headline: 'Queen' columnist was a woman of faith.